Is the iPod making us more self-absorbed?

I have an iPod shuffle. I have it for two reasons: one, I like to listen to it when I attempt the cardiovascular exercise known as running, which in my case is (fittingly) a kind of shuffle; and two, I’m too cheap to buy an iPod. 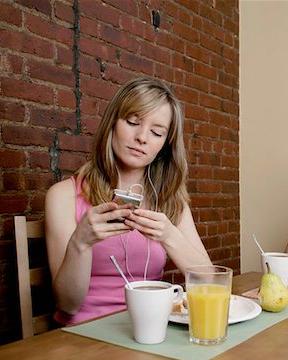 I have an iPod shuffle. I have it for two reasons: one, I like to listen to it when I attempt the cardiovascular exercise known as running, which in my case is (fittingly) a kind of shuffle; and two, I’m too cheap to buy an iPod.

But it’s not only when I exercise that I listen to my shuffle. Sometimes I bring it with me when I’m taking a long trip on the train or bus; other times I don my headphones when I’m running errands. I listen to it as I make my daily trek to the grocery store or pet store because it passes the time and makes the routine seem a little more fun.

As I walk, I’ll see other people doing the exact same thing. Occasionally, I’ll wonder, (perhaps morbidly) what if someone was calling for help and all of us were too wrapped up listening to Pink that we couldn’t hear?

When I turn up the volume on Van Lear Rose, I realize there are other things I’m potentially missing out on, too: like the sound of the birds chirping in the early morning and dogs barking in the local park (on the plus side, I’m also deleting the car horns and construction worker-related hooting.)

When did tuning out on nearly every aspect of our lives become the status quo, and how is the ubiquity of music changing the way we interact socially and politically? It’s this topic that writer Nikil Saval explores deeply in an article for n+1 (you can read an excerpt of it at slate.com, here.)

Saval’s piece brings up a lot of theories about how the way we listen to music has evolved in relation to technology and how that in turn has altered our social and political behaviour. Is the iPod’s cosy little mini-island of sonic nirvana making us less socially aware? Less proactive when it comes to righting the world’s wrongs? If you compare our culture to that of our parents and grandparents, where folk music was linked to the Civil Rights movement and even Beatlemania and Elvis ushered in the sexual revolution, it’s hard not to wonder what, say, Katy Perry brings to the table other than an affection for candy?

Should we ask more of life and music than just simple distraction? And should we ask more of ourselves in relation to one another? Saval’s article has got me asking myself these questions this morning. Maybe I’ll leave my shuffle in my coat pocket for a couple of days and hope I come up with a few answers.