Is the Conservative mat leave plan all it's cracked up to be? 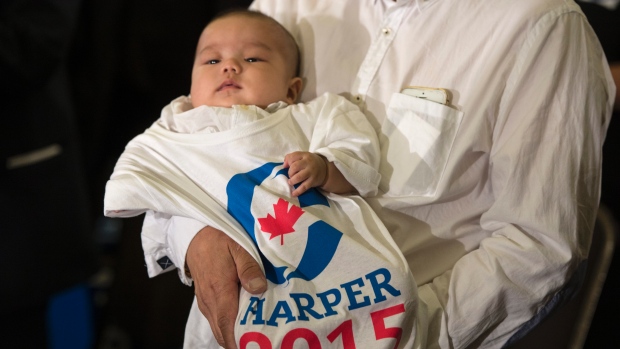 On Wednesday, the federal Conservatives dangled quite the juicy carrot in front of young Canadian families headed to the polls: Up to 18 months of job protection whilst on maternity or parental leave, the choice to stretch Employment Income benefits out just as far and a dash of incentive for parents to make some extra cash on the side. New pilot programs would make it easier for self-employed parents to combine paid work and time off with the new baby, said the Tories, while touting the plan as a “game-changer” for working families.

The pledge matches — and, in many ways, attempts to best — the Liberal plan announced in August, which lets new parents access benefits in portions for up to 18 months and gives them flexibility of taking time off and returning to work during that period. Last month, the NDP promised five more weeks of parental leave for single and two-parent families. How do we make sense of the latest big shiny promise for families, spun as happy news at a tense time in the federal election campaign? Here is a breakdown:

Who would this promise immediately impact?

Seventeen thousand “federally regulated employees,’ ie. people who work for the federal government, would be the first affected by the promised changes to the federal labour code in 2016, should the Conservatives be re-elected. That’s a relatively small portion of the workforce. Leave provisions for non-government employees fall under provincial and territorial labour codes, but the party says those jurisdictions have, in the past, adjusted their policies to reflect what’s offered by Ottawa.

How would it impact them?

The Tories are promising more time on leave, but not necessarily more money. Right now, Employment Insurance benefits max out at 35 weeks (or eight months). That, paired with 15 weeks of maternity benefits, gives parents coverage for a baby’s entire first year, the party says.

The Conservatives say those who want to receive the maximum rate of EI can opt for 35 weeks of benefits. Those who choose to extend their leave an additional 26 weeks (to reach 18 months total) will receive the same amount of money stretched over that time.

How would this affect women earning income on the side?

Everyone on EI in Canada is entitled to 55 percent of their average weekly earnings, up to a maximum of $524 a week (or a maximum salary of $49,500 a year). Right now, women receiving parental benefits are limited in how much self-employment income they can bring home while on leave: Half of every dollar they make is deducted until they get to 90 percent of their weekly insurable earnings; after that, every dollar they earn is deducted from their benefits. Women receiving maternity benefits can’t earn any extra income at all—it’s docked from their EI.

What Harper is proposing is to let everyone—including women on mat leave—keep more of the money they’re making themselves. Workers can top up their EI income to 100 percent of their average weekly earnings, up to a maximum salary of $50,800 next year. Under that plan, they’ll make up to $537 in EI and can earn another $439 in self-employed work, for up to 976 bucks a week.

Of course, not everyone is going to pull that: In 2011, Canadian women averaged $32,100 a year, so they’d only be entitled to another $278 in weekly income (to top off their EI benefits of $339 a week). That’s a decent amount of cash, though, if you’re in a position to make it—you know, in all the entrepreneurial spare time that a newborn leaves you.

Eighteen months of mat leave sounds great. But is it good for my career?

At this point, the short answer is “no,” says Kate McInturff, senior researcher at the left leaning Canadian Centre for Policy Alternatives. Studies show longer maternity leaves actually make it harder to get back into the workforce.

“Once you exceed between six and 12 months of parental leave, it becomes very very difficult for women to get back into the workforce,” she said. “And the women who are most impacted by that are the more highly educated and higher earning women — the women who have the greatest capacity to contribute to their family’s financial well-being are the ones who are going to see their attachment to the workforce weaken if they take that 18 months.”

This is often because they are in fast-paced, demanding careers in which presence and output makes a huge difference for advancement.

With files from Danielle Groen.