Is 'pageant mom' another way of saying 'clinically insane'?

File this story under “Vile,” with a capital “Creepy.” And then be sure to forward it to all your friends (I know I did!) Toddlers and Tiara’s supersize moms and dads, with their “flippers” and their portable fake tanning stations, have nothing on this San Francisco-based mother. 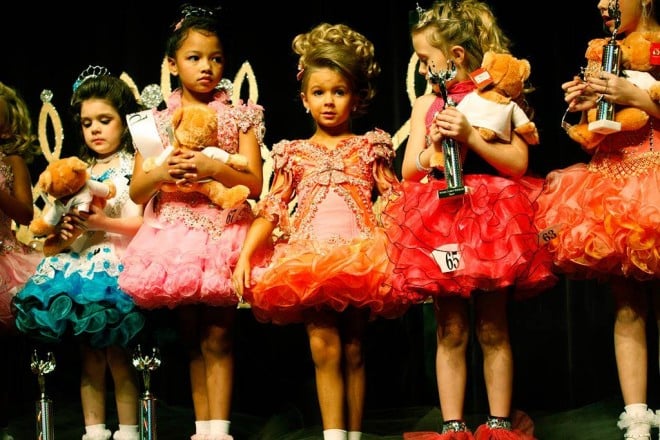 File this story under “Vile,” with a capital “Creepy.” And then be sure to forward it to all your friends (I know I did!)

Toddlers and Tiara’s supersize moms and dads, with their “flippers” and their portable fake tanning stations, have nothing on this San Francisco-based mother.  In an interview with English tabloid, The Sun, 34-year-old beautician/pageant mother Kerry Campbell admits she injects her eight-year-old daughter, Britney, with Botox on a regular basis. The filler, in her mind at least, will make her daughter even more beautiful and will slow the development of wrinkles as she ages.

Making matters more disturbing—you’ve got to give it The Sun, they really know how to find noteworthy characters—the beautician buys the toxic injectable online and performs the procedure on her daughter herself.

According to Kerry, Botox, rather than say the combination of talent and discipline, is going to help her daughter become a star. Says Kerry: “I know one day she will be a model, actress or singer, and having these treatments now will ensure she stays looking younger and baby-faced for longer.”

If you’re eating while reading this, I advise you to swallow before you take on the next bit, because it is going to make you feel a little queasy.

In service of her future ambitions, Kerry also takes Britney for full body waxes. The waxing ensures the child is as hairless as a Barbie doll, even into puberty. Explains Kerry: “She also has her virgin wax monthly, which gets rid of her fluffy leg hair and makes sure she won’t develop pubic hair in the future.”

I don’t know about you, but if my mother had even said the words “pubic hair” in a sentence when I was eight years old, I would have swallowed a vial of Botox to avoid hearing her say it again. I think I might do that now.

Kerry Campbell may not be winning any mother of the year awards in 2011, but her outspoken stance on the necessity of Botox for kids does have one odd benefit (though sadly none for little Britney). It makes us realize how dangerously ridiculous our obsession with youth and “fame,” whatever Kerry Campbell believes both of those words to mean, has become. Kerry Campbell has a case of the ‘fame crazies’ and here’s hoping that the same brilliant minds that came up with Botox can cobble together an equally potent cure for that highly contagious disease. May I suggest it comes in suppository form?