In debt do you part

Divorce can leave you emotionally shattered – and financially crippled. Increasingly, unhappy couples are staying together because they can’t find a way to break up without going broke 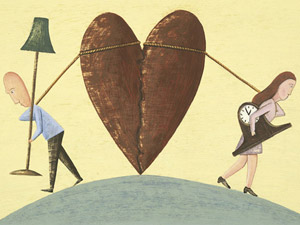 They met in the ’80s at a record shop in Ottawa. At the time she was really into everything French. The language. The wines. And the men. He was French. A decade later they were married, avec deux enfants. Then came the drawn-out, slow-motion fizzle. It came down to this: He was neat and repressed. She wasn’t. “The cracks first started to appear after our second child,” says Miriam*. Between parenting and their jobs – he worked full-time in communications, she picked up editing and writing gigs part-time – they weren’t spending much time together. And when they did, they discovered that the differences their love once allowed them to ignore now caused fights.

By the time both kids were in school, Miriam and her husband were close only in the spatial sense. They lived in the same house. But emotionally they were like Moncton and Mumbai: worlds apart. She wanted to split up, even though she felt intimidated at the thought of taking on financial independence. And then there was the cost of a divorce.

Ending a marriage can be even more expensive than the wedding. The cost of splitting one household into two, with double the insurance and utilities bills and everything else, is fearsome enough. But even before you get to that, there’s the cost of the divorce. Hiring a top-notch family lawyer to argue your side can cost upwards of $500 an hour, although many lawyers charge only half that. Still, the overloaded court system digests those billable hours like they’re Flintstones vitamins.

Plenty of people feel like they’re too broke to end their marriages, says Michael G. Cochrane, a Toronto divorce lawyer and the author of Surviving Your Divorce: A Guide to Canadian Family Law, recently released in its fourth edition. In fact, he says, most marriages experience a lag between the end of the relationship and the decision to actually separate. And one of the biggest reasons for that lag is financial. “The couple will know they’re done,” says Cochrane. “But no one else does.”

* Name has been changed.

According to Cochrane, contested divorces are becoming increasingly expensive, the unintentional result of a round of family law reform that swept Canada in the mid-’80s, which put the emphasis in a separation agreement on a couple’s financial worth, spawning a still-developing industry of expensive consultants, such as forensic accountants and real-estate appraisers. Once lawyers get involved, Cochrane says, you can expect to pay $10,000 just to get a contested divorce into its beginning stages; it’s not unheard of for long, drawn-out, complicated splits to skyrocket to $250,000. “With a moderate amount of conflict,” Cochrane says, “most people will spend at least $15,000 to $20,000 per person to divorce.”

Hence, the marriage trap. Once they’ve fallen out of love, married couples endure various messed-up living arrangements to avoid actual separation. Some live essentially parallel lives. Often, they’ll split up parenting duties, parcelling out kids’ music recitals or hockey games to avoid interacting. To maintain the facade of a happy family, they’ll continue to sleep in the same bed, or wait until the kids have gone to sleep before one parent creeps downstairs to a mattress in the basement. Other spouses will move to a guest room.

Miriam came up with a different arrangement. Rather than separate outright, she and her husband attempted a less-costly alternative they hoped would be better for the kids: They rented an apartment near their house, and the two parents bounced between beds while the children stayed home in their own rooms. “That was my wacky idea,” says Miriam. “And it failed. It meant I still had his presence all around me. It was a year that I didn’t get on with my life. By the end of it, we still had our joint bank account.”

Convinced divorce was the only option, but worried about the cost of lawyers, Miriam researched the alternatives. Places such as Staples sell do-it-yourself divorce kits. People who don’t want to be bothered learning the minutiae of divorce law can also use a service like Untie The Knot (www.untietheknot.ca), whose owner, David Shelly of Nelson, B.C., will complete the necessary paperwork for a fee ranging from $195 to $325, depending on the province. Even with the provincial processing fee, some divorces can be completed for less than a thousand dollars. But the reality is that most soon-to-be-ex husbands and wives want more guidance, especially when dealing with custody issues and the separation of shared assets. Miriam settled on a third option: mediation, a process that falls somewhere between do-it-yourself kits and high-priced lawyers.

Barbara Landau started working in the field of family law more than three decades ago as a psychologist, then went on to earn a master’s degree in law from Toronto’s Osgoode Hall Law School and practise as a family lawyer. Today, she’s most passionate about her work as a divorce mediator, an independent third party who helps couples negotiate a separation agreement without relying too much on the use of expensive lawyers. It’s mediation, she says, that leads to the least arduous, most efficient divorces. “I’m finding a lot of couples who come in who don’t want to pay to become enemies,” says Landau. “Mediation increases trust and decreases animosity.”

Mediators such as Landau charge between $100 and $300 an hour, or about half of what a lawyer will charge. And because one couple uses only one mediator, a mediated divorce often costs only a quarter of what a couple would pay two divorce lawyers, especially if the case goes through an increasingly backlogged court system.

If mediation helps to end an unhealthy relationship, that’s a good thing. “It can be tremendously liberating,” says Cochrane. It certainly was for Miriam. The process wasn’t exactly pleasant, but, working with a mediator, she and her husband breezed through the parenting plan, deciding on fifty-fifty custody of the kids.

The financial negotiations were more difficult. He was making $90,000 a year; her income was just $40,000, in large part, she felt, because she’d put her career on hold to raise the kids. Miriam felt she deserved alimony. He didn’t. During negotiations that dragged on over 18 months, the mediator helped them agree to a single lump-sum payment of $40,000, all of which she used to help pay for his share of the house. The total cost of her split tallied about $7,500. Miriam signed the separation agreement at Christmas, and the divorce was filed this spring.

Single parenthood is the emotional roller coaster she imagined it would be. The plus side is the relationship she has with her two sons, which is more healthy than it’s been in years because, Miriam says, she’s focused on her boys rather than repairing a broken marriage. Having filed the papers for her divorce this past April, she’s planning to throw herself a party when everything becomes finalized, complete with one French thing she hasn’t gotten over: Champagne. “It’s going to be a Veuve Clicquot party,” she says.