If you watch one video about the crisis in the Middle East, make it this one

In today’s news: one Libyan woman tries to tell her story; American women vs. Wal-Mart; the bald and beautiful; becoming a tween superstar; and Katy Perry’s mom is traumatized by her daughter’s boobs. 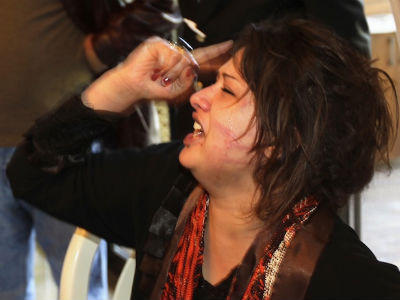 In Libya, a woman claiming to have been raped by pro-Qaddafi forces managed to reach foreign journalists in their Tripoli hotel. Bruised and disheveled, she tried to tell her story, but was quickly tackled and dragged away by hotel staff and those in charge of minding the reporters. Several journalists were also attacked, their footage of the incident confiscated. Though the woman’s story cannot be verified, it is in line with other accounts of torture and rape at the hands of Qaddafi supporters. This video of the incident made it out, and is a rare and chilling record of the current situation in Libya.

For the first time ever, a bald woman has been crowned a beauty queen in North Carolina. Sandra Dubose-Gibson was named 2011’s Miss Black Carolina this past Saturday. The stunning mother of two lost her hair to alopecia twelve years ago, and says that though the loss was depressing at first, in the end it turned out to be a blessing. Says Dubose-Gibson: “I am here to help [women] see the beautiful human beings they truly are and boldly celebrate that beauty and strength from the inside out.”

The U.S. Supreme Court will hear arguments over whether a class action sexual discrimination lawsuit should be allowed to proceed against Wal-Mart. The court will decide if the case will be allowed to represent some 1.5 million female employees, dating back to 1998. The plaintiffs claim they were consistently passed over for raises and promotion because of their gender. If they win, it will be the largest class action lawsuit ever, and will have a global impact on working women, and the working world in general.

What does it take to be a tween superstar? An excellent article in the most recent issue of the New York Times Magazine uses the example of iCarly star Miranda Cosgrove to illustrate the relatively recent phenomenon of the pre-sex female idol, and the accompanying perils of becoming one.

We got used to watching various fluids and objects explode from Katy Perry’s boobs a long time ago, but apparently that hasn’t dulled the shame of the singer’s more modest mother. Perry’s mom, Mary Perry Hudson, has written a book proposal in which she complains that, “no mother wants to see the top of her daughter’s boobs.” We think it’s safe to assume that no mother wants to see fireworks shooting out of her daughter’s brazier, either.