I introduce you to Warrant Officer Mark Atkins

After 6 months, "Ben" has finally returned home. So now that he is safe, I can introduce you to Warrant Officer Mark Atkins...the man behind the blog. 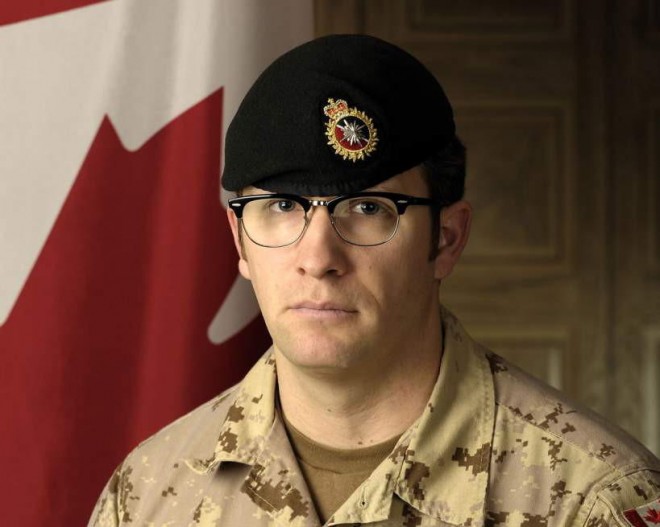 Today, I’ve been watching the news as Corporal Steve Martin, who was 24 years old, is on his way home after losing his life in the war in Afghanistan. There’s no good time to lose someone you love, but I can’t help but think of the Martin family and how they will cope this Christmas with the loss of a man they all loved. I, along with the citizens of Canada, will be thinking of you and sending you hope this Christmas.

So with the loss of our 154th Canadian soldier, I feel even more grateful to have “Ben” home safely. For the last 6 months since the blog began, I’ve referred to him as Ben, so as to protect his identity while overseas and not put him on the radar for anyone who might use the information against him.

“Ben’s” real name is Warrant Officer Mark Atkins, an Intelligence Operator who also works in Kingston, ON. Essentially, his job is to look for the bad guys and make sure our troops are aware of what they’re walking into when they enter a new environment. What kind of weapons do they have? How many soldiers? What kind of vehicles? What kind of fire power? These are all the questions Mark attempts to answer to keep our troops safe. All in all, his job is way more exciting than mine.

But since his trade is very small, it has meant that in 5 1/2 years, he has deployed to Afghanistan three times. Hopefully, this last tour was his indeed his last.

So who is Mark? It’s a hard thing to define the person you love. If there is anything you can say about him, it’s that he is kind. So truly and decently kind. He will give anything in this world if it means he can help another human being, to his own detriment. He opens car doors, holds the umbrella over my head and for the love of all that is Holy, he now shovels the driveway so I don’t have to. Mark is a father of two beautiful children that he absolutely lives for. But the one thing I’ve come to know best of all is that Mark is the ultimate soldier. He cares about the mission overseas and never stops looking at all the good effects we’ve had there, even when losing other soldiers makes that a hard reality to maintain. When it comes to his work, he’s very serious and gets easily frustrated when people aren’t motivated and dedicated. But it’s come to be a quality I admire about him. Mark cares deeply about his work because he knows that the military does work that matters. I hope he knows what a big part of that he’s been.

It’s funny, because I look at this photo of him and he looks so serious. I call it his “work face”. But then I feel so grateful that I never had to see this photo on the news, the one that would be shown if he had been killed, and I know that this serious face saved so many lives with his dedication and hard work.

So this holiday season, I have so much to be thankful for. My fiancé is home safe and sound, we’ll have a great Christmas and this photo can just be a fond memory that we’ll look back on later in life. Because this photo is just a part of our lives but not the end of his.

Merry Christmas, Chatelaine readers. May you also be take the time to appreciate the small qualities in your loved ones that all in all, make up the wonderful people we call family.