It’s not that my daughter doesn’t like my boyfriend — she really does. She just hates when he sleeps over, because what she doesn't like is not sleeping with me. 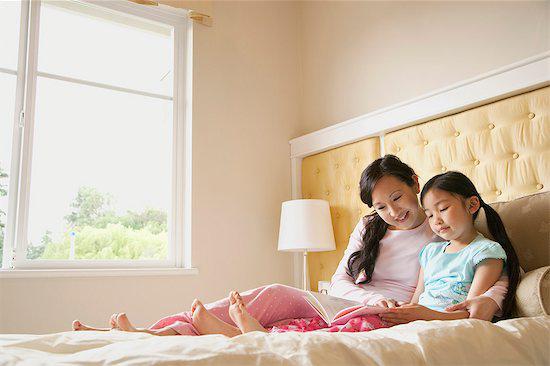 It’s not that my daughter doesn’t like my boyfriend — she really does. She just hates when he sleeps over, because what she doesn’t like is not sleeping with me.

Ever since she was three, my daughter and I have slept in the same bed. The truth is, I love to sleep with her too. There’s nothing that makes me happier than cuddling her, and feeling her arm thrown around me in the middle of the night. Plus, I have a really big bed — thankfully, because not only do I sleep with my daughter, I sleep with about 12 of her stuffed animals as well.

In any case, my boyfriend is at the point where he is sleeping over a lot. And, by a lot, I mean about four or five times a week. My daughter is not taking this well. In fact, she’s told me that he should sleep in her bed and that she should still get to sleep with me. She’s also told me that we can all sleep together, so she can still sleep with me. And, then, she once actually told me to drug him with children’s Tylenol to make him sleepy, so I can then come get her and bring her into my bed.

Every time he sleeps over, my daughter comes up with a reason that he shouldn’t be in my bed and that she should. Of course, I get this. I’ve let her sleep with me for years, and it hurts to see her hurt. It also hurts because although I do love my boyfriend, I still love sleeping with my daughter too.

Introducing a new man to a child is difficult at best. But, like I’ve said, the only problem my daughter has with my boyfriend is the sleeping arrangements. Other than that, they get along great. I could talk to therapists and experts about how to get my daughter to be “happy” to sleep in her own bed, but, frankly, even if I talked about it for hours, no one knows my daughter better than me.

So far, I think I’ve done pretty well in handling this situation. I’ve come up with some creative ways that makes my daughter more comfortable about having him sleep over. I’ll share them with you. Hopefully, all you readers who have been through this, or are going through this, will chime in and let me know what you do.

2. I reinforce to her all the time that she’s my favorite person in the world. I’ll say things like, “Even if he is sleeping in my bed, that doesn’t mean I don’t love you the most in the world.” I say this over and over again.

3. I bought her a calendar. My boyfriend, who has his kids 50 percent of the time, and I have to be organized with our sleepovers. At the start of each week, we sit down and she gets to write a check mark (she gets to sleep with me) or an X (she doesn’t get to sleep with me). She finds calendars fun, and also this way she’s more prepared for the days she knows he’s sleeping over.

4. I also bought her a pillbox, one of those plastic things people use to keep track of their medications. It’s the same idea as the calendar — it has the days of the week on it — but she gets to put Smarties in them. Blue Smarties means my boyfriend is sleeping over that day. Pink Smarties means she gets to sleep with me. Again, it gives her warning, and she thinks having Smarties in a pillbox is just plain fun. (And she gets to eat them too.)

5. I set my alarm, which is super loud, half an hour earlier than when we have to get up. She can hear this alarm and knows she can come cuddle with me in the mornings. This makes her happy.

6. I’ve made up an imaginary land that I tell her stories about. I tell her in our dreams we will meet there and do fun things, like slide down rainbows and take baths in whipped cream and fly on hot air balloons. She loves meeting me there and it makes her going to bed more easily, because at least in her dream she knows she can sleep with me (usually on a cloud).