How to properly give a thank-you speech

Okay, so it wasn't the Oscars and I wasn't an Oscar winner, like Hilary Swank who forgot to thank her husband when she won for her role in Million Dollar Baby. 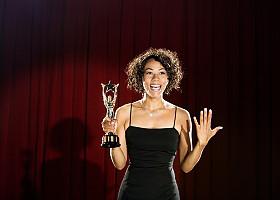 Okay, so it wasn’t the Oscars and I wasn’t an Oscar winner, like Hilary Swank who forgot to thank her husband when she won for her role in Million Dollar Baby. And, no, it wasn’t a wedding where I forgot to thank my parents for throwing the party, or thank my new in-laws for welcoming me into their family. But at my recent double-book launch for my new books, the novel “The Lucky Sperm Club” and the non-fiction “How to Raise a Boyfriend,” I did have to make a speech in a roomful of people and I did have to thank people and, yes – argh! – I did forget to thank some people, and I feel awful about it.

Although it wasn’t the Oscars and just a book launch, I take my book launches seriously. Unfortunately, I didn’t prepare a speech. I thought I would be just fine going off the top of my head – wrong, wrong, wrong.

Because my book launch occurred on the night of that major storm, I had been too stressed all day about whether people would show up or not (they did) and fielding calls about whether it was still on (it was).

So, when I found myself in front of the microphone, I had no cue cards to read of off. I didn’t even have a napkin that I had scribbled names on to remind me who I had to thank. (And I did have some champagne – which makes me funnier… but dumber).

Right after I finished my speech, I was just glad it was over. I thought I had covered all my bases – my family, friends, all those who came out during the storm, my publishers, my editors. But as soon as I walked back into the crowd, one of my freelance publicists said, “You didn’t thank me! Was that on purpose?” I felt awful. Of course it wasn’t on purpose. But I also felt it was a little inappropriate. I mean, it wasn’t exactly the best time to make me feel horrible considering I was supposed to be celebrating and hosting a party.

I also forgot to thank my assistant. Now this I felt really bad about. She’s become one of the most important people in my life and did so much work to help set up the book launch. I did apologize to her after, asking, “Did I thank you?”

She responded with, “No, but don’t worry about it. It’s nothing. Really, I don’t care.” Which was super generous of her and made me feel even worse.

How did Hilary Swank deal with forgetting to thank her husband in her speech?

On the other hand, who wants to be the person who thanks everyone – your attorneys and your third grade teacher and the guy who’s nice to you at the grocery store. People just get bored, people don’t like long thank you speeches.

So I spoke with an expert, a friend of mine who does a lot of speeches to ask what should and shouldn’t be done with speeches.

2. He says that it’s important to thank everyone in the room: But, it can be done in a quick, sincere way. Something like, “I appreciate all of you coming out, especially in this weather. I’m so grateful to have people in my life like you.”

3. I told him that I did want to thank certain people, individually, who really did help the books come together: “That’s fine. But if you really wanted to do that, and do it right, and not forget anyone, then you should have at least made a list and memorized it or have it in front of you.” (I know. I know. Lesson learned!)

4. He does agree however, that if you feel left out because your name wasn’t mentioned in a speech at an event, that it’s not the time or place to mention it: “That’s very unprofessional. If it really bothers you, you could make a phone call the next day or send an e-mail gently mentioning that you felt slighted.” He continues, “However, by the next day, if it’s not your husband, they probably would be over it and realize that it was just a mistake.”

5. As for my assistant, he says, I should definitely send her something: “Not just because you forgot to thank her, but because she did a good job, and that job should be recognized.”

In any case, at least I didn’t forget to thank my husband. But only, perhaps, because I don’t have one.