How to make more friends

Expand your social circle with these friend-finding ideas 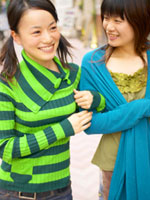 It wasn’t when she broke up with Aidan or even when she found out that Big was dating a 26-year-old. The most pathetic moment in Carrie Bradshaw’s Sex and the City life was when she moved to Paris with her lover, yet quickly found herself desperately lonely for her girlfriends. The image of her staring miserably at a group of Parisian amies laughing together in a café is one that every woman in search of friends understands.

These days, thanks to the Internet, it’s often easier to get a date than to find a friend to have coffee with. It used to be so easy – every new semester and part-time job yielded a plethora of women from which to pluck your next best friend, cocktail companion or workout buddy. But as we get busy with our careers, partners and kids, making new girlfriends starts to seem more daunting than scaling Everest. Add any of life’s big transitions to the equation – moving to a new city, becoming a mom, deciding to work from home or getting a divorce – and it just gets harder.

But there is hope. If you’re looking for a new lady friend in your life, here are some tips to help you succeed in your quest.

You’re not the only one

“Not having enough friends is increasingly common,” says Paul. “It’s important to realize you’re not alone – there are a lot of people out there who are looking.”

Kelly Goorevich, 33, feared she was going to be wandering the streets of Toronto alone forever when she and her young daughter moved there for her husband’s job. But she quickly found out that women going through major transitions, such as becoming a stay-at-home mom or going through a divorce, often have sudden openings for new friends in their otherwise busy lives.

“It took me a while to find the places to meet those people,” she says, admitting she’d stop people on the street with kids and ask them where to find the mysterious drop-in centres she’d heard about. “I met all these new moms who suddenly found themselves on maternity leave and had to expand their social scenes. They were as alone as I was even though they had lived here their whole lives.”

Use your flirting skills

“I walked into a store and was talking to the owner,” recalls Kate MacLennan, a 30-year-old writer who honed her friend-finding skills when she first moved to Vancouver. “I proposed we hang out since she was new in town,” she says. “She might have thought I was hitting on her since I asked her out on a hike.” Kate’s bold strategy worked and the pair became fast friends.

“In the beginning, when I was really lonely, I expected too much too fast and my feelings got hurt,” says Paul of her first doomed forays into friend-finding.

Gooverich tried the classic hang-out-in-the-neighbourhood-coffee-shop shtick. But even though she chatted with the same people every day and gave out her number, her phone never rang. “People just don’t think to include you,” she says. “It’s not that they’re leaving you out, and I had to get over that. People would be talking about how a bunch of couples and kids got together for pizza, and finally I said, ‘Next time you do that I’d love to come!’ It sounds a little pathetic, but I know I’m not a pathetic person. And my phone started ringing.”

Don’t act desperate (even if you are)

Making friends is a lot like dating: it’s always a good idea to take it slow. “Don’t be too clingy, don’t be too pushy and don’t dump your whole life story on someone the first five minutes that you know them. Let them slowly get to know you,” warns Paul. This works both ways: if your new acquaintance ends up being a nightmare, it’s easier to cut ties if you haven’t gotten too close.

After a long dry spell of no new pals, Justyna Krol, a 33-year-old graphic designer who moved to the West Coast for grad school in her 20s and ended up staying, came to the conclusion that the time for making good friends was over. Then she attended a professional workshop where she met name Amy*. “I saw her and she was kind of obnoxious and outrageous, and I thought, ‘She’s perfect, I have to have her,'” laughs Krol. You can’t be shy, because you might lose your chance. Joanne Stanton, a 34-year-old mom who moved from Toronto to North Carolina for her husband’s job, still rues the day she didn’t approach the groovy-looking mom she spotted at Whole Foods. “I saw her checking me out,” she recalls, “and I should have pounced on her.”

Where the girls are

• Take a class, any class!
• Join the gym, a book club or a community organization.
• If you have a hobby that involves online discussion groups, see if anyone in your web community lives near you and wants to meet in person.
• If you’re a mom, visit drop-in centres, which are usually found at your local libraries and community centres.
• If you’re new to town, particularly to a smaller community, start a newcomers’ group by advertising in the local paper or online forums.
• If you have a spiritual bent, start attending the religious meeting place of your choice.
• If you’re recently divorced or separated, support groups are fertile places for meeting other women in a similar boat. Find them through your family doctor or therapist.
• A lot of under-35s haunt web communities like Friendster.com, which is like a dating site for friends and professional networking. Do a search for women who share your interests and live in your city.
• Volunteer with a group that is passionate about the same things you are.

Are you thinking of dumping a friend? Here’s how!