The secret to staying on track? Maybe don't try so hard. 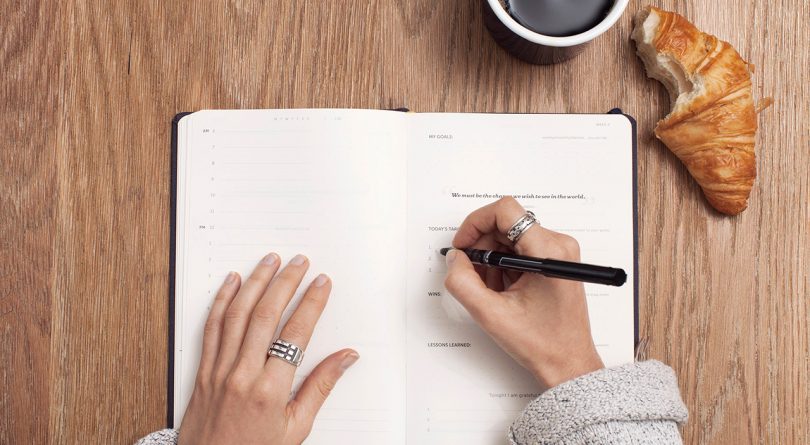 It feels so easy on New Year’s Day. You crack open a fresh notebook and jot down your resolutions one by one — each a promise you’ll be a better version of yourself in 2018.

A week in? It starts to get harder. Like, WAY harder. The frigid temps have made the couch/blanket/Netflix combo look a hell of a lot better than an outdoor run. And why don’t those holiday sweets just disappear the minute you flip the calendar?

But before you beat yourself up over it, take heart. According to a pair of Canadian researchers, self-discipline really isn’t the key to keeping your goals after all. A study published in 2017 by Marina Milyavskaya, an assistant professor of psychology at Carleton University, and Michael Inzlicht, a professor of psychology at the University of Toronto, found that meeting goals has a lot more to do with your relationship with temptation than your level of willpower.

The study asked a group of students at McGill University to set four goals at the start of their school year, then texted them surveys at random times during the semester to ask if they were feeling tempted to veer off course, and if so, whether they felt mentally fatigued. At semester’s end, students were asked how well they felt they had kept up with their goals; those who fought harder to fight temptation had less success and felt more down on themselves. “Effortful self-control, in contrast to prevailing views, played no role in predicting goal attainment,” Milyavskaya and Inzlicht wrote in the paper, published in the journal Social Psychological and Personality Science.

So how will all of this help you keep your goals in 2018? Milyavskaya has some tips:

Identify the temptation — and make a plan to resist it

So you want to eat healthier in 2018. What’s your plan for when Sheila inevitably brings a plate of chocolate cookies into the office? It helps to think of specific scenarios where you know there’ll be temptation so you can think through what you’ll do to dodge it, Milyavskaya says. For example, you can plan to say no to the cookies, or take a walk until the plate empties. And remember, we usually bend to temptation mindlessly and out of convenience and boredom — so if you have cookies in the house, get them out of the house!

Remind yourself WHY you made a resolution

Do you want to exercise because you want to feel stronger and healthier? Or are you more concerned with what others will think of you? The more personally meaningful the goal, the more motivated you’ll be to meet it. “A long line of research has found these more autonomous goals are more likely to be attained,” she says. Milyavskaya is researching this right now and thinks there are two possible reasons why: “People set up their environment better to experience fewer obstacles [or] the obstacles are not being experienced as obstacles.”

This will help you make it a habit — something that comes to you automatically, that you don’t need to think about, Milyavskaya says. It’ll also boost your confidence and make you feel like you aren’t climbing Everest, just taking things day by day but being intentional about it.

Don’t be so hard on yourself

“People are willing to use pretty much anything as justification” to cave to temptations, Milyavskaya says. So don’t get down on yourself — it’s not just you. That attitude might help you get back to the gym after a day of skipping out in favour of spending time with your partner, for example. There’s a tendency to think any kind of backsliding means you’ve blown your whole goal. But “everybody has small instances of giving in to temptations,” she says. So cut yourself some slack and keep going.

Have a support person

This isn’t a drill sergeant or a cheerleader, but someone you can talk with about your journey to meeting your goal. “Some of the research has found that someone saying ‘You can do it!’ doesn’t play much of a role,” Milyavskaya says. “What helps is having someone who will listen and understand and hears your perspective. Someone who’ll talk to you about how you’re feeling, without judgment.”