How to get your car ready for winter....why mine never is

Every year I know it’s coming and yet, every year I don’t do anything to prepare for it. I’m SUCH an idiot like that! This morning I woke up to snow all over my car. Shocking! It’s snowing in Canada! This is my thought process when I see snow on my car, after the first storm. 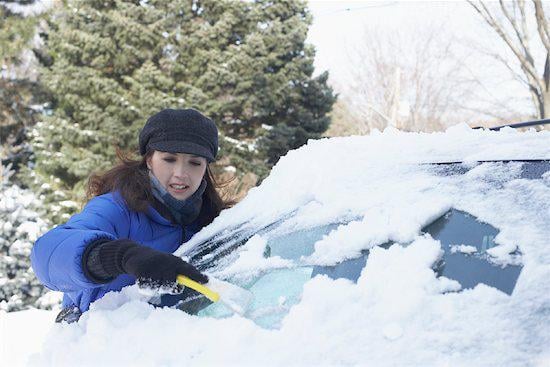 Every year I know it’s coming and yet, every year I don’t do anything to prepare for it. I’m SUCH an idiot like that!

This morning I woke up to snow all over my car. Shocking! It’s snowing in Canada! This is my thought process when I see snow on my car, after the first storm.

“OK, Where are my car keys? Ok, where is my snow scaping thingy? Do I still have the one from last year? Where is it? Is it in my car? Is it in the closet? Do I have enough windshield fluid? Do I have enough gas? OK, I’ve found my keys. That’s a start.”

After I put on my winter boots, I go out, turn the car and windshield defroster on full blast and my seat warmer. I can’t find my snow scraper in the car and wonder if the defroster will melt all the snow away. I head back inside. I also am SO mad at myself because there’s snow all over my front hallway now, and I realize this is how it’s going to be for months…and months…and months…

After a few minutes I go back out (grateful no one has stolen my car) and realize that the snow on the top of my car needs to be wiped off. If only I can find that damn scraper-thingy. I use the sleeve of my winter coat to wipe the snow off my mirrors, swearing about how disorganized I am, and how I promised myself I wouldn’t let this happen again. I also hate that I’m short. How is this short GIRL supposed to get through another winter without a driveway (or man?)

I know I need to go shopping for supplies. But Canadian Tire isn’t fun for me. I have a lot of guy friends who love it (Canadian Tire for men is like Shopper’s Drug Mart to women.)

And whenever I have to go to Canadian Tire there doesn’t seem to be anyone around to help. And I NEED HELP. I need to know exactly what I need to buy to get me through driving in winter.

I call my male friends. “What do I need for my car in winter?” I ask, planning a shopping list and trip.

“You should change your tires,” my first male friend says.

“You mean you have all season tires,” he laughs.

“Whatever. Just tell me what I have to buy!”

“Well, I get my oil change to winter oil. Have you done that?” he asks.

“There’s a difference?” I say.

“What model of car do you drive?” my second male friend asks.

“I don’t know! I can’t even find my snow-scraper thing. What are those called?”

My male friends freaked me out. Apparently, I need WINTER TIRES, though I have been told my ALL-SEASON tires are fine. Apparently, there are different oils and fluids, but I just want to be able to see out of my car when I drive. I head to Canadian Tire, fighting back tears, and the crowds. (which makes me feel better. Apparently I’m not the only Canadian who “forgets” that snow always comes.)

1. I am now the proud owner of a 26-inch snowbrush/scraper. Apparently, according to the man in red I practically jumped to talk to, it’s good for “short people” because it’s long and it’s strong so it won’t snap. He says I don’t NEED two, but I explain that I NEED two. So I also leave with a Delux snow brush (I liked the red and it was light) to keep one in the car, and one in the house.

2. I asked him what else I needed. Unfortunately, this guy didn’t drive but told me a lot of people buy mats for their car. I leave with a mat set, which is good, because you do bring in a lot of snow into the cars. “It will save your carpets,” he tells me. Whatever. I’ll take them.

3. I leave also with a heavy bottle of anti-freeze to put into my car. (Now I just need to drag a guy friend over to put it in for me!)

4. I also left with some quiet ugly plastic mats, for the inside of my house. Better ugly for a few months, then dragging in wet snow through the house. (Is there anything worse than stepping in a pile of mush in your socks? NO!)

5. I plan to call my dealership to deal with an oil change/tire change. Who am I kidding? I don’t even know how to pop the thing up to see the engine. Let them deal with it. That’s what they’re there for.

Most importantly, I called my snow removal service to make sure my bill was all paid up. For a little extra-charge, they told me, they’ll sweep off my car as well. I hate to say it, but sometimes a single gal needs to through money at the problem. And this isn’t a small problem. THIS IS WINTER WE”RE TALKING ABOUT!