How to deal with a stolen wallet

Protect yourself from phony credit card charges and identity theft 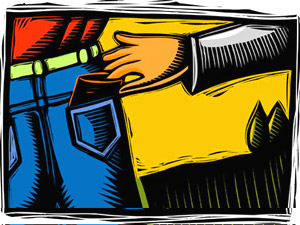 Busy moms had no idea. They rushed out of their vehicles to pick up their kids from the daycare centre (forgetting to lock the doors), and in the few minutes they were gone – a woman named Stacey Bogan snatched their left-behind wallets and purses. Using their swiped credit cards, personal cheques and driver’s licences, she assumed the identities of these moms and went on major shopping sprees. Before Bogan was caught, she reportedly stole the identities of at least 25 people.

The above case took place in 2004 in Charlotte, N.C., but identity theft is also a big problem in Canada. Barry Elliott, creator of the anti-fraud organization PhoneBusters and an O.P.P. Anti-Rackets officer, says at least 12,000 Canadians are victims of identity theft each year. The scary reality is that a stolen or lost wallet isn’t just about losing your cash. Your biggest fear should be identity theft, a nightmare in which an imposter can receive loans, new credit cards and even a mortgage, all in your name. Here’s a primer on what you can do to prevent someone from not only robbing you of your wallet, but of your identity in the process.

After Bogan snatched a wallet, she was ringing up credit-card purchases within 15 minutes. Time is crucial. When you discover your wallet is missing, the last thing you want to be doing is frantically searching for the phone numbers of the credit-card companies. That’s why you should keep photocopies of your credit cards and all other identification. (Be sure to copy both front and back.)

On the photocopy, write down the phone number for your local police. “The police won’t do much, but at least it’s on record in case the credit-card companies investigate the fraudulent purchases,” explains Stanley Kershman, an Ottawa-based bankruptcy lawyer and author of Put Your Debt on a Diet. Keep a photocopy safe in your home, and give one to a trusted friend or relative; you may be on vacation and unable to return home. Photocopies also make it easier to prove that you are, in fact, you when replacing your identification.

Don’t carry everything and the kitchen sink in your wallet

Most of us know this, yet financial guru Gail Vaz-Oxlade, host of the Life Network’s Til Debt Do Us Part, is amazed by how many people carry their Social Insurance Number (SIN), birth certificate and passport in their wallet or purse. Identity thieves use the information on these cards to apply for lines of credit and new credit cards using your name. “Never carry your cheque book with you either,” says Vaz-Oxlade. “Your cheque often has your bank account number on it, address, even telephone number – basically, everything they need to go about stealing who you are.”

If you insist on carrying cheques with you, consider replacing your address with a P.O. box number and even initializing your first name. (If your cheques end up in the wrong hands, this gives the thieves less information to use against you.)

Cancel your cards. All of them.

Most people remember to cancel their credit cards. But don’t neglect the other cards in your wallet. In the Charlotte, N.C., example, at least one woman cancelled her credit cards but thought nothing of reporting her AAA membership card stolen. It turned out that the thief used the card as I.D. to buy $1,500 in traveller’s cheques. The lesson: Don’t neglect to order a new CAA card, library card and even video membership card. “If someone uses your video card and rents out movies and video game equipment and doesn’t return it,” says Kershman, “the retailer will assume you have bought it and will charge the amount to your account.”

Cancelling your various credit cards and I.D. isn’t enough protection. Identity thieves can use your personal information to secure a new mortgage and a line of credit – and rack up charges without you ever suspecting a thing, since the perpetrator can also change the billing address. To help prevent this, place fraud alerts with all of Canada’s three credit-reporting agencies: Equifax (1/800/465-7166), TransUnion Canada (1/866/525-0262) and Experian Canada (416/593-7906 ext. 225).

“Put a red flag on your file,” says Barry Elliot. A fraud alert doesn’t prevent you from obtaining credit, but it does mean creditors will call the phone number you put on the alert to ensure it’s you seeking the credit. The credit-reporting agencies will also issue a free credit report to you every year – something you should be asking for anyway to guard against identity theft. Elliot suggests requesting a report from one of the three reporting agencies every four months. Or, he says, pay a firm such as Credit Alert a small monthly fee to continually monitor your credit report for changes. “A credit report,” says Elliott, “should be as important as checking your bank statement.”

Help is on the Web

The Canadian government operates two websites you should bookmark in case your wallet is lost or stolen.

Servicecanada.gc.ca: a brief guide outlining the steps you should take if your wallet is lost. The site includes a handy outline on the order in which you should go about replacing your identification. (For example, call your bank first, then yourlocal police, followed by your credit card companies.)

Safecanada.ca: A Q&A on everything identity theft (including stolen wallets), and what to do if you think you may be a victim.