How to break up with a friend

The phenomenon of gal pals dumping each other – without so much as an explanation – has finally got a name: icing. Why we do it – plus, how to know when it's time to call it quits 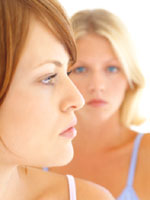 When famous friends Paris Hilton and Nicole Ritchie publicly parted ways last year, tabloids ate up the story with the same fervour reserved for a TomKat sighting. Sure, any celebrity feud is hot gossip, but this tale of a female friendship gone bad was particularly juicy. Why? Because we’ve all been there.

It’s a fact: virtually every woman has dumped a friend at some point. And even though most of us don’t have the details of our breakups splashed across the cover of a magazine, it’s still an incredibly unpleasant experience – for the dumper and the dumpee. After all, cutting ties with a friend is the ultimate betrayal – it’s mean, selfish and yet in some cases, completely necessary. Like it or not, some friendships aren’t worth saving.

“We have millions of guides telling us how to deal with toxic friends, but none of them tell you that it’s OK to do what’s right for you and simply end the friendship,” says Liz Pryor, the author of What Did I Do Wrong? When Women Don’t Tell Each Other the Friendship Is Over (Simon & Schuster), published in April.

“There’s a tremendous sense of shame and failure that comes with a failed friendship, and there really shouldn’t be,” she says. In her interviews with dozens of women, Pryor discovered that people have varying reasons for ending a friendship without warning or explanation, a phenomenon she aptly calls “icing.” As it turns out, it doesn’t always take a dramatic backstabbing or heinous betrayal for a woman to want to ditch a friend; in fact, the reasons can be as simple as “she’s bugging me” or “I’m bored” – and they’re all valid if they’re making your life miserable.

If you’re hanging on to a fizzling friendship, it may be time to end it. But instead of icing your friend, take the high road and tell her – tactfully – that it’s time to part ways. “Women stay in bad friendships too long all the time because they don’t know the difference between self-care and being self-centred. It’s in our nature to soothe people and avoid hurting them,” says Allison Wood, an Ottawa-based psychotherapist. “But sometimes you have to choose to let it go. It’s hard to do, but you’ll feel better in the long run.” Here are some warning signs that it’s over.

You’re bored to tears You know the scenario: the friendship is humming along and then suddenly you run out of things to say to each other. She doesn’t laugh at your jokes, her stories ramble on forever (was she always this long-winded?) and spending time together is beginning to feel as fun as watching an infomercial rerun. “Sometimes we go through changes, and we expect everyone else to change along with us. All of a sudden we begin to see our friend’s flaws,” says Wood.

That’s what happened to Paula Kim when she reunited with her hometown friends at a wedding in 2000. She quickly realized she had little in common with these so-called friends, who hadn’t changed much in the last 10 years. “It’s was a real eye-opener,” says Kim, a Toronto resident, who finally decided there was no point in hanging on to stale friendships. “It dawned on me that we weren’t really friends at all anymore, and that was fine by me.”

After the wedding, Kim and her friends took the non-confrontational route to ending the friendship, purposefully losing touch by letting birthdays and anniversaries pass by unacknowledged. The feeling was obviously mutual – her friends made no effort to contact her either. But had the breakup been one-sided, Wood says a more straightforward approach to avoid hard feelings or unanswered questions would have been the way to go.

“There may be some instances where you feel comfortable enough to tell your friend that you’re moving in different directions or that you feel unhappy with the friendship and have chosen to move on,” says Wood. “If so, be honest but firm about it, as hard as it may be.”

Remember, it’s all a part of personal growth – and nothing to feel guilty about. “Every once in a while you have to reassess the people in your life. Some people become closer to you, others move to the periphery,” she says. “People move on.”

You’ve got nothing left to give

It’s normal to be on the receiving end of the occasional bitch and moan session, but it’s not your job to be a personal therapist. Start paying attention to how you feel around your friend. Are you happy? Relaxed? Anxious? “If you’re feeling drained, beat up and worn down after seeing a friend, it’s a sign that something’s wrong,” Wood says.

Healthy friendships should leave you feeling energized and happy (most of the time) – never compromised. Take a good hard look at the friends in your life and what value they bring to it. Or, as Wood suggests, “Think of your friendship as a garden and ask yourself: who comes along to water the flowers and who comes along to pee on them?” From there, weed out the so-called friends accordingly.

AJ Vaid, a 29-year-old master’s student in Cambridge, Ont., knew she was in a one-sided friendship when a university friend asked her to write an exam on her behalf. Vaid refused, ending a long history of doling out unreturned favours and effectively terminating the friendship altogether.

“I always thought of her as a friend, but now I know that friendship isn’t about constantly giving in and feeling guilty about saying no,” Vaid says.

Vaid hasn’t spoken to her ex-friend since she closed her dorm-room door on her – but even then, it wasn’t so easy. “She stood out in the hallway for a while, shouting at me for being a useless friend before she finally left,” Vaid says.

In an extreme case like Vaid’s, it’s impossible to end the friendship with tact or grace; if this scenario sounds familiar, forget about saving face and save your sanity instead, Wood says.

“Some friends may be too difficult or defensive to talk to, and this may be the reason you’ve chosen to move on in the first place,” she says. “In this case, it’s maybe better to exit the friendship by distancing yourself as quickly as you can. They’ll likely take the hint eventually, but if they don’t back off, you may have to gently tell them the truth.”

In the meantime, treat the failed relationship as an opportunity to learn something, Wood suggests. “When you’ve had any kind of breakup, ask yourself what you’ll accept in the next friendship. What are your limits? Knowing these things will help you move away from the next bad friendship a lot faster,” she says.

You’re just not that into her anymore

She doesn’t forget your birthday. She’s never late for a dinner date. Your husband even likes her. Yet for some inexplicable reason, you don’t feel like hanging out anymore. It’s the typical “It’s not you, it’s me” scenario.

“Sometimes you can’t explain it – it’s just over,” says Pryor, who herself has been a dumper and dumpee. “You don’t always need a big fat reason to end a friendship. You have the right to do what’s right for you.”

Still, that’s no excuse to treat someone poorly. If you’re dumping a friend for reasons you can’t clearly explain, acknowledge the end of the friendship in a letter, being careful not to place blame or open it up to debate if your mind’s made up. “You’re not doing anyone any favours by ignoring the situation. Acknowledgement is imperative,” Pryor says.

Do you want more friends? Here’s how to make new friends easily.