How skinny is too skinny? When supermodels cross the line 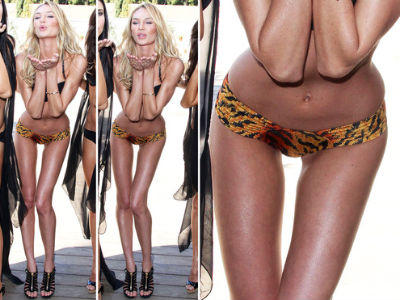 How skinny is too skinny? It’s an ill-defined line – dangerously ill defined in the fashion world – but one that model Candice Swanepoel apparently has crossed. Swanepoel made the mistake of leaning forward to blow a kiss at the camera while wearing a bikini at a recent Victoria Secret event, revealing the incredibly tininess of her legs and hips. The question is, can we really blame her for being so absurdly thin? Jezebel has posted some photos of Swanepoel in an earlier “curvy” phase next to the recent skinny ones, and she looks pretty much exactly the same. To reward thinness one day and then pronounce it scary the next seems a little unfair. Better that we were all alarmed by skeletal fashion models every day.

Well this is weird. Prince William and Kate Middleton have announced their choice of rings for the big day, and it turns out there’s only going to be one wedding band. That’s right, according to a palace spokeswoman, “There is only going to be one ring, in accordance with the couple’s wishes,” and that one ring is going to Kate. So why is William shunning tradition by going bare fingered? We have no idea, and the palace has yet to provide an explanation, so in the meantime, please, let your speculative imagination run wild.

A new study indicates that nurses and trained midwives could potentially perform medical abortions as safely as doctors in developing countries. Some 98 percent of unsafe abortions take place in these countries, and training nurses and midwives to safely perform these abortions could greatly reducing the chances of complications or death from an unsafe procedure.

As the nuclear crisis in Japan continues to unfold, worries have begun to grow about the safety of Japanese seafood being consumed in Canada. On this front, we need not worry: Canada has not imported any seafood from Japan since the earthquake and tsunami hit on March 11. What is still unknown is how radiation drifting across the Pacific Ocean may affect seafood, crops and livestock in British Columbia. Scientists say it will be at least another week before potential radiation will reach the West Coast, at which time any potential dangers can be evaluated.

India just released some of the numbers from their latest census, and the figures are staggering: the country’s population now sits at 1.21 billion people – that’s 17 percent of the global population. Over the past 10 years, the population of India has grown by 17.6 percent.