How I could use the kids of Howick now

Yesterday, I went to speak to the kids of Howick Elementary school, to talk to them about what it is to be in the military and why Remembrance Day is so important. They were so welcoming, kind, inquisitive and sweet-natured. Today, in the aftermath of losing Duncan, I wish I could be surrounded by them again. 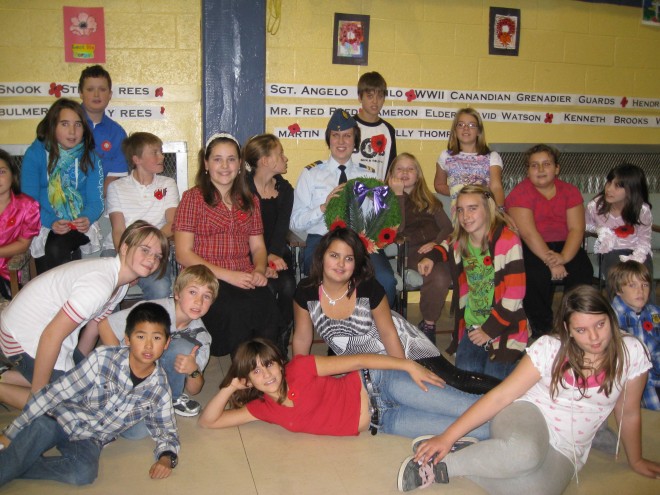 Howick is a tiny little town. I’m not sure of the population but I’m sure it’s hardly a blip on the radar. But my Grandma graduated from Howick Elementary and since my Grandpa was buried up the road, I contacted the Elementary school there to ask them if they would mind if I was a part of their Remembrance Day service. They were excited to have me and I was excited to be there.

I had a lot of friends warn me, who had also spoken at a school during Remembrance Day, that it was a disappointing experience. “They didn’t want to listen to me,” one had said. “They were rude,” said another. But I still went.

I walked into the gym with all the Legionnaires and the kids all gasped (only 93 of them!) when they saw my uniform. I spoke to them about how Remembrance Day isn’t just about remembering those who have died but also a time to think of everyone who has ever served, because they’ve all given up something. They’ve all made a sacrifice. The kids, aged 4-12, sat quietly the entire time, patiently listening and looking at me with awe. Afterwards, they were allowed to ask questions and they certainly did. They wanted to know everything. What did I eat? When did I go to sleep every day? Did I shoot any guns? Did I have to exercise lots?

Around the gym, were names of all the soldiers who had served in the military and lived in Howick at one point. When we took this photo, I sat in front of my Grandfather’s name and my name. Once seated, the kids came up one by one and gave me and the Legionnaires hand made poppies with their photos in the centre and little tags that read, “Je Me Souviens”. Afterwards, they wanted to ask me more questions, shake my hand, try on my hat, and take photos with me. I shook hands with each and every one of them because they were all special.

Being in a military family, I have had a lot of touching Remembrance Days. But yesterday, with the children of Howick, I never felt such a feeling of belonging. As I left, I was speaking to the principal of the school and we were talking about being an army brat, how you never really have a place that is home. He said, “You have roots here. You always have a home in Howick.” I walked away really feeling like I did.

I’m sitting here now, unable to clean up Duncan’s bones and his snot from my window, and I wish I was surrounded by the Howick school kids again. There’s something in children that is so similar to a dog. It’s a mixture of innocence and a lack of taint from the things that are sad in the world. That innocence is intoxicating and when surrounded by it, I felt at ease. Today, without the kids and without Duncan, I feel so lost and more homeless than ever.

Thank you, to the children of Howick Elementary school. Never lose your inquisitive nature. Never stop asking the questions that matter in life and being brave enough to stand up and ask those questions. You made my Remembrance Day so very special. And even though I came home only to lose Duncan, I can still look back on yesterday and smile because I was surrounded by so much joy, even for such a short period of time. Both the kids and Duncan did that for me.