How an e-book can hide your romance novel obsession

E-books are a brown paper bag for romance novels; questions about the safety of lap-held babies on flights; Kate Gosselin and Sarah Palin, together at last; Statistics Canada reports an increase in doctors and nurses; and the controversial publication ban on Tori Stafford's murder in lifted. 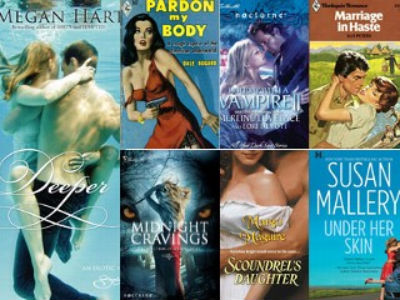 As e-readers become more mainstream and popular, book-sellers say one surprise genre is now the fastest growing segment in the e-book market: romance novels. An article in the New York Times likens the e-reader to a brown paper bag – it discreetly conceals the sexy nature of your reading material. The more that 75 million people that read a romance novel each year can now enjoy their bodice-ripping tales free from the judgmental stares of subway onlookers.

It’s been a hot-button issue in the past, but it’s been a while since we’ve heard about baby safety on planes. The topic is back in the headlines now though, as the National Transportation Safety Board (NTSB) will meet yesterday to discuss changing the law that allows children under the age of two to sit in the lap of a parent, as opposed to being buckled into their own seat. The NTSB is unhappy with the law, and one expert warned that, “Adults are mistaken if they think they will be able to hold an infant in severe turbulence or a plane crash.”

What happens when the queen of absurd reality television meets her equally ridiculous match? Camping trip! TLC brought together their two leading ladies, Kate Gosselin of John and Kate Plus Eight and Sarah Palin on this week’s episode of Sarah Palin’s Alaska.  The episode features the now single Gosselin and her brood trying their hand at camping with Sarah and her family. While the Palins and Gosselin’s kids have a great time, Kate loses it over a lack of cutlery and hand sanitizer a couple of hours in and decided to call it quits. So much for roughing it.

The doctor is in! And so is the nurse, apparently. New data from Statistics Canada has found that Canada’s supply of nurses has grown at a faster rate than the population. While this is good news, officials warn that the number of nurses per capita has still not returned to the levels that existed before the health-care budget cuts of the 1990s. The numbers also indicate that Canada now has more doctors per capita than ever before.

The disturbing details behind the 2009 abduction of eight-year-old Tori Stafford have been released, after a controversial publication ban was lifted. The media is now allowed to reveal much of what happened during Stafford’s abduction from the small town of Woodstock, Ontario. The proceedings of the trial of her murderer, then 18-year-old Terri-Lynne McClintic, have also been made public. The release of these details reminds us of the very public nature of the Colonel Williams trial, which we discussed with you here. Is it important that this information be made public, or does it unnecessarily pain the loved ones of the victim?