Holiday parties make me so nervous!

It’s that time of year where I find myself totally stressed out. Not because I have to buy Christmas gifts (perk of being Jewish!), but because of the holiday invitations and parties. 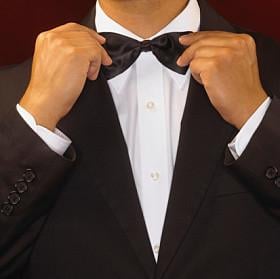 It’s that time of year where I find myself totally stressed out. Not because I have to buy Christmas gifts (perk of being Jewish!), but because of the holiday invitations and parties.

Parties are supposed to be fun, right? It’s nice to be invited to parties, right? So how come invites and parties bring me so much angst and anxiety? Perhaps it’s because I work at home and have for almost a decade. Over the years, I’ve gotten so used to being solitary, I think I have lost some of my social skills, like, um, how to talk to people.

The other night I was invited to a FABULOUS party, hosted by Absolut Vodka, in honor of Canada’s best, and possibly only, paparazzi photographer, George Pimentel.

Immediately after receiving the invitation – an invite supposedly others were dying to get – I felt anxious. The party took place between 7 and 9 p.m. and the dress code on the invite said “Black Tie.”

Black tie confuses me. Black tie means formal, right? I much prefer “cocktail chic,” because black tie sounds so serious. So I worried about what I should wear. Because I don’t own any gowns, and didn’t want to spend money on something I’d only be wearing for two hours, I decided on a little black dress. I worried if I would be dressed up enough.

Then I worried about my date. Did he have to wear a tuxedo? Would others be wearing tuxedos? Did he own a tuxedo?

Then, as the party day arrived, I worried about who exactly was going to be there. Would I know a lot of people? Would I know nobody?

And, to be honest, there were people I worried would be at the party that I didn’t particularly want to see or wanted to talk to. (Come on, be honest, you’ve been in the same position.)

Basically, I’ve come to the conclusion that I’m just bad at parties. So how do I make myself more comfortable, and not feel angst every time I’m invited to a party? Since it is holiday time, there will be a lot of parties. The very thought of having to worry what to wear, who I’ll see, if I’ll be comfortable, how long I have to talk to people without seeming rude, if I should bring a guest, all makes me want to just take a long bath and hold my breath under water.

But I can’t be a hermit. And I want to enjoy going to parties So, I asked Kim Izzo, the co-author of The Fabulous Girls Guide to Etiquette, and the deputy editor of Zoomer magazine, her thoughts. She is also working on a book, with a working title, “The Social Rules.” Most importantly, she attends a lot of parties. And she looks forward to them! There was no one better to ask about party angst than her.

1. When it comes to invites with black tie, she too prefers “cocktail chic.” But, she says, thanks to celebrities showing up on red carpets, sometimes in jeans, black tie no longer means having to wear a tuxedo or gown. “Formal no longer means formal in the old sense of the word. Women, especially, can get away with cocktail dresses, no matter what the dress code is. (Interesting fact, she mentions that George Clooney has only owned one tuxedo in 12 years!)

2. There’s nothing wrong she says, at parties, to keep conversations short. “It’s not a dinner party. You’re supposed to move about. Holiday parties are about mingling.” It’s even all right to say, “I’m going to go mingle,” if you want to get out of a conversation.

3. Bringing a plus one (if allowed) is a good thing especially for people who are shy. “They’ll provide you with a comfort zone. Especially bring someone who is more outgoing than you.”

5. A lot of people, she says, do have before party angst and that I’m not alone, especially if it’s a party where you may not know who’s going or if you’ll know anyone there. “Mostly, I’m excited to go to parties,” she says. “They’re supposed to be fun.

6. Lastly, she says, you should never be the last one to leave. In fact, you should leave at the height of having fun, so you can remember having a fantastic time.

Thanks to Kim Izzo, and her advice, feel free to now invite me to your holiday parties. I need the practice and am feeling a lot more cheerful about parties. Do you feel party angst? Share!