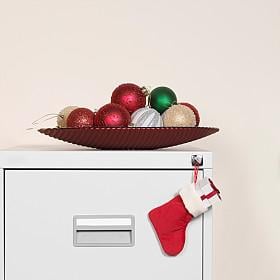 Oh, the office holiday party. While room-temperature canapés, room temperature eggnog and sparkly shirts surround you, so do potential colleague snafus and faux pas. Not sure how to handle a drunken come on from Ted in sales? What do you do if you catch your co-worker Tammy in a tête-à-tête with your boss? We asked Karen Brunger, the Woodbridge, Ont.-based founder of the International Image Institute on how to delicately handle some holiday party politics.

The Scene:  Oops…that free pinot went down a little too well and now you’re a little stumbly and giggly.
Help! If there’s food or coffee nearby, grab either (if not both) first to dull the effects of the wine in your system. “Then get yourself into a private washroom or an office with a closed door, look into a mirror, make eye contact and say ‘I am in control.’,” says Brunger. “Say that quite a few times—I am in control and feel what it’s like to be there. And it is actually a way to move through signs of intoxication the fastest.” And if you think you’ve had a slip of the tongue in front of colleagues or a boss, go out and immediately and discreetly apologize.
Avoid it next time: “Know your limit of how much you can drink and then drink under that limit,” says Brunger. “What’s generally accepted are two glasses of wine or one or two cocktails and leave it there. And absolutely make sure you’re having food.”

The Scene: That Ted…ick…he’s slobbering all over you and is he actually coming on to you?
Help! “Be polite because it is a colleague and someone you have to work with,” says Brunger. And you can excuse it with a simple “I appreciate the interest but I’m not interested.” If they’ve had a few drinks, that might even help you out. “Maybe even make a joke out of it if they’re intoxicated because they might not have done that when they were sober. And the joke helps them save face when they are sober,” she says.
Avoid it next time: If you’ve had an idea that Ted’s been scoping you out around the office, then avoid him at the party…and in this case, for the rest of the night.

The Scene: You wander out of the washroom and catch team member Tammy and your boss in a, er, private moment.
Help! “Back away,” instructs Brunger. “Pretend you never saw it and don’t mention it to one single person. You don’t want to start spreading gossip and they’re not your responsibility. Because if rumours start flying it’ll create a very unpleasant work environment.”
And if it’s someone like Tammy, who works directly with you and you both report to said boss, then wait to see how it pans out. “Who knows—it might become a long-lasting relationship,” says Brunger. “Meanwhile just wait and be your regular team player self and hopefully nothing needs to be done about it.”
Avoid it next time: Unfortunately there’s not much you can do about this one besides wearing permanent blinders.

The Scene: You’re stuck in a corner talking to your boss. Or annoying Aaron from Accounting.
Help! “Smile and be polite and listen to them for whatever length of time you’re comfortable doing that,” says Brunger. “And then excuse yourself saying ‘I’m really having a great time talking to you but there are so many other people we need to mingle with, but this has been really nice. So let’s go mingle now/talk to Tammy/grab an appetizer.” Or draw someone else into your conversation and get them involved and then leave with an “I’ll let the two of you continue” line.”
Avoid it next time: Stick to populated areas of the party, such as near the bar so you don’t find yourself cornered in a corner.