The four-time Olympic gold medallist talks about her incomparable career and what she'll miss most about the game she loves. 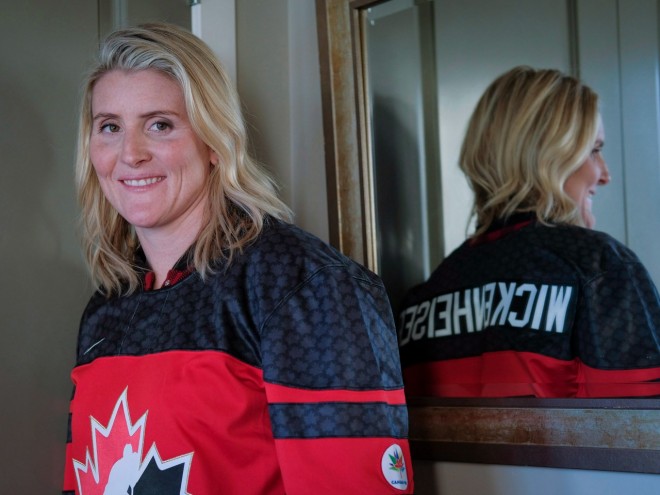 You’re one of the best players in the world. Why retire?
It came down to timing. I’d been thinking about it, and the opportunity to go to medical school is one I didn’t really want to pass up. It felt like the right time. I guess there’s no right, right time. But for me, I felt like it was. So here I am.

How difficult has this decision been? Because you could’ve gone the Jagr route and done a couple more Olympic cycles.
[Laughs.] It’s a difficult decision for sure when you decide to move on. But for me I look at it as I’m really grateful for everything I had in the game. I think as women on the national team, you start [your hockey career] and you also are starting to plan what you’re going to do when it’s over, because we don’t make the millions of dollars and you have to have a life after. There were things in my life I just really didn’t want to wait for anymore. My son, Noah, was very happy when I told him I was going to retire. He was supportive either way, but there was a little bit of relief there that mom was probably going to be gone less. It’s very emotional, because it’s something you’ve loved your whole life.

Olympian Christine Sinclair on how to be a good leader

You’ve been named to the Order of Canada, played Olympic softball, won countless world championships, won four Olympic gold medals. You played pro men’s hockey and pro women’s hockey, and went to an NHL rookie camp. How do you even reflect on a career like that?
Yeah, I think I’ve done a lot in my life and the game for me has been very diverse. The one thing I’d always wanted to do in my career is push myself out of my comfort zone — I think I’m really comfortable with being uncomfortable. So that’s why I played pro men’s hockey, that’s why I played softball and hockey at the same time, that’s why I’m not afraid to speak up — that’s just who I am. I’ve always had to prove myself from the time I was a little girl growing up playing hockey in Shaunavon, [Sask.]. It’s just been part of the fabric that you get — whether you ask for it or not — when you’re the first in a lot of things. But I wouldn’t trade it. It’s been good.

Was playing pro men’s hockey in Europe the biggest risk you took in your career?
It would be fair to say that. To go over to an unknown, into an environment where you were not necessarily welcomed with open arms. I’m proud that when I played there, I was able to average half a point a game. I remember the first practice, 100 media from around the world were lined up around the rink to watch. You’re just like, “Wow, they’re here not because they’re excited to see me play, it’s because they think I can’t skate.”

Seriously?
I think so, yeah. I remember when I stepped on the ice, a collective gasp came from the rink because, “Wow, she actually looks like she can play here.” My coach at the time told the biggest defenceman on the team, “Chase her around and make sure you hit her at every opportunity, because she needs to show everyone that she can handle it and play.” And I needed to know that. 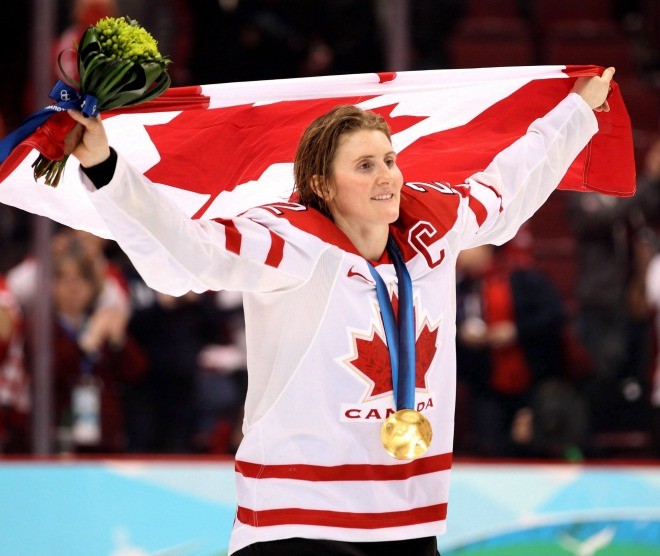 Wickenheiser celebrates after defeating the USA in the final at the 2010 Vancouver Olympics. (Jonathan Hayward / The Canadian Press)

You were 15 when you first made Team Canada. What do you remember about walking into that dressing room for the first time?
I was really nervous, but I was lucky because I had these amazing women who were just so grateful and happy to have a national team to play on that they just took me under their wing. Angela James said, “Ok rook, just make sure you get me the puck.” France Saint-Louis with her passion. These players were seizing the opportunity and they were all women that had real jobs and real lives, and then they were playing hockey. They worked their butts off and I learned that at a young age.

You’ve been part of so many incredible games. Does the Olympic gold medal final in Sochi take the cake? [Team USA led 2-0 with just a few minutes left in the third period. Canada came back and won in OT].
The most emotional victory was probably Salt Lake [Canada beat the Americans in the gold medal game after losing eight straight to Team USA leading up to the Olympics]. The craziest game was probably Sochi.

You played on a broken foot in Sochi, too. How?
I had a lot of injections. [Laughs.] It was OK in my skate, it was just everything else; running, even walking, was not fun. For some reason, in my skate it was bearable. It led to a surgery or two after.

At what point in your career did you feel like you were the best in the world?
Honestly, I believe that you are only as good as your last game. And so there were games and tournaments and days when I was like, “I’m probably the best player in the world.” And there were some where I’m like, “Oh god, I’m terrible.” I think that pushed me all the time. I wanted to dominate in the game. Probably the thing I’m most proud of is if I look back to the gold medal games in all the Olympics, I don’t think I played a bad game in those five games. I rose to the occasion a lot, and I’m proud of that. That’s probably the thing that’s purely hockey that I’m most proud of.

Did you feel like you were the best in the world after you won gold in 2002?
I felt like we were on top of the world. I felt pretty darn good. All I cared about is that we won. Losing in Nagano [in 1998 at the Olympics], I remember watching the Americans celebrate and thinking, “I’m not going to cry and I never want to feel this way again.”

Did you cry?
No, I didn’t. But I went into almost an Olympic hangover depression for about a year after. My coach at the time, Wally Kozak, he gave me a quote that said: “A gold medal is a wonderful thing, but if you’re not enough without it, you’ll never be enough with it.” I had no perspective because everything I thought I was, was wrapped up with who I was as a hockey player. I’ve kept this quote in my wallet. I’ve put it up in my stall at every Olympics, at every world championships since. It serves to remind me that it’s just a game, which is easy to say but harder to do in the moment. 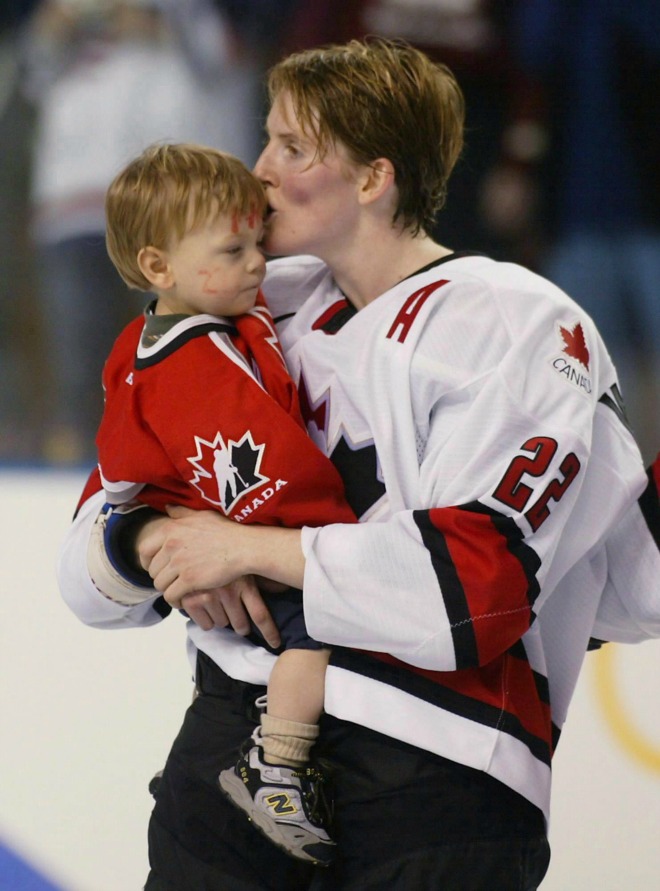 Wickenheiser kisses her son Noah Pachina following Canada’s 3-2 victory against the USA at the 2002 Olympics. (Tom Hanson / The Canadian Press)

Your timing was great in that you got to play in the first Olympics to include women’s hockey. But do you ever think about what your career might look like if you were 10 years old now?
I came at a great time. Now the young girls coming in are at a great time. There’s going to continue to be great times, I think. It’s exciting, it’s the way it should evolve. I had a lot of opportunities, and a lot of opportunities to be the first at things, to push the game and challenge and demand that people give it the respect it deserves.

What do you want people to think of when they think of your career and what you’ve done for the game?
It’s a tough question to answer, I guess. What I’d want people to think about is that I truly love the game. I loved to play for Canada and represent the country, and I hope that my impact makes it easier for little girls now to play the game. And that they’ll have a chance to love it the way I did.

It made you think of your age?
It’s flattering, but yeah, when they’re calling you a legend, you know that you’ve been around a long time.

You did break in at 15…
I did. I’m a legend in my own way. [Laughs.] As many of my teammates would attest to. It’s flattering, it’s a nice compliment.

Even practice?
Yeah, I’ll miss practicing, I’ll miss training, I’ll miss playing. I’ll miss being in that competitive environment. Of course I’ll miss all the people and my teammates that came along with that. But just the game.

What won’t you miss? Probably some pesky American players you won’t have to battle again.
No, I’ll miss them too, actually. Because we make each other what the game is, those competitive, fuelled, fired moments. I’ll miss every one of those, and I’ll miss every one of those players, too. But I won’t miss being away from my son to travel. I won’t miss some of the BS that goes along with the game and the politics of it. I won’t miss schlepping bags and equipment through the airports, not having an equipment trainer with club teams.

Did you ever have the hockey bag with wheels?
No! We can’t have that stuff.

You’re a purist. What’s your dream line, made up of people you’ve played with at any time in your career? You’re the centre.
Ah, geez. I’d have [Wayne] Gretzky and [Danielle] Goyette up front. I’d put [Mark] Messier on D with [Geraldine] Heaney. And then I’d have [Shannon] Szabados in net.

Solid line. Is there anything you wish you’d accomplished in your career, but didn’t?
Ah… [Wickenheiser shakes her head no].

That’s satisfying.
Yeah. The only thing I would have loved is to be around to play true professional women’s hockey, where you’re really paid and it’s really legitimate. That’s the one thing I wish would have happened in my playing days. Other than that, no.

That was more than one.
I know. Let’s just say winning a gold medal in Canada, in Vancouver.

Will you still be playing hockey now that you’re retired? Shinny, pickup, beer league?
That’s a good question. Damn. I say no.

Not even shinny?
Oh, I’m sure I’ll play some shinny on an outdoor rink. Not for a while. I think I’ll get away from the ice for a little bit.

That’s fair. Any chance you’ll reconsider and make a comeback?
[Laughs.] Probably not.

Probably? So the door is open.
You never close the door, but probably not. How about a no? [Laughs.]

More:
Her Heart Will Dijon: Céline Dion’s ties to Montreal smoked meat
How to stay motivated to work out in winter
I’m sucking it up and running this winter — here’s how you can too