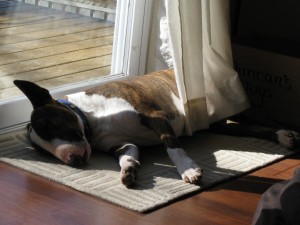 Perhaps this is a strange title for a post, however, today it feels very appropriate. It was three years ago today that Duncan came into my life kicking, screaming, and chewing…everything. Below is a photo of my little (okay…he’s 65 pounds) man laying in the sun….his usual post. The adventure began when my best friends bought Duncan for me, worried that I was lonely and in need of the company. I’m not going to lie…initially, I was not a happy camper about the whole idea of dog ownership. Correction…I liked the IDEA but not the actual application of said idea. This was just months before Ben came into the picture but somehow, I couldn’t see a dog being a plausible addition to my life as a single woman in the military. But then I went to him, knelt to the ground, and Duncan came right up to me, standing on my thigh to nuzzle my neck, his brindle coarse hair rubbing up against my cheek like sandpaper. That was it. I was hooked. I brought Duncan into his new home and realized I would have to teach him everything. At 5 1/2 months, he had not even learned how to use stairs and was not housebroken (this fact was announced unceremoniously when he climbed onto a pile of laundry I was about to do and pooped, letting the turd roll all the way down until it reached my feet. Glorious.). So it was my mission to give Duncan a great life, full of love and fun. I don’t know if Duncan was not on with my gameplan of fun, or perhaps he just has an alternate definition of the word, however, our first 6 months together were hardly survived by both parties. To give you an idea of some of the horrors I managed to withstand, I came home to my entire (and brand new) kitchen floor having been torn up and half of it had been eaten. Great. He also ate my couch, the carpet on my stairs, his own bed, and two remotes. He even decided to take it one step further one day and knocked me over, pulled off my pyjama pants and ate them right in front of me. This dog was making my life hell. There came a breaking point one night where I cried for about an hour in the middle of the kitchen floor (which at this point, had been replaced with a much heartier tile). Duncan came up to me, put his head on my shoulder and watched me. I held his soft little cheeks in my hands, made sure he was watching the tears in my eyes and said, “Buddy, come on. Give me a break. I cannot do it anymore.” He winked at me, which was more of a reflex than a response, then walked off to bed without disturbing me for the rest of the evening. From then on in, it was a different dog. He didn’t chew anything else, although his penchant for pens still remains. He did not destroy any more beds, became manageable for me to walk and no longer leapt all over anyone who came in the house. Duncan finally became the dog I needed him to be before I ran out of sanity. Somehow, I think he knew. Now, with Ben gone, I find I cannot live without my dog. We all know the healing powers our pets provide and Duncan truly brings his A-game to the table when it comes to consoling me. When I’m sad, he does something silly. When I’m angry or stressed and working from home, he gently comes up and tugs the end of my paper, reminding me I should be loving my dog instead of my work. Life is too short and we should all live our lives the same way as our pets, loving to the most ridiculous and loyal extreme. Duncan has taught me that it is the little things in life that are important. Lately, I’ve allowed myself to be a little too mopey, not taking pleasure in those little daily delights. But then I come home, see Duncan wagging his tail with the exact same amount of enthusiasm as the day before, and I remember all over again. So Happy Anniversary Duncan. Thanks for making me laugh. And for heaven’s sake, thanks for not eating my new couch. Kelly