Half the world menstruates — why are we such prudes about it?

When Instagram removed a period selfie, it underlined just how squeamish we are about That Time of The Month. We need to grow up — our health depends on it. 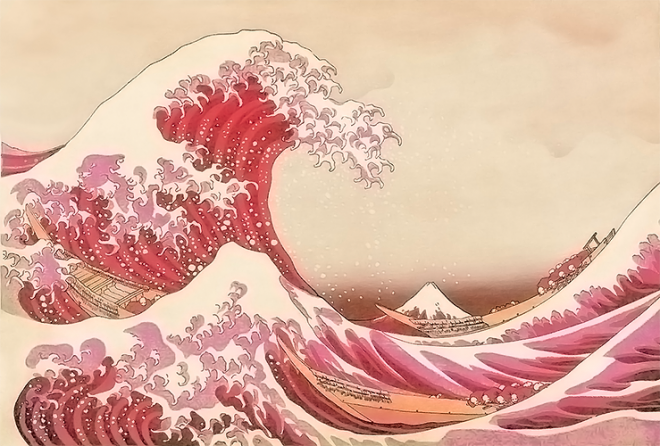 The Great Wave off Kanagawa, Hokusai.

Last week, Toronto artist Rupi Kaur posted a self-portrait to Instagram. She was lying in bed with her back to the camera, and on the crotch of her pants and on the sheet beneath her were two small spots of blood. Anyone who has ever had a period has had a leak situation — and any man or child who has shared space with a woman has likely come across a stained sheet in the hamper or tampon wrapper in the garbage. Menstruating is what half of the world does, about every four weeks, over the course of a few decades. No big deal, right?

Turns out that Kaur’s photo was a big deal for Instagram, which removed the image twice “for violating community guidelines” before reposting it and apologizing. In her public response, Kaur called out the general disgust that surrounds menstruation. “A majority of people, societies and communities shun this natural process,” she wrote. “Some are more comfortable with the pornification of women, the sexualization of women, the violence and degradation of women than this.”

She’s right. For better and for worse, we are utterly desensitized to sexual images of women, but we haven’t desensitized ourselves to the very natural reality of our periods. And when we don’t talk about them —because we feel embarrassed of our bodies and what they do — we are avoiding real and urgent discussions about their impact on our health, performance and lives.

While most women find their periods at worst an annoyance, there are some who are regularly debilitated by cramps, mood swings and severe bleeding. Some of these acute symptoms can indicate other medical issues, like endometriosis or uterine fibroids. And even without a health condition, every once in a while, we are hit by a really miserable cycle. Yet it can feel mortifying to share this with a boss, a colleague, or teacher, and difficult to justify paying attention to our discomfort and pain. 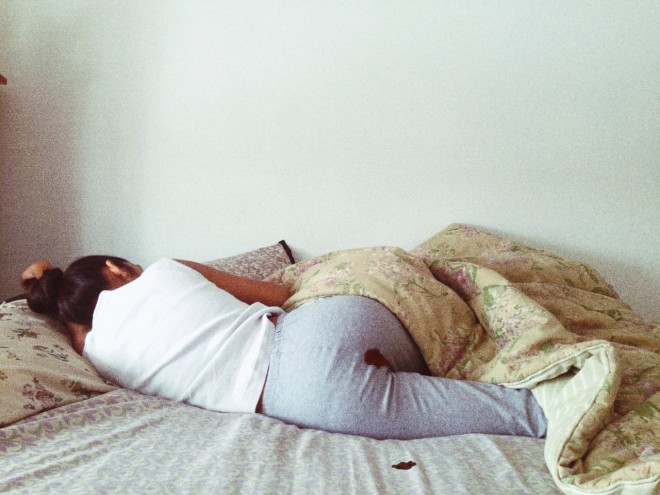 If you do speak up, you still might not be taken seriously. A few years ago, I went to my doctor with concerns about heavy bleeding and cramping during my period. He said that I was overstating my symptoms, but then tests revealed that my blood loss had made me so anaemic I needed a transfusion. My treatment was straightforward and successful, but if I hadn’t pushed my doctor, I would still be suffering.

One of the other big fears about advocating for self-care related your period is that it plays into dumb and damaging stereotypes about female frailty and how “crazy” we ladies get when we’re “on the rag.” In countries that have menstrual leave policies for employees, for instance, these attitudes create a double bind: women get time off work, but they can be perceived as feeble and over-sensitive for taking it.

Where’s the reasonable middle ground? We’re unable to acknowledge that periods (not to mention childbirth and menopause) might sometimes require accommodation without also assuming that women are therefore weak and incapable. We are able to do this though with other non-gendered health issues: we allow that colds, or sports injuries, or a bad bout of insomnia might slow us down from time to time. So the fact that we find it harder to accommodate our periods suggests a collective dismissiveness of health concerns when they only affect women. As the national No Tax on Tampons campaign points out, we also take an unfair and discriminatory financial hit each cycle. According to the group’s estimates, the federal government pockets $36 million each year in taxes on menstrual products.

Nearly 30 years ago, Gloria Steinem wrote a satirical essay called “If Men Could Menstruate,” which illustrated this point perfectly. She imagined a world where “sanitary supplies would be federally funded and free,” “medical schools would limit women’s entry (they might faint at the sight of blood)” and “statistical surveys would show that men did better in sports and won more Olympic medals during their periods.” Then, a few years back, Sarah Silverman updated the joke, tweeting, “It would be pretty cool if guys had to worry about period stains.”

Cool, for sure. And you can bet some of those guys would even be posting them on Instagram.

Let’s get real about penis size