'Look At What We Can Do Together': Habitat For Humanity CEO Ene Underwood On The Power Of Women Building Homes for Women 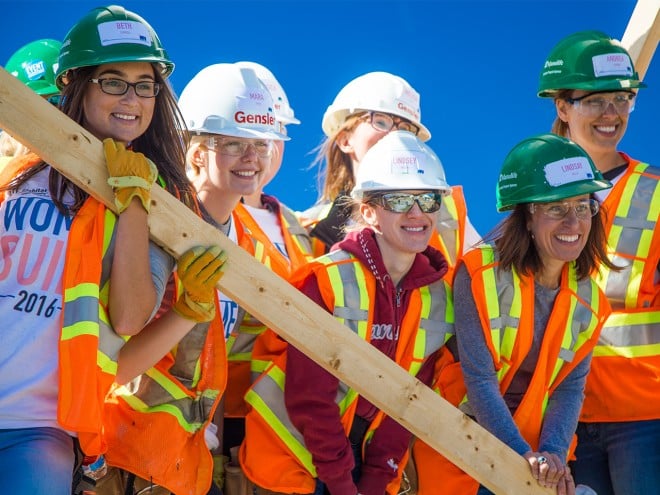 Presented by Habitat for Humanity

According to the Canadian Women’s Foundation, over 1.5 million women in Canada are living in poverty, in large part due to the systemic barriers that still prevent women from maintaining financial stability. Women represent a disproportionate number of the population’s poor, with female minorities and single mothers being the most vulnerable to low income.

Through the Women Build initiative, Habitat for Humanity is working to empower women to facilitate home-ownership and fresh starts for families in need, particularly single mothers. We spoke to Ene Underwood, CEO of Habitat for Humanity Greater Toronto Area, on how investing in safe, affordable housing and financial stability for women can help break the cycle of poverty.

How exactly does Habitat for Humanity work?

We facilitate volunteers to help working low-income families realize the strength, stability and financial independence of affordable home ownership. To do that, we build the homes and make ownership possible by acting as the mortgage holders. We oversee over 260 mortgages at any given time, and those mortgage payments help us build more homes.

Because we are a partnership model, we make ownership work by removing unaffordable down payments, and allowing families to instead provide 500 volunteer hours to build homes and work in our ReStore locations. These families are now paying $1.3 million in property taxes to help make all our municipalities stronger.

Tell us about your role at Habitat.

I oversee a zone that serves 12 percent of all Canadians. The work includes finding the land, building homes, fundraising, overseeing our 10 ReStore retail supply outlets [which sell home furnishings and appliances, and help provide funds for homebuilding projects], finding the families, helping them prepare for the home-ownership process and managing their mortgages. By the end of this year we will have served 360 families in the GTA who are now homeowners through Habitat.

How did you get your start in the organization?

I started off in business and then spent most of my career in health care. I honestly feel like my entire work and lived experience was preparing me for this. I grew up on a farm in Southwestern Ontario in a small rural community. I was the youngest of five children and, when I was little, my parents were struggling to keep the farm together. Our barn burned down when I was four, and it was extended families and neighbours helping us rebuild that really made the difference and enabled my parents to maintain the farm and have five children that went off to university. I feel that with Habitat for Humanity, it’s all coming full circle. I get to mobilize people to say, “We’ve all been helped at various time in our lives, now how can we help others in our community?”

Who is most affected by poverty in Canada?

The reality is women and children are indeed disproportionately represented in who is poor. Single mothers are more susceptible, with 21 percent of these families being poor. Being a visible minority, an immigrant, or Indigenous, and being a woman, all increases the likelihood of poverty. Being a woman and having a disability or being a senior citizen increases the likelihood of poverty. There’s an interplay between multiple factors that results in this lower income.

So what are the root causes contributing to this disparity?

The first part is that women still statistically have a lower income, making 74 cents for every dollar men make on average. In 2011, the median income for female-led lone income families with children under six was $21,200, which is about half of the income for single-parent, male-led families.

Part of it is also the higher proportion of unpaid work women do. There’s a greater likelihood that women will play the role of caregiver to children and aging parents, which reduces their capacity to upgrade their education and move away from casual, low-income employment. And then, if you’re a woman and an immigrant, or visible minority, or have a disability, there’s that double-layered element of discrimination. I think that plays less of a role in our workplace now than in the past, but you can trot out thousands of examples where it’s still in play.

What are the consequences of home ownership–challenges for women in particular?

[The cost of] housing, especially in large urban areas, further exacerbates the probability of poverty. In Toronto, $2,000 is now the average for a rental unit, and there’s well over 100,000 households on the waitlist for affordable housing. For many women, rent can consume over 65 percent of their income, leaving nothing for the things they need to keep themselves and their children healthy or enable them to upgrade their education. This creates a vicious circle where people end up in poor housing, and poor housing leads to poor health and lower self-confidence, all of which holds women back from moving past poverty. We see it all the time: 30–37 percent of Habitat homeowners are single-parent, women-led families, many living in conditions of crowding, with six or seven people in a two-bedroom apartment that is making them ill. I routinely hear families we work with talk about how “our home is holding us back.” 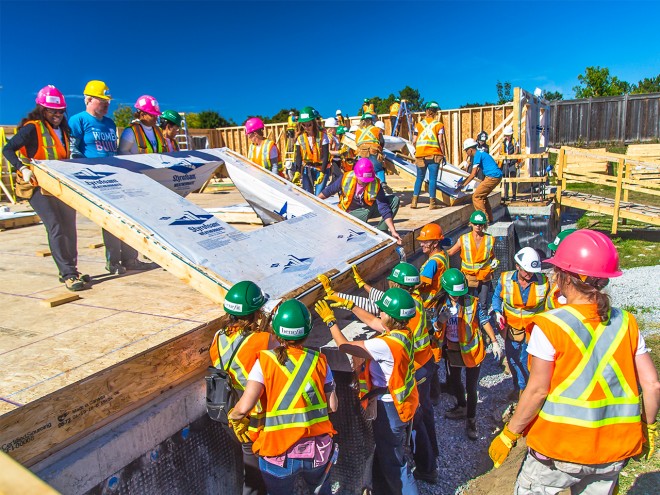 How does investing in women help break the cycle of poverty?

It all comes back to kids. If a mom is poor, her children are poor, and then their health tends to be poorer than average, their educational outcomes will be poorer, and so will their confidence and social networks. It creates a terrible cycle of poverty. But helping moms realize stability and financial independence creates a ripple effect to the children. Thinking of this as an investment in women is a really good way to think of that ripple effect. Having safe, decent, affordable housing is a key enabler for women to realize their full potential.

How does the Women Build initiative empower women to affect change?

Women Build is a two-week period that has been around in North America for over 25 years, and in the GTA since 2009. In that time we’ve rallied thousands of women, raised nearly $4 million and helped build homes for over 85 families. Each volunteer spends one day building with other women and commits to fundraising a minimum of $500.

From my own experience as a woman, this is a tremendously energizing experience that stays with you for years to come. There’s an intangible camaraderie that occurs when women are working side by side. Look at what we can do together… it’s a powerful thing.