A No B.S. Guide To Summer, With The Stars Of Baroness Von Sketch Show

Forget “beauty dust” or whatever other wellness ritual Gwyneth Paltrow is on about. When it comes to taking a little me time this summer, the women of Baroness Von Sketch Show advocate for some quality time with your chin hair.

“I love to sit down in front of my super-close-up mirrors and go to town,” says Carolyn Taylor, one of the four creators and stars of the hit CBC sketch series. Fellow Baroness Jennifer Whalen shares the passion: “I’d like to get a nice pair of tweezers and hang them around my neck at all times.” It should be no surprise then that the subject of female whiskers has already found its way into the series three times — or, put another way, thrice as often as in any other show in recent history. 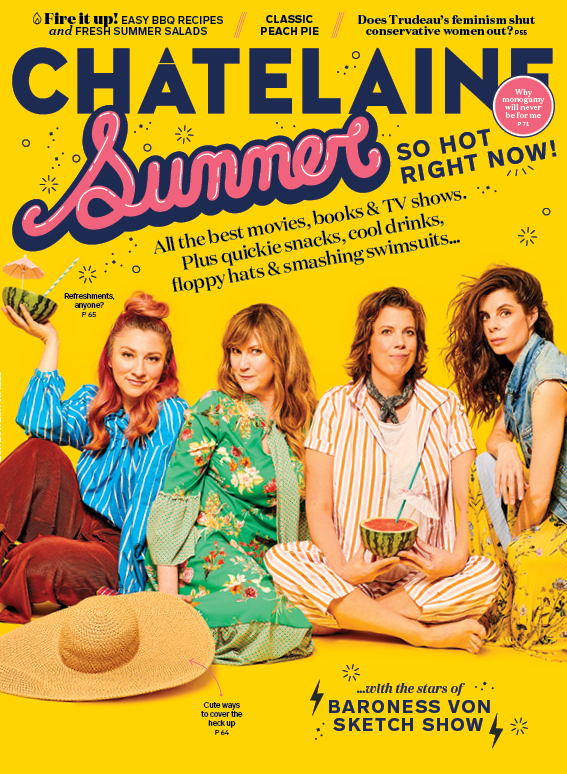 Exposing the often awkward realities of female existence is what Taylor, Whalen, Aurora Browne and Meredith MacNeill do best. It’s why Vogue magazine crowned the Baronesses “the best thing to come out of Canada since Ryan Gosling” when their show started airing in the U.S. on the IFC network last year. Another wildly complementary piece in New York magazine’s the Cut called the show Canada’s answer to Amy Schumer — only better.

So when we set out to create a summer guide to upend the traditional “get beach-body ready!” vibe and focus of many lifestyle magazines, they were the perfect inspiration. In our guide (which is also on newsstands June 18), you’ll find a whack of stuff that’s actually useful, including a round-up of all of the season’s must-see TV shows and movies, a skeptic’s take on summer beers, stylish fashion picks that keep you the hell out of the sun, and a toolkit for sweaty gals.

Browne, Taylor and Whalen are veterans of Toronto’s Second City Improv program, while MacNeill, who is from Nova Scotia, trained as an actor in the U.K., returning to Canada in 2014. She met Taylor while working on This Hour Has 22 Minutes in Halifax, and pretty soon the four friends were tossing around ideas for a comedy series that would be like Kids in the Hall, except (wait for it) they’re all women and (no, seriously, you’ll die) they’re over 40.

“I was hungry for something that reflected my own experience back to me,” says Whalen, noting that the female point of view gets discounted often at the exact age when women have something to say. “I have my shit together more than I ever did, I’ve lived some life, I have some opinions, but now the culture is not interested in that.” Or, at least, it wasn’t. With awards and accolades rolling in, it’s clear the show has seriously struck a chord.

“People have actually told us that the show ‘humanizes’ women,” says Browne. It’s the kind of incredulous and yet undeniably humorous observation that could easily and its way into a Baroness sketch. “It’s not like we think that the show can save the world,” says Whelan, before turning to the group with a mock self-importance, “but, guys, it might actually save it.”

In the meantime, they’re looking forward to a little R & R, Baroness style, before the show comes back in September for season 3. “I think I do summer smarter now,” says Whalen. “When you’re younger, your friends are like, ‘Let’s rent this cottage we found,’ and you end up in a damp box on a lake full of leeches. Now you know you want a [nice] bedroom, you know to plan ahead.” Taylor is still all about the summer tan (“I know, I know — it’s bad”), while Browne sees the upside of extreme humidity (“It’s great for wavy hair”). Point is, there’s plenty to be excited about: “Canadian winter is hard,” says MacNeill. “Here comes summer. Bring it!”