Ms. Chatelaine: The film critic and author of Sleeping Naked Is Green, talks about her transformation from a common recycler to an eco-inspired woman 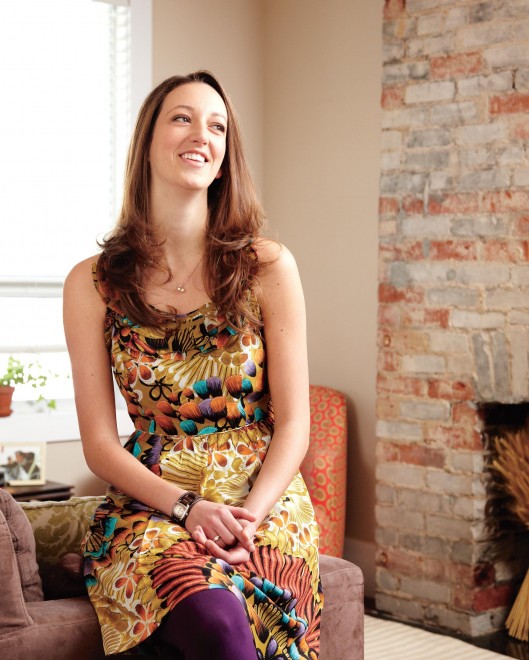 For years, Vanessa Farquharson’s token nod to the environment was rolling the recycling bin out to the curb every week. Then, in 2007, something changed. She was working as a film critic and found herself subjected to a slew of environment-themed documentaries, from An Inconvenient Truth to Who Killed the Electric Car? Seeing the shape the world was in made her want to change things—and that didn’t dissipate when the credits rolled.

“I had no science background, no truly coherent grasp of how climate change worked, but I knew I wanted to do more than just switch light bulbs,” Vanessa says from her home in Toronto. She vowed to make an earth-friendly change every day for a year and, hopefully, inspire others along the way by blogging about each one. “I thought it might add up to something I’d feel good about,” she says.

Initially, everyone thought she was crazy. “I wasn’t raised as an earth-conscious flower child, and my friends are cynical hipsters,” she says. “So when I wrapped gifts in newspaper, my sister said, ‘That’s not pretty. Why would you give gifts that don’t look pretty?’”

Still, she quickly attracted more than a thousand online followers. Then, only a few weeks in, Vanessa realized she was in trouble. “I’d run out of ideas,” she says. “But I’d told everyone I knew, plus another thousand people, that I was doing this. I couldn’t just quit.”

She had started small (ditching bottled water and plastic bags), but took it up several notches (selling her car and building a compost bin, complete with worms, in her living room) once she’d made all the obvious changes. She began combing the web daily and canvassing her followers in her quest for more ways to go green.

The biggest hurdle was finding food: She’d unplugged her fridge and was eating only local and organic products. “Grocery shopping was stressful. I had to figure out where a food came from, assess the packaging, then decipher the ingredients to avoid things like preservatives.”

An unexpected book deal gave her an extra push, as did the effect her efforts began having on those around her. “When just one person responded to one little change, it made me happy. And I had hundreds of powerful, inspiring comments from people. There’s a substantial ripple effect when it comes to this kind of thing — if everyone just makes 10 changes, it has a big impact,” she says.

Now, 366 green changes later (2008 was a leap year),Vanessa still follows about three-quarters of them, including making her own deodorant (a mix of baking soda, grapefruit oil, vodka, arrowroot starch and coconut oil) and preserving her own fruits and veggies. “I live a fairly normal lifestyle, but one that’s much more conscientious. And I feel more powerful, more self sufficient. Now, if I run out of moisturizer, I just go to the kitchen and make it myself.”

When I grow up, I want to be . . . a feisty old lady, full of zingers and inappropriate jokes.

I never leave home without . . . my gigantic vintage tote bag, which fits about half my home inside.

My favourite way to unwind is . . . riding my bicycle, Alistair, through the ravine and by the lake.

My guiltiest pleasure is . . . YouTube. It used to be Cheetos, but the guilt was unbearable.

Coconut oil: “I keep jars in the kitchen and bathroom — it’s fab for cooking and makes a great moisturizer.”

Vintage mugs and teacups: “I love sipping from something with history behind it.”

Arty gifts: “Artist Craig Rubadoux gave me two paintings. They’re the first things I see when I wake up.”

Her eco-friendly mattress: “It’s a natural, biodegradable mattress from Essentia, a Canadian company.”