Whether you're reading them or watching them, it's a win-win situation with these 10 books-to-film 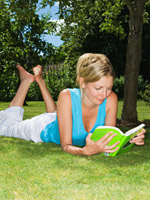 It can be tough to decide whether or not you want to see the movie version of a cherished book. What if it doesn’t live up to your imagination? We asked Chatelaine staff and forum members what their favourite book-to-movie is and why. Pack these great reads for a trip to the beach or pick up the DVD version for a rainy day.

The Lord of the Rings films were well done. The casting was excellent, and the directors paid attention to details that had delighted readers. In fact, some creatures, such as the Balrog, were more horrible and magnificent than I’d imagined. – Queen B
J.R.R. Tolkien, author (1954-55) – Peter Jackson, director (2001-2003)

First choice? Gone With the Wind. Maybe it was Vivien Leigh, but I loved the movie. And while I liked the book, I thought the movie gave Scarlett a more human edge, which made you root for her. – Thia
Margaret Mitchell, author (1936) – Victor Fleming, director (1939)

The Color Purple. I think what I loved most about the book was how the author managed to tell about such brutal circumstances and heartbreaking realities with such beautiful and poetic prose. The hope and optimism that Celie played by Whoopi Goldberg maintains throughout the story is a testament to her character, and something we can all aspire to. All of these themes were depicted very well in the movie, which was great on its own. – Artemis
Alice Walker, author (1982) – Steven Spielberg, director (1985)

When I watched the movie of Girl With a Pearl Earring, everything on the screen looked as I had imagined it would. When I was reading the book, I felt that the setting was damp and grey, surrounded by lots of stones and rocks. It made me want to curl up by a fire with a heavy blanket and a cup of tea. It seemed as if the sun was never shining. The movie brought all of my images to “reality.” I found that the actors they picked were perfect. The setting was exactly as I had described/imagined. I don’t think the sun appeared in the movie either. – Nicsmom
Tracy Chevalier, author (2001) – Peter Webber, director (2003)

The Horse Whisperer. In both the book and the movie I was drawn to so many of the characters. An excellent job was done of making the reader/viewer feel she had a glimpse inside each character without ever feeling manipulated into feeling certain ways. The relationships in the story are rich and deep. I didn’t ever feel as if something was clichÃ½d or overdone. – Tumbleweed
Nick Evans, author (1995) – Robert Redford, director (1998)

I studied English literature at university and was drawn into the world of Jane Austen by her ability to transcend the difference of time and space with the sheer humanity of her characters. My favourite book was Sense and Sensibility, rich with the darker underside of romance and courting, class structure and jealousy. I thought the movie version was refreshingly true to the themes of the story – bringing to life the essence of the characters, without diluting or omitting key elements of the story. With most movie adaptations of books, you are painfully aware of the gaps in the screenplay and end up feeling cheated from the experience instead of enriched by it. – Jennifer Whitfield, editorial production manager
Jane Austen, author (1811) – Ang Lee, director (1995)

How about Beaches? In the book, you feel that sometimes a deep-rooted, long-lasting friendship doesn’t need a lot of watering. Bette Midler and Barbara Hershey sure brought the friendship to life. I still cry each time I see the reruns. – Lyn Chua, test kitchen manager
Iris Rainer Dart, author (1988) – Garry Marshall, director (1988)

OK, this is totally embarrassing, but I loved the book The Prince of Tides, and I loved the movie just as much, which is rare. Barbra Streisand is cold, then entirely vulnerable as Dr. Lowenstein, and Nick Nolte is such a perfect mix of aloof and sensitive that he’s actually attractive (for once). That last scene is EXACTLY how I pictured it in the book. – Dré Dee, senior editor
Pat Conroy, author (1986) – Barbra Streisand, director (1991)