Nine easy ways you can help save the planet 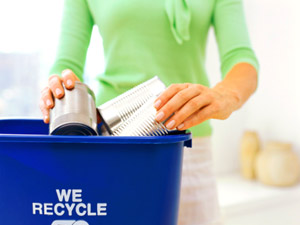 According to a recent Globe and Mail poll, four out of five Canadians say they’ve seen climate change first hand. Whether it’s devastated trees in Stanley Park, melting icecaps in Greenland or January golfers in P.E.I., Canadians are taking notice of the environment. Many agree that no single act will solve the problem. We need government, we need industry and, perhaps most importantly, we need everyday Canadians to drive the green agenda. So, if you haven’t gone green yet, now’s the time. Here are nine easy steps to help restore the planet.

Turn your gadgets off

Some electronics such as cell phone chargers and TVs still draw power even when they’re turned off, according to the David Suzuki Foundation. To avoid this, get a power bar and turn the switch off when not in use. Also, if your computer monitor doesn’t power down automatically after a specific period of inactivity, set it to do so. This saves more energy than using screensavers, which keep your computer running at full speed, says Suzuki.

Elizabeth May, leader of the Green Party and former Executive Director of the Sierra Club, one of the oldest grassroots environmental organizations with chapters across North America, says she makes her energy efficient improvements one step at a time, as she can afford them. Her most recent upgrade was her fridge, and it’s paying for itself through electricity savings. According to Suzuki, replacing a 10-year-old refrigerator with a new EnergyStar-approved model saves enough energy per year to light up your entire home for three months. Get more appliance efficiency information at Natural Resources Canada.

Use your shopping vote

“There is no such thing as throwing something ‘away’,” says Gagan Leekha, Grassroots and Development Coordinator of the Sierra Club, British Columbia Chapter. “All of our garbage ends up in our soil, water and air – and this inevitably affects our health.”

Practice the three R’s: reduce, reuse, recycle – but reducing is the most important, says Leekha. “Decrease the amount of garbage (especially packaging) that you bring into your home, so you have less to put out on your curb every week.” Plus, she says, think before you buy. Consider where the product came from, what the environmental cost was to make and transport it, and what kind of packaging was used. When you add up those factors, buying local makes the most sense almost every time. An apple, for example, that is grown in New Zealand travels 12,000 more kilometres to reach our kitchen tables than an apple grown close to home. The result is more than 50 times the amount of environmentally harmful greenhouse gas emissions released into the air.

In Ireland, a recent 15 cent tax on plastic bags has cut down the number of bags used by 90 per cent. Before the tax, the country was generating 1.2 billion bags per year, similar to other industrialized countries like Canada.

To make the switch yourself, pick up a reusable canvas bag (sold at many grocery stores) for your shopping trips. Sobeys, for example, sells the Green Bag for Life, which holds 20 kilograms and costs $1.99. They also have plastic bag recycling and advise employees on how to pack more into a single bag, which can reduce the total number of bags used by 20 per cent. Other retailers, like Whole Foods in Toronto and Vancouver, offer incentive programs such as giving customers 10 cents for every bag they bring in.

Have a recycle party

Dying for a new pair of shoes or a great skirt? Throw a recycle party. Here’s how it works: invite a bunch of girlfriends over and tell them all to bring clothes that they like, but are sick of wearing. Then swap. You can also have a kids’ clothes exchange (this works better if the kids are different ages and sizes) or a toy trade. Take it even further and try it with household furnishings.

Reduce the cost of your lunch

If the environment absorbs your take-out packaging, especially Styrofoam, which is made from polystyrene, your lunch could be a lot more expensive than you think. Pack your own lunch when possible, and on the days you can’t, seek out restaurants that use environmentally friendly containers for take out. Better yet, bring your own reusable container to the restaurant.

If you have kids, teach them to bring home their lunch containers everyday so that you can wash them out and pack for the next day. “I do lunch room duty three times a week and I’m amazed at how wonderfully some parents are able to pack healthy lunches in reusable containers,” says Fay Chomik, grade three teacher at Crestwood School in Medicine Hat, Alta. “The great thing is the child is learning to re-use through this process. And it really reduces waste in the lunch room.”

Be political and get involved

“Writing letters to the editor and politicians can be extremely effective,” says Elizabeth May. “Let your government know when they’re doing something that’s unacceptable to you.” Noel Keough, Assistant Professor of Environmental Design at the University of Calgary, agrees. “Attend public meetings and volunteer to serve on committees and decision-making bodies in your community so that you contribute to and become more knowledgeable about the issues.” Or, start your own group. Sustainable Calgary Society, of which Keough is the Executive Director, for example, works to engage citizens to promote individual actions and involve citizens in policy making.

For more ideas of what you can do, visit Go Green, a regional transportation choices program in British Columbia designed to help employers encourage sustainable commuting to the workplace.

Not sure about the concept of global warming? You’re not alone. Understanding the science and details isn’t always straight forward. For a solid run down, watch the Al Gore documentary, An Inconvenient Truth. This movie clearly explains the science and potential implications of global warming. For a Canadian perspective, visit David Suzuki’s website, Davidsuzuki.org.

Ask those who really matter

Our children will have to deal with our mistakes, so let’s engage them now. “Lead by example,” says Leekha. “Spend time enjoying the outdoors with your children. After all, we tend to want to protect what we love.” She also encourages asking your kids what they think. They might have some great ideas. “I know when I was younger I was the one that convinced my parents to start recycling and composting,” says the now 29-year-old Leekha. Fay Chomik agrees. “It’s sometimes the kids that have the best ideas and when they talk, parents listen.”