The New Gerber Baby, Who Has Down Syndrome, Is A Small Step In The Right Direction

Little Lucas Warren’s win is a heartening moment for children (and adults) living with disabilities. But it’s also a reminder that we’ve got a diversity-casting problem. 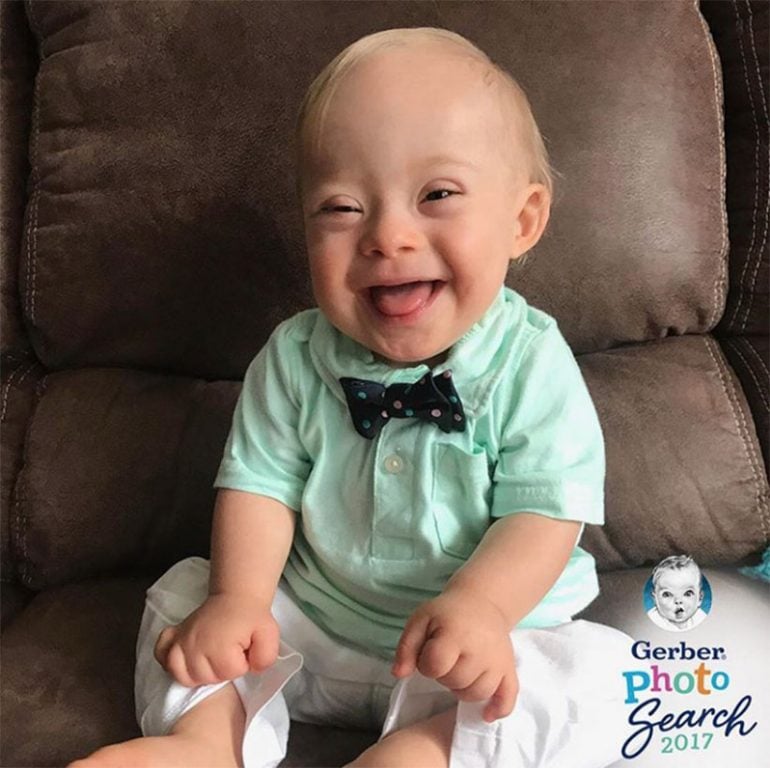 At just 18 months old, little Lucas Warren has clinched a title that would make all precociously charming tots envious (if they had yet developed envy): Gerber Baby. Plucked from more than 140,000 submissions, the Dalton, Georgia native will receive US$50,000 and act as the featured “spokesbaby” for the company’s marketing campaigns.

But Lucas isn’t just another set of chubby cheeks in a sea of chubby-cheeked Gerber hopefuls: He has Down syndrome — a chromosomal disorder typically associated with delays in physical growth, characteristic facial features and varying levels of intellectual disability — and is the first baby in the company’s nine-decade history to have the condition. Warren’s parents have said they hope Lucas’s selection might “help more individuals with special needs be accepted and not limited,” and his win has been lauded by advocacy groups.

They are right to celebrate: Lucas is a beaming, bow tie–wearing (!) pint-sized example of inclusivity hitting the mainstream. And, who knows? Maybe the littlest Warren, whose parents entered him into the Gerber pool “on a whim,” will decide — in a few year’s time, after receiving his Kindergarten diploma — to make the well-trodden transition from child model to child actor. But then, it’s worth asking: What roles will he play?

By now, it goes without saying, unless you are a white, straight, cisgender, able-bodied man — the undisputed pinnacle of the identity-politics privilege pyramid — the Hollywood casting circuit is going to prove problematic, if not outright hostile, for you. Longstanding issues of gender discrimination and sexual harassment have heretofore been addressed by industry campaigns like #AskHerMore and, most recently, #TimesUp. The annual diversity drought on display at the Oscars and the Grammys has been spotlit by hashtags like #OscarsSoWhite and #GrammysSoMale. As yet, there is no #OscarsSoAbled, and to look at the casting stats for differently abled people, you might be baffled as to why.

A report by the Media, Diversity and Social Change initiative found that, as recently as 2015, a mere 2.4 percent of characters in Hollywood’s 100 top-grossing films “who spoke or had actual names” had disabilities, which is disproportionate in comparison to the 18.7 percent of Americans living with developmental delays. (Canada’s numbers are close, at 13.7 percent.) Just 10 of those movies featured people with disabilities in a starring or co-starring role. And to narrow it down further, of those roles in those 10 movies, the study classified 32 percent of them as “inconsequential” to the plot.

The quality of roles available to people living with special needs is equally as damaging as their limited quantity. As with visible minorities and LGBT individuals — and anyone else the entertainment industry still maddeningly regards as “fringe” — people with disabilities are shoe-horned into unimaginative tropes like “the tragic invalid” (What’s Eating Gilbert Grape?), “socially inept savant” (The Good Doctor) or “lovable, nuance-lacking sidekick” (Finding Nemo’s Dory, who is undoubtedly charming, but nonetheless a cartoon fish). They are rarely, if ever, pictured participating in the mundanities of human life: working, attending school, grocery shopping, navigating relationships. When they are represented at all, their character development rarely, if ever, extends beyond the limitations of their developmental condition. Perhaps worst of all, they are rarely, if ever, played by people with disabilities.

Again, my mind floats back to Lucas, who, right now, is probably tucking into his lifetime supply of pureed carrots in a high chair somewhere along the eastern seaboard, blissfully unaware of the thinkpieces he has sparked and the doors he has possibly, unwittingly opened for differently abled kids. He is still likely a few years off from the realization that he was once considered a “famous” baby, or that society deems him “different” (whatever that even means), or, longer term, having to make any decisions about his small- or big-screen ambitions.

In or out of the entertainment business, maybe, by then, he’ll be seen as something quite exceptional: a regular kid.