Ms. Chatelaine for the month of August, director of the Urban Shaman Contemporary Aboriginal Art gallery in Winnipeg, talks about her role in promoting and redefining Aboriginal art 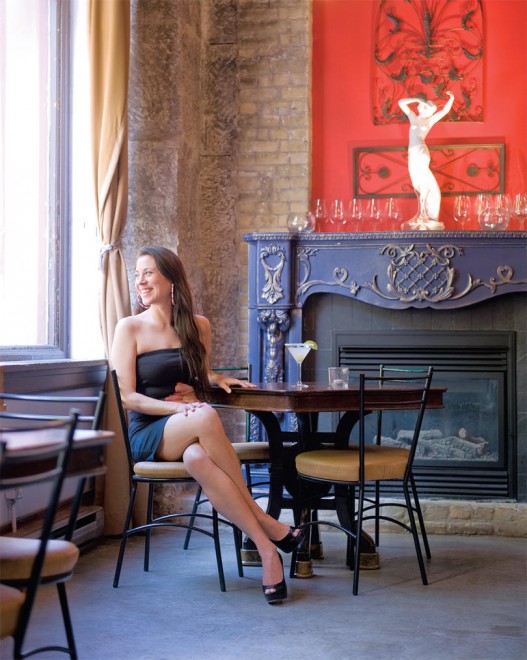 “I survived a winter in Winnipeg!” jokes Amber-Dawn Bear Robe, listing it triumphantly among her many achievements of the past year. Upon arrival, the art historian and curator immediately channelled her energy into the Urban Shaman Contemporary Aboriginal Art gallery, one of a handful of artist-run Aboriginal-art centres in Canada. She moved to the sub-zero climate of the prairie city from toasty Tucson, Arizona, where she completed a master of arts in American Indian studies. It was a natural move for Amber-Dawn, who is actually no stranger to the cold — she’s a Blackfoot from the Siksika Nation in Alberta.

Starting out in 2010 as the newly minted gallery director, she spent her first year high-heeling it to meeting after meeting with arts councils and benefactors “If I don’t get grants and operating funds, then this gallery will cease to exist,” explains the behind-the-scenes mastermind, who works in overdrive to create an institution where talent can shine. Determined to build on the solid foundations of the 15-year-old Urban Shaman gallery, the art history major found funding to jump-start a media gallery within it. She also helped put on a landmark exhibition featuring work from the Indian Group of Seven, something that hasn’t occurred since the artists originally made waves during the ’70s.

Amber-Dawn credits her heritage and her father, Andrew Bear Robe, an active policy-maker and former CEO of the Siksika Nation, with instilling in her the drive to be active and involved in the community: She’s also a member of Mentoring Artists for Women’s Art, a Winnipeg-based program in which she gives guidance to an up-and-coming artist. “Being from Siksika has always encouraged me to give back. It’s a responsibility that I’ve grown up with,” she explains. Her younger brothers share this view: Kennedy, 25, is taking First Nation legal studies at the University of British Columbia, and 27-year-old Aaron owns the newly opened Keriwa Cafe in Toronto, which features a mix of local and Aboriginal-influenced dishes. When she’s not immersed in art, Amber-Dawn spends time with film director and beau Chris Eyre (who has received nods from the Tribeca Film Institute and the Directors Guild of America) or relaxing with her girlfriends. It’s not long before the high heels are back on, though. “I love them!” she confesses.

Garnering international buzz for contemporary Aboriginal art to cement its place in art history is Amber-Dawn’s next goal. This will include redefining Aboriginal art to cover everything from collectible craftwork, like handwoven baskets and beaded jewellery, to modern mixed media and installations. “Our nations are diverse and complex: There are over 20 different nations in Alberta alone, never mind across Canada—and there’s no one way to define Aboriginal artists or Aboriginal people. Contemporary Native art pushes the boundaries of what Native people, and art, are about.”

My proudest moment was…curating my first exhibition at the Glenbow Museum, featuring the artwork of Kevin McKenzie.

My guiltiest pleasure is…lime margaritas on the rocks

My favourite moment of the day is…reading in bed before going to sleep. I’m loving Indian Killer by Sherman Alexie

The biggest mistake I ever made was…not spending enough time with my brothers when they were growing up.

Clear M.A.C. lipglass: “I like to have a natural, clean kind of look — not too made up.”

Statement earrings: “The bigger the better.”

My cat, Gemini: “She keeps me going during rough times.”