Four annoying neighbours and how to deal with them

These neighbours range from clueless to downright rude! Get expert tips on how best to approach and solve the problem all while keeping the peace. 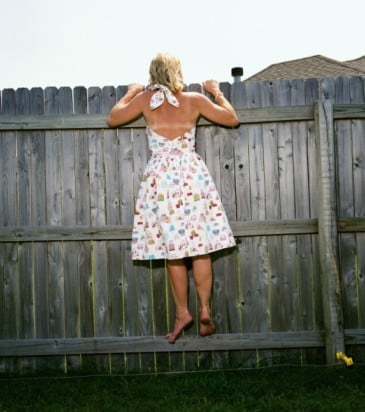 We recently ran a post in our Social Quandary series about a neglectful neighbour with a broken gate and it clearly struck a nerve as since that time we’ve received many emails from readers complaining about their neighbours. And so we contacted Suzanne Noruse, etiquette expert and founder of the Protocol School of Ottawa, for advice on how to rectify an irksome situation without severing neighbourly relations. She came back with solid advice for four specific situations from readers and words of wisdom to keep the peace.

Q: I have a neighbour who asks me about my overnight guests. They want to know who the visitors are whenever they see a car parked in my driveway overnight. I don’t feel comfortable sharing and really, it’s none of their business. How can I respond politely?

A: I suggest the less is more approach. Each time your neighbour asks the same question respond with the same answer, “A friend” and change the topic. “A friend. Isn’t Mrs. McGregor’s magnolia beautiful? Do you think one would grow beside my garage?”. Next time they ask respond, “A friend. Have you heard any more about our request to have the speed limit lowered to 25km on our street?”

Q: We have a neighbour who leaves his blue bin overnight in the driveway. We came out the other morning to find garbage on our sidewalk after some animal had clearly been rummaging during the night. We have a beautiful street and want to keep it that way. How can we appropriately approach our neighbour about this problem?

A: Try picking up the litter once and putting it back in their blue bin. If they see you doing this, it may be enough for them to keep their blue box inside the garage until the morning. If this does not jog them then a friendly chat indicating that the location of the box is drawing unwelcome animals. The emphasis here is on friendly. Keep it light, your tone non-critical, and don’t raise your voice. They might just need a little reminder.

Q: We put up a beautiful wooden fence between our house and our neighbours for privacy. Our neighbour wasn’t happy with it and shoveled snow against it all winter. He is also a smoker and now that the snow is melting we’re finding a lot of his cigarette butts along our fence and also on its ledge. What do we do?

A: I agree, he does not sound happy with your new fence. I suggest starting softly. Pick up the butts — once. If this does not change his behaviour then try a friendly, diplomatic chat. Keep calm and point out that the fence benefits both of you. You both have privacy. He doesn’t have to see your children’s bikes or your snow shovel collection. If he responds aggressively then it is time to contact the authorities.

The neighbour from hell

Q: Upon moving into our new home last July, we were warned that our next door neighbours were troublesome. I was told that prior to their house now, they had caused issues in their last two places, and the police were involved several times, including one incident involving a 911 call for an outdoor fire.

So far they have had one fire that wafted smoke in our house and on another occasion she accused us of stepping on her plants while we were erecting a fence — something we put up to prevent further confrontations. Also, since we’re new to the neighbourhood, I’m worried about what other neighbours think about why we haven’t befriended this couple. I don’t want to out them as bad neighbours, but I don’t want to be friends with them either.

A: It sounds like they will move on once there are enough complaints. This has been their pattern. In the meantime, fires should be taken seriously. Fires of all kinds require a permit. Call the authorities and have them deal with the fire problem.

The fence you have erected should keep you from a lot of face-to-face encounters. A wise move. If there is a direct confrontation don’t raise your voice even if they raise theirs. It only inflames the situation. Pick your battles.

As for the thoughts of your other neighbours, they will find out in short order about the new neighbours if they repeat their pattern of behaviour. If questioned directly indicate that you were warned, which alludes to their problem behaviour without sounding gossipy.

Are you dealing with an annoying neighbour, too? Suzanne Noruse provides tips on how best to approach the subject:

“Be courteous, it’s not all about us,” says Nourse. “There are times when we need our neighbours or they need us and if you have alienated them over a stewing compost pile, it can be pretty sad.” Think about how you would want to be treated and apply it to how you approach your neighbour.

If your neighbour doesn’t pick up on your body language or hints, being honest could help clear the air. It’s hard because your emotions can come to the surface, says Nourse, but try approaching them in a nice manner and directly ask them to stop their annoying behaviour.

If your neighbour refuses your attempts at a peaceful reconciliation, you might have to see if their bad habits are covered by a bylaw, says Nourse. In most municipalities early morning and late night noise are restricted to certain times and there may also be bylaws about keeping your sidewalks clear of snow.

4. Avoid doing it with a written note

“If you start with a note, they’re very likely going to become defensive,” says Nourse. “They might not have any idea that they’ve been doing anything that’s irritating and suddenly they get this note on their door from you.” When your neighbour reads your note, they can also put their own tone on it, changing your light-hearted intentions into angry complaints.