Footwear debate: Is it ever OK to wear flip-flops at work?

With warm summer weather comes one or two sartorial dilemmas. When it’s 40 degrees outside, standing on the streetcar during the morning commute in a sensible shirt is a challenge not only to one’s tolerance but to the strength of one’s deodorant. 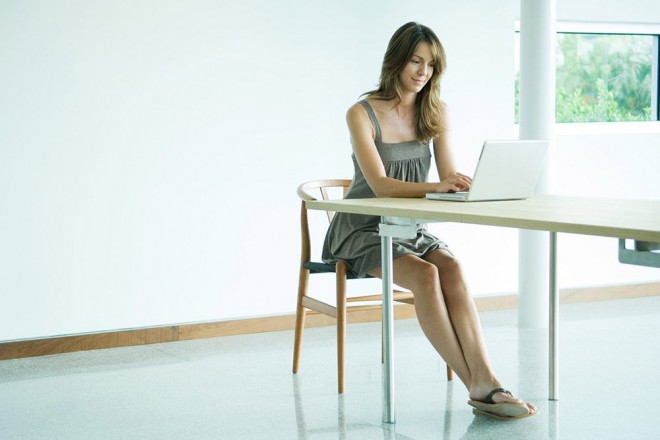 When it’s 40 degrees outside, standing on the streetcar during the morning commute in a sensible shirt is a challenge not only to one’s tolerance but to the strength of one’s deodorant. Not surprisingly, hot weather will occasionally bring out a more casual approach to work wear.

But are people who choose to wear flip-flops to work going beyond casual and heading into unacceptable ‘Saturday-morning-at-the-farmer’s-market’ territory? Moreover, by wearing flip-flops to work do you damage your professional credibility?

That’s the argument the editors of Maclean’s recently put forward in a brief take down of the increasing ubiquity of the popular rubber sandal.

The magazine quotes Bata Shoe Museum curator Elizabeth Semmelhack declaring, “Flip-flops say you’re not fully engaged in the business environment. You’ve got one foot in the office and one on the beach. It makes a very loud statement about casualness.”

That loudness is both metaphorical and literal, she says, “There’s also the aggravating noise they make — flip-flop-flip-flop — and that can be very distracting.”

I can’t say that the noise of rubber hitting concrete or hardwood is any less distracting than the clickety-clack of high heels, but I get what Semmelhack is saying. Additionally, I do see how it may be hard to take your boss seriously when she’s wearing frayed cargo shorts and flip-flops. And yet, I also understand the temptation to sneak into work wearing something that makes sitting on your backside for eight to nine hours a little more comfortable.

While a few workplaces have even gone so far as to ban the wearing of flip-flops, other work environments have always maintained a ‘business attire’ wardrobe culture. Ultimately, as the editors at Maclean’s point out, context is king. If you work in an environment that winks at formality then go ahead and flip-flop your way to the top. If you don’t, then it might be wise to succumb to peer pressure and wear more sensible work shoes.

Do you think flip-flops are appropriate at work?