Foodie-approved fast food out of a truck? Oh, yes. Across the country, gourmet grub is up for grabs from these kitschy on-the-go restos 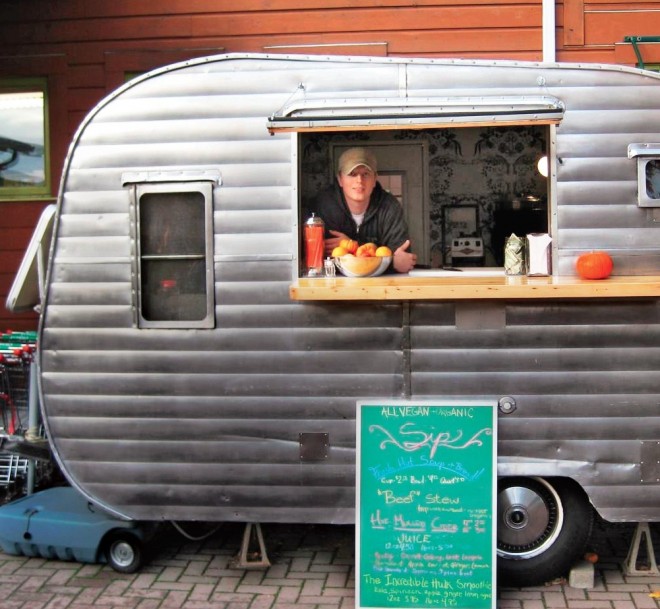 This repurposed black Purolator truck is owned by lifelong buds Graeme Smith and Scott Austin, who started serving up oooey-gooey cheesy goodness in July 2011 when they were both laid off from their day jobs.

On the menu: Gourmet grilled cheese.
Bestseller: The lumberjack: aged cheddar, bacon, Granny Smith apple and Canadian maple syrup on white.
Hot spot: The truck’s not stationary, so follow the Purolator logo on the hood as it cruises “The Hammer,” check Twitter, or catch it on the Food Network’s show Eat St. which airs this summer.

On the menu: Big juicy artisanal burgers.
Bestseller: The original Alley Burger—handmade garlic pork-sausage patties with Quebec cheese curds and piri piri aioli.
Hot spot: They’ve been serving up Alley Burgers since August 2011 after upscale Charcut Roast House started a late-night $5 burger-only dinner menu in the alley behind its chi-chi restaurant. The late-supper success encouraged the team to take the burger on the road, and—boom!—the Cowtown chuck truck was born.

The co-ownership of this made-to-order, brand-spanking-new trailer, by Aramark and Dalhousie University, came about when a survey showed students were left with a bad taste in their mouths over the lack of diversity in food served on campus. The uni listened and countered with the My Three Cousins food truck, an A+ idea!

On the menu: Melt-in-your-mouth European and Middle Eastern cuisine.
Bestseller: It’s a toss-up: The Chicken Shawarma is the front-runner, but Greek Fries, hand cut and topped with feta cheese and tzatziki sauce, run a close second.
Hot spot: The truck has been parked since October on the Dalhousie campus at University Avenue.

Is there a food truck near you that you’d like to recommend? Please share with us on the comments below!