Deputy editor Laurie Jennings had the chance to drive a Mustang... with a manual transmission. Here's how she learned to drive a standard car in just a few hours. 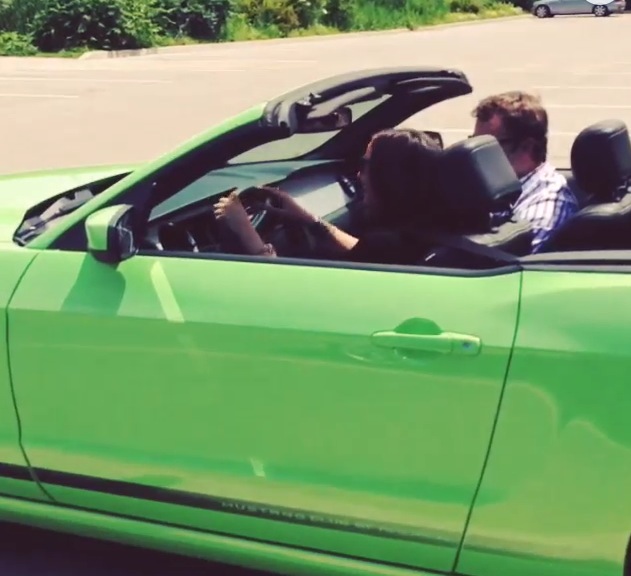 Laurie Jennings in the Gotta Have it Green Mustang

Imagine sitting in the driver’s seat of an electric green convertible – a 2014 mustang to be exact. The light has just turned green, and you’re ready to roll. Except you can’t because you’ve stalled the car at least five times. And instead of cruising through the intersection, the car is wildly jerking back and forth as other drivers whiz around you… honking, swearing and much worse.

This is my reality about one hour into my first stick shift lesson, one balmy late summer afternoon. Like most people I got my driver’s license the second I turned 16, but I’d never ventured into standard territory. I’d always wanted to, even tried a few times, inevitably failed (miserably). So when the offer came to test out a new Mustang, complete with a promise that I’d be good to go on my own after spending just a few hours with a pro from Ford Canada, I jumped at the chance.

When I first set eyes on the car, I almost change my mind. It’s so bright! (Actual colour name: Gotta Have it Green.) I’m told the classic bulky styling is intentional. It’s an icon after all – one that’s about to celebrate 50 years on the road. Once seated in the leather bucket chairs, I find it roomy and comfortable with just the right amount of bells and whistles. Everyone nearby literally stares as I press the button to put the top down. I’m not going to lie. It did take some serious effort to feel comfortable at the wheel, but I eventually got there.

If you decide you want to try driving a standard car, here are my five tips for success:

1. Choose a car that won’t turn heads. In other words, don’t follow my lead. Mustangs get noticed, so do convertibles and bright colours. And other drivers expect you to have the skills when you drive a ballsy car like that. Instead borrow a friend’s older, rustier, more innocuous wheels and you’ll be more likely to elicit sympathy from others.

2. Find a patient co-pilot. Mastering the clutch, gears and parking break – and the order to use them – will be hard at first. The last thing you need is somebody rolling their eyes or getting testy when you stall the car or need the instructions re-explained. Your partner may not be the best person to do this with. Even for the most solid relationships, this is exactly the type of scenario that could lead to silly squabbles. Put the breaks on that by finding an easy-going friend or pay someone.

3. Eliminate all unnecessary distractions. The key to mastering manual transmission is getting a feel for the car and the pedals under your feet. You’ll also need to listen to the engine revving and pay attention to the RPM. It’s a lot at first. So turn off your cell, turn off the radio and avoid bringing anyone with you other than the person who’s helping you learn.

4. Be on the road when other aren’t. Less traffic means less headaches and embarrassment (not to mention less potential for an accident). Drive around before you begin to find the ideal place to start your lesson — a long, flat low-traffic road in an industrial area that doesn’t have many lights would be perfect. Then pick a time outside of rush hour (weekday morning or afternoon, for example).

5. Fight your instincts. When you can get into and out of first gear easily on flat land, you’re ready to upgrade to hills. If you learned on an automatic, this means overcoming the natural response to step on the gas when the car starts to roll back. Instead do the opposite. Release the clutch, and trust that a little gas is all you need. When you hit the sweet spot, you’re off to the races!