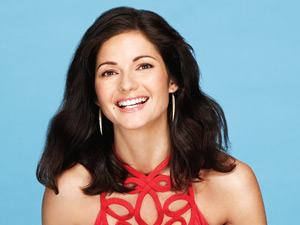 “I am large, I contain multitudes,” wrote Walt Whitman, and the same might be said of Jill Hennessy, who leaves every interviewer impressed with her bewitching complexity. She’s a proud Canadian who’s also grateful to the U.S. for all it has given her. (A fruitful career, a loving husband, two wonderful children). She’s a financially successful actress who favours inexpensive vintage clothing and sends her son to public school. Herewith, the top five things you don’t know about Jill Hennessy and would never have guessed.

1) She’s a TV star who doesn’t like watching TV.
“I’m not really a big fan of scripted television – although I respect it!” Hennessy says with a laugh. “ But I have a hard time getting into drama. Comedy, I enjoy a little more. But I guess being hyper-exposed to the TV medium, I guess it’s just hard giving myself over to the inherent deceit.”

2) Her characters have backbone, but she’s missing a part of her spine. Literally.
“In the ninth month of my last pregnancy, I had this horrible sciatic pain,” she recalls. “I went to see a pain specialist and he said, âOh, this is very interesting, you actually are missing the last curve in your spine.’ What’s weird is that I’ve always been very flexible. But I’d also thought, God, my back just looks weird, it doesn’t look normal to me.”

3) She didn’t need the current economic crisis to teach her to be fiscally conservative.
“As an actor, you never know when the plug is going to be pulled, no matter how secure a job might seem. Every year, on Law & Order or Crossing Jordan, we never really knew if we were going to be picked up. I’ve always lived with the idea of just putting the money in the bank. I’ve never invested in anything, to be honest.”

4) She’s a proud Canadian, but she’s useless at hockey.
“Nope, no hockey,” says Hennessy. “I could barely skate, I never really skied, it’s really sad. I’m ashamed as a Canadian to admit that, it’s kind of pathetic.” But that doesn’t mean she’s not athletic. “The one thing I could do was sit-ups and chin-ups,” she recalls. “There was a kid who always bullied me too, when I was 7, at school.” She was put up against him in the Canada Fitness Test that schools used to administer to students in the 1970s and â80s. “So guess who did 62 sit-ups in 60 seconds?” she says proudly. “And the flex arm-hang? I stayed on that thing for a minute and a half! And of course this kid – big kid – dropped.” He never bullied her again.

5) She owes Blue Rodeo a bunch of money.
When Hennessy first moved from Toronto to New York with the Broadway production of Buddy in the fall of 1990, she’d pass her free time busking with cast mates in Central Park, playing a repertoire that leaned heavily on Blue Rodeo and Barenaked Ladies. “Nobody down here knew the songs, which was great, because they’d assume we wrote them.” she says. “I did meet Jim Cuddy once and told him I probably owed him a lot of royalties for playing their stuff. One of the bands I was playing with when I got Law & Order was called The New Originals. We did [Blue Rodeo’s] ‘Five Days in May’. Great song.”