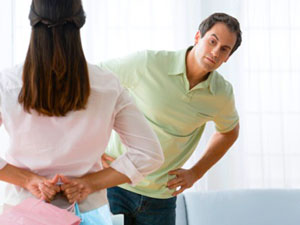 We all have friends like Jennifer, who, let’s say, is a married woman with a well-paying job who likes her lunch-hour shopping sprees. One day, Jennifer heads to a department store with a colleague, picks out a bunch of blouses on sale, heads to the cashier and hands over three credit cards: She wants the $250 purchase split three ways. The cashier doesn’t blink an eye, as if she is asked to do this all the time. The expression on her colleague’s face, however, is anything but approving. It is downright accusatory.

Jennifer was caught in the act of financial fibbing. But she wasn’t about to explain herself. She had been financially secretive for years, the length of her marriage. It plays out like this: When she shops, she never tells him what she buys. To cover her tracks, Jennifer asks salespeople not to give her boxes if she buys shoes, and discreetly brings a new pair of heels home stuffed in her handbag. In fact, she sneaks most of her shopping bags into her house and rushes to pick up the mail to intercept the bills. Her husband sees only what Jennifer wants him to see because she carefully controls what gets charged to their joint account. She certainly never tells her husband about her full deck of secret credit cards. Or she’ll pay in cash. Or lie and say it was on sale.

Jennifer doesn’t actually think that she’s being dishonest; it’s more that she feels a twinge of guilt rise up from some deep internal cavern every time she spends more than $100 on herself. She’s not even sure her husband would be all that upset about her purchases. After all, Jennifer earns $80,000 and she spends her own money on her shopping. Simply put, she just doesn’t want to have to justify her spending.

Financial fibbing is one of the best-kept secrets in modern-day relationships. For Manisha Thakor and Sharon Kedar, co-authors of On My Own Two Feet: A Modern Girl’s Guide to Personal Finance, which comes out in June, this kind of deceit can be incredibly hurtful when a spouse finds out.

“This is an all-too-common problem,” they tell me. “It’s really important for people in a committed relationship to reveal themselves, financially speaking.” Still, hiding purchases, they concur, is easier than having a partner ask, “Do you really need another pair of black pants?”

The perplexing assumption entangled in all of this is that women are dishonest – they snip price tags and hide purchases for their kids – even though they’ve more than earned the right to spend money they’ve earned outside the home. What stings is that financial independence hasn’t brought women peace of mind to shop openly for whatever they want.

For some women, it’s the perpetual worry that their partners will think they’re not budgeting well, or that they’re spendthrifts. Many times, women are embarrassed. Akeela Davis, a British Columbia-based financial divorce specialist, says she hears stories of women telling their spouses they bought things on sale, or that someone bought something for them as a gift. “When you look at the motivation for that, you have to ask, Why?” she says. “There is some sort of insecurity, or worry about how their partner reacts to money. And if they don’t think their partner will approve, women ask themselves, ‘Why am I going to put myself in that situation? Why would I tell him?’ “

But it’s not just the small purchases – a Gap sweater or pair of cheap shoes – women lie about. “I just had a client the other day who received a $5,000 bonus from work and had been receiving it for years,” says Davis. She hid the cheque from her husband because it was her money and she thought she could do what she pleased with it. She didn’t for a second consider this being deceptive, says Davis. “For women, there’s a lot of rationalization going on.” For other fibbers, however, it’s problematic. “It’s like a sexual affair: If you keep doing it and know you’re not being completely honest, the guilt does eat away at you,” observes Davis.

The irony is, women aren’t the worst financial fibbers. In the scheme of things, they merely fib about retail purchases. That’s nothing compared with men, who are more likely to be secretive about expenses incurred at a strip club, for example, or the cost of bad business decisions. Sloan Levett, director of Fuller Landau Private Wealth Advisory Group and a financial planner, says that in general, “men are more prone to hide or neglect to inform women of the big-picture family finances, whereas women may neglect to disclose to their husbands purchases like clothing or jewellery.” In other words, men financially fib for much scarier reasons.

Still, Thakor and Kedar believe partners must commit to keeping each other in the loop on financial events. They suggest an “annual checkup” as well as setting a limit, and the partner who exceeds it has to own up. “We don’t think it’s ever okay to hide things from a committed partner. The root of any good relationship is honesty – about the good, the bad and, yes, the ugly. Hiding ‘small’ purchases all too often starts you down a slippery slope,” they say. “Committing to financial honesty with your partner is the only way to work together towards financial bliss.”

Great in theory, but we’ve earned the right to spend what we want, when we want, on what we want. And let’s face it: Men, more often than not, don’t even notice when we get our hair trimmed, so why would they notice one more sweater or pair of shoes? Maybe this is why someone like Jennifer has no plans to stop sneaking bags into the house. “I just don’t want to deal and I’ll never want to deal,” I can almost hear her saying. “No man could ever understand why a woman needs five black sweaters. There’s no good way to explain it, so why bother. We just do.”