Excerpt: Out of the Blue by Jan Wong

In this exclusive excerpt from her new book, Out of the Blue, Jan Wong, one of Canada's most controversial journalists, turns the mic on herself to talk about her sudden and unexpected battle with depression 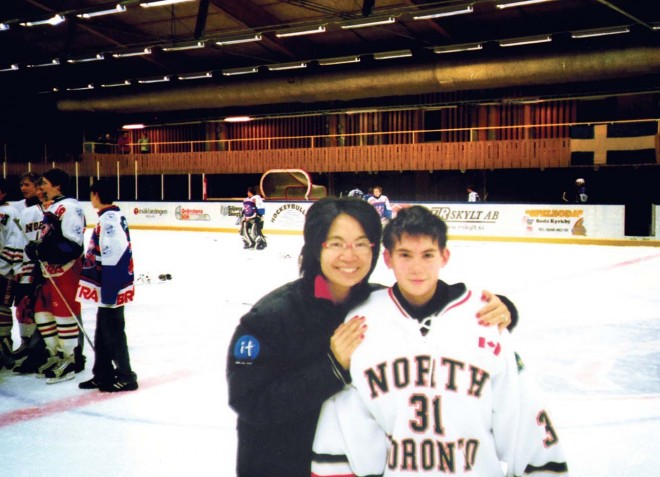 Jan and Sam on the rink in Sandviken, Sweden

In September 2006, reporter Jan Wong was excited to be setting off on a big assignment: covering the Dawson College shootings in Quebec. Shortly after her story appeared, she began receiving menacing letters and death threats. As things quickly spun out of control, she fell into a deep depression, began questioning her own sanity and eventually lost her job. In her new book, Jan looks back on what happened and reveals how a life-changing (and baffling) period in her life affected her closest relationships. On her doctor’s advice she went with her son on a hockey trip to Scandinavia, which turned out to be more of a burden on their relationship than the bonding she was hoping for.

In fight-or-flight mode, I jumped on a plane for Helsinki for another dose of the geographic cure. The more my writing failed me, the more I fell back on my motherhood role. I was looking forward to two whole weeks with Sam. I didn’t understand that depression reverses roles and flips relationships inside out. I was the mother, but increasingly I looked to my thirteen-year-old son to mother me. I had become narcissistically needy, pathologically clingy.

In a daze, I got on and off buses in small towns with names such as Lohja, Sandviken and Leksand. I checked into quaint hotels with gingerbread trim and Spartan dorm rooms at rural sports institutes. I ate breakfast by candlelight and watched hockey game after hockey game. I must have been pretty far gone to expect a cure for depression in a land where the sun sets by early afternoon. Everything made me cry: the bare trees dusted with snow, the endless bus rides, even standing at attention for a scratchy, pregame rendition of “O Canada.”

I was a hockey mom having a nervous breakdown. At a game in Sweden, I began to weep in earnest. Our team was getting slaughtered: nine goals against us in the first five minutes. Sam’s co-goalie had been in net, but now my son was about to take his place. Suddenly, through a blur of tears, I watched the coaches confer. Soon half the Swedish team was donning Canadian jerseys and half the Canadian team was donning Swedish jerseys. The mixed teams played happily together, each thrilled to be wearing the others’ colors. Like an idiot, I cried even harder.

I remained deeply depressed, but at least the geographic cure was diverting. I steamed myself hot pink in a Finnish sauna, and then ran barefoot and naked through darkness and gale-force winds down a stony path and a wooden staircase to the frozen dock. I dipped a toe in the slushy lake, which was one degree away from forming ice. I gasped in shock. Gritting my teeth, I forced myself in until the water reached my armpits. I thought I would have a heart attack. Instantly I hauled myself out and raced back, footprints freezing on the dock, up the staircase and up the stony path, to the sauna.

Later, I suggested to a Finnish parent that the custom seemed a tad extreme. “You jumped in the lake?” she said, surprised. “We only do that in the summer.”

Sam was a newcomer on the team and by extension I was, too. A couple of the dads were friendly, and one mom was especially kind, so kind that I disregarded [my general practitioner] Dr. Au’s advice and confided in her. Mostly, though, I remember the pain of exclusion. I felt constantly rebuffed. Each day, I forced myself to approach tables occupied by other parents, only to discover the seats were saved for someone else. I felt like weeping as I sat alone at meals. I was as insecure and unhappy as a pimply adolescent who had been transferred to a new high school.

Were the others afraid I would quote them? Were they angry I wouldn’t guarantee not to write about the trip? Had they noticed my twitching eye and feared I was an axe murderer? I was still splitting into two: the depressed person devastated by rejection and the professional observer who noted how far I had strayed from my usually confident self.

I noticed I had become hypersensitive to slights, or perceived slights. From one mother, I learned the hard way that depressed people attract bullies. On the first day of the trip, she asked if her son could borrow Sam’s hockey socks. Her son had forgotten to pack his and the coach was threatening to bench him for the uniform infraction. I so desperately wanted to make friends, I eagerly agreed—without even consulting my son. (I reasoned that, as Sam was a goalie, the coach wouldn’t notice if he wasn’t wearing regulation socks under his thigh-high leg pads. But still, I should have asked Sam.)

The woman must have sensed my neediness, my aura of hopelessness. When I later took a seat beside her on the bus, she scowled and made it clear she preferred that I sit elsewhere. On another occasion, when I set down my backpack on the seat beside her at a hockey arena, she frowned.

“Can you move that? It bothers me.”

My old self would have told her to move her ass because she bothered me. Instead, I obeyed. I silently picked up the offending bag, and put it on my lap. In doing so, I was overwhelmed with self-loathing. I had become so weak, so full of despair that I had the self-esteem of a tapeworm. I felt utterly worthless.

Mostly I shared a room with Sam. In Sandviken, where the boys were billeted with Swedish families, we parents were randomly paired off at the local hotel. I was pleased, thrilled actually, to discover I would be bunking with one of the more outgoing mothers. Perhaps through her I might break into the hockey-mom clique. But outside the hotel, as I was collecting my suitcase from the storage compartment beneath the bus, “It bothers me,” stopped me.

“I’m rooming with her,” she snapped, snatching the room key from my hand.

The old me would have snatched it right back. The new, damaged, vulnerable me accepted the bullying and tried not to burst into tears. Months later, I learned that both women were having marriage problems. Perhaps they wanted to room with each other for mutual support. In hindsight, I wonder if we were all too much on edge to see one another’s pain.

When I read this now, I seem unbelievably pathetic. Did the other parents actually ostracize me? Or did depression distort my view of reality? All I know is that the pain then was as real to me as if I had sliced my arm open with a knife.

In my despair, I glommed onto Sam, quite literally. Photos from the trip show me grinning at the camera—you can always grin, no matter how much you are dying inside—always holding onto Sam, leaning in toward him, gripping his arm. In one, I’ve got both arms clamped around his shoulder. How oppressive this must have felt to him. But I had suffered too many losses, and I couldn’t bear the thought of losing him, too. Whenever I couldn’t actually see him, at an airport or on the bus or on the street, I would panic and bellow his name as though he were three years old instead of thirteen.

“It was annoying,” he recalls now, carefully choosing the strongest word he knows that won’t make me cry. “You were always shouting, ‘Sam! Sam!’ It was so embarrassing.”

I can’t believe I did that to my son. I was never like that before. I let him use the stove and oven, supervised, of course, when he was only five. When he was eleven, I encouraged him to travel alone on Toronto’s far-flung subway system. But depression blinds you to others’ needs. It leaves you no emotional space to consider others, even those you love. You’re like a drowning person who can’t help clutching the next person, even a loved one, and dragging them down.

At the time, I didn’t get how humiliating it was for Sam. But he could see how awful things were for me. He would notice me eating by myself and be torn between consoling his shattered mother and hanging out with his new teammates. He compromised by sitting with me at breakfast when the other boys were still semi-comatose. Unfortunately I would pester him for company at lunch and supper, too.

Sam recalled, “I would always ask, ‘Can I please just eat with the team?’ ”

The last night of the trip, he wanted to play ping-pong in the hotel with the others. The healthy me would have encouraged him to bond with his teammates. His happiness would have made me happy. “No,” I said, stonily. By then I had given up trying to make friends with the other parents. I was furious with everyone. And I couldn’t stand being alone anymore.

“We have a long flight tomorrow,” I said, grasping at parental straws. “If you don’t get enough sleep, you’ll get sick. And school’s starting on Monday.”

“I can sleep on the flight. Please, can I hang out with everyone?”

And then things got ugly. I wept and raged. I called him selfish and ungrateful. I said I had paid thousands of dollars for the trip at a time when my sick pay had been stopped. (This wasn’t true; I had paid for the trip six months earlier.) But my pent-up anger at the way I’d been treated, or thought I’d been treated, erupted. I said I had wasted my time coming to Scandinavia because he had no time for me. I said he didn’t care about me. That night I sank to the lowest point of my entire illness. At thirteen, Sam was the mature adult in our relationship. Between sobs, he explained again and again, patiently, without ever once raising his voice, how desperately he was trying to be part of the team. I refused to relent. We cried ourselves to sleep, side by side, in narrow twin beds at a hotel near the Stockholm airport.

“I just wanted to hang out with them,” says Sam, two years later, still upset. “Even someone’s little sister, who was nine, was allowed to stay up.”

Out of the Blue: A Memoir of Workplace Depression, Recovery, Redemption and, Yes, Happiness ($22) is available in  bookstores and from Janwong.ca.