Performance of the month: When Bach meets breakdance 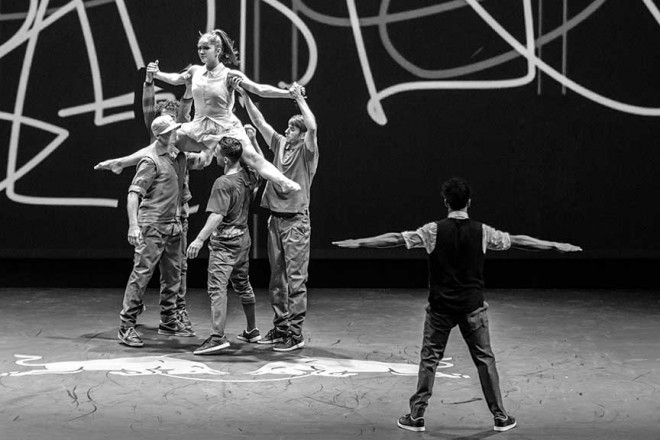 Like peanut butter and jam, Beyoncé and Jay-Z (we hope), some things just go together. But classical music and breakdance? Enter Red Bull Flying Bach, a breathtaking production where preludes and fugues are translated into head spins and freezes. Performed by world-champion dance crew the Flying Steps and set to Johann Sebastian Bach’s famous Well-Tempered Clavier, the culture-colliding show debuted in Berlin in 2010 and became a global sensation after sold-out performances around the world. Now on tour, with stops in 11 countries, they’re headed for Toronto (October 16–19) and Montreal (October 23–26).

At one of the troupe’s summer shows in Chicago, the lobby of the Civic Opera House felt more like a nightclub than a historic theatre. A DJ spun beats as people of all ages dressed in street duds lined up for Red Bull cocktails. “We’re exposing young people to classical music and showing the older generation that breakdancing is powerful and artful,” says b-boy Michael Rosemann (a.k.a. Mikel).

When conductor Christoph Hagel played the opening notes on a piano, contemporary dancer Anna Holmström moved gracefully across the stage. Then the theatre doors burst open and five b-boys marched down the aisles, sporting sideways ball caps. As they leaped onto the stage, electro rhythms and the squeaking of sneakers accompanied the classical notes. During the hour-long show, dancers spun on their heads and flipped across the stage as the audience gasped and cheered. “I’ve always danced to hip hop music,” says Mikel. “But I’ve been dancing to classical for four years now, and it feels like home.”