Plus the finale of ‘Euphoria’ and Season 2 of the hit show ‘Succession.' 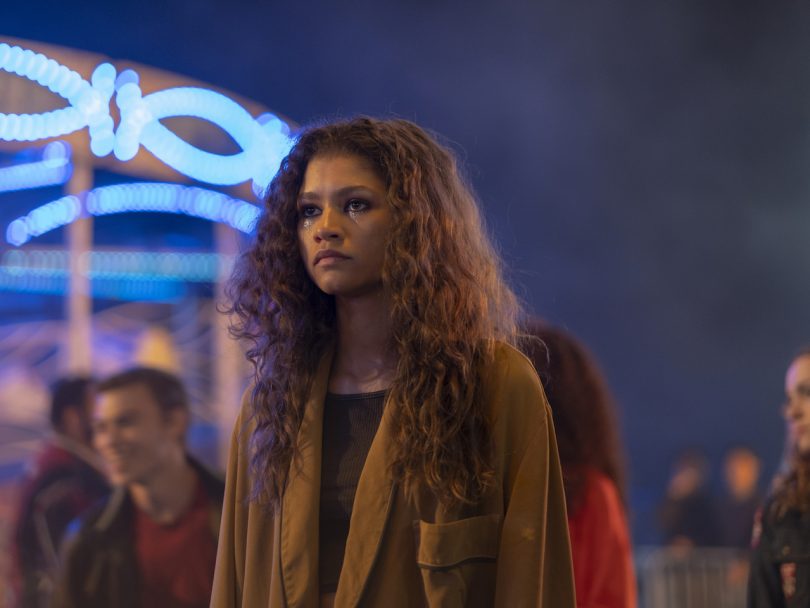 Ah, Crave: an expanding catalogue of fantastic TV shows, movies and Canada’s gateway to the beautiful world of HBO. The last episode of Euphoria just dropped, so add that to your to-watch list immediately. But August is bringing all kinds of titles, HBO and non-HBO alike, to the streaming service. Want to binge-watch something ridiculous with an oversized glass of wine? Love Island has your back. Want to get fired up (but also deeply sad) about how close we are to the end of the world as we know it? The Handmaid’s Tale has new episodes. Want to laugh your ass off? A Black Lady Sketch Show is premiering. Or maybe you just want to see Michael B. Jordan’s killer abs? Catch them in Creed II. Whatever you’re feeling, there’s something worth your while on Crave in August.

What’s new on Crave on August 1

What’s new on Crave on August 2

Nicole Kidman, Russell Crowe, Joel Edgerton and Lucas Hedges star in this 2018 drama based on the memoir of a man forced into a gay conversion program by his Baptist parents. The performances garnered amazing reviews across the board, especially for Hedges and Crowe, with critic Tomris Laffly calling the entire movie “emotionally arresting.”  Keep an eye out for Troye Sivan in a supporting role.

The House with a Clock in Its Walls

So I Married an Axe Murderer *

Die Hard: With a Vengeance *

What’s new on Crave on August 3

If Issa Rae is involved, count us in. Every half-hour episode of this new show, co-executive produced by Rae and Robin Thede, contains sketches by soon-to-be superstars Thede, Quinta Brunson (who you may recognize from her viral Buzzfeed vids), Ashley Nicole Black and Gabrielle Dennis. You can also expect lots of celeb guests like Lena Waithe and Laverne Cox. “I created A Black Lady Sketch Show because I love how many insanely funny Black women are grinding in these comedy streets,” reads an old tweet from Thede. “It’s time the WORLD recognizes.”

Based on the hit U.K. reality show, the American version of Love Island is like a less polished version of Bachelor in Paradise. Basically, a bunch of hot people are put on an island, immediately coupled up based on first impressions and let loose in a giant beach house. The goal: find a partner or get sent packing. If Paradise isn’t chaotic enough for you (or if the producers pulling strings gets too annoying), this is it.

What’s new on Crave on August 4

Euphoria might be the buzziest show of the year. Adapted from an Israeli show of the same name, this HBO show is executive produced by Drake and Tmera Yardeni and stars Zendaya as 17-year-old struggling addict Rue. We follow Rue and a line-up of other troubled high-schoolers as they attempt to figure out themselves and their futures in the midst of drug-fuelled parties, social media and difficult daily lives. Be warned: this show is pretty explicit and definitely isn’t for the faint of heart.

What’s new on Crave on August 5

What’s new on Crave on August 6

What’s new on Crave on August 7

ICYMI, The Beaverton is basically the Canadian version of satirical news juggernaut The Onion. Their weekly “fake news” show takes real-life events, politics and culture, transforming them into fictional stories that offer hilarious, insightful commentary on Canada and the world. We’re legitimately obsessed with this clip of our forever bae Simu Liu being interviewed on the importance of representation—but not the kind you’re thinking of—in Hollywood. If you find you’re constantly watching late night shows all about American politics (*cough* every late night show ever *cough*), this might be the solution.

What’s new on Crave on August 8

Look no further for your August (Canadian-made!) rom com fix. Twenty-eight-year-old Maya struggles with her dad, who wants her to run the family store. Harbouring more artistic ambitions, she travels to Cape Town against his wishes in search for inspiration. She then promptly gets engaged, also against his wishes. But when she catches her new fiancé, Mtumbie, cheating on her and calls off the wedding, she can’t bring herself to tell her family. Enter: Malcolm, a charming Canadian who agrees to pose as Mtumbie. You can guess what happens next. The movie hasn’t gotten great reviews, but what the critics do seem to agree on is the outstanding performance of Toronto’s own Shamier Anderson as Malcolm.

What’s new on Crave on August 9

HOT PICK: Can You Ever Forgive Me?

Finding herself in deep financial trouble, former best-selling celebrity biographer Lee Israel turns to forging letters from famous literary figures, getting caught up in a web of dangerous lies in the process. Melissa McCarthy finally stars in “the dramatic role she deserves” as the grouchy, real-life con artist Israel, whom The New York Times calls possibly the “single most interesting movie character you will encounter this year.” The movie’s Oscar-nominated, to boot. And there’s a cat in it!

The Stand-up Show with Katherine Ryan

Blast From the Past *

Deliver Us from Evil *

What’s new on Crave on August 10

Julio Torres, SNL‘s coolest and weirdest writer, wants to show you his favourite shapes. These include but are not limited to “a plexiglass square, a triangle, an oval that wishes he were a circle, a self-conscious cactus,” and a Ferrero Rocher chocolate that Julio is mad at “because she left her little skirt at home.” If you’re looking for fresh, bizarre comedy, this is gonna be your jam. As GQ puts it, Torres “has an acute ability to draw out the hilarity of the seemingly banal.” And we all kind of need that right now, don’t we?

What’s new on Crave on August 11

The Roy family runs a massive media conglomerate, but as their aging patriarch’s health declines, his four kids are left to grapple for power and keep control of their empire. The Guardian gave Succession five stars and called it a “brilliant dissection of a dysfunctional dynasty. The Globe and Mail acknowledges the premise sounds boring but that it “needs to be watched to be believed” because “10 hours later, you shall be converted.” Despite the hype around how funny it is, it’s also been nominated for an Outstanding Drama Series Emmy, so…worth a watch.

What’s new on Crave on August 12

In 2014, a teenage Palestinian named Muhammed Abu Khdeir was kidnapped and murdered by Israelis following the murders of three Israeli teens. These deaths are considered to have led to the 2014 Israeli-Gaza war. Our Boys is a ten-part series telling the stories of those involved in Khdeir’s murder—Jews and Arabs alike—and how their lives were forever changed. The show is notable because it was filmed in Israel and was created by two Israelis and one Palestinian, with the Times of Israel noting that the makeup of this U.S. primetime series makes it “an unprecedented achievement.”

What’s new on Crave on August 13

What’s new on Crave on August 14

What’s new on Crave on August 15

What’s new on Crave on August 16

The premise of this movie is pretty cool. Gina Rodriguez stars as Gloria Fuentes, an American makeup artist whose friend is kidnapped on vacation in Mexico. In response, Gloria trains to take down the Mexican drug cartel responsible. Apparently, this version isn’t as good as the Spanish version it’s based on, but since it’s a feminist re-hashing of the story and was directed by a woman, we’re here to support.

The Jim Jeffries Show, Season 3A

Life As We Know It *

What’s new on Crave on August 17

What’s new on Crave on August 18

In Danny McBride’s new comedic brainchild, the Gemstone family are famous televangelists who live on a compound, own a megachurch and are filthy rich, draining their congregation for every cent they can. But cracks are starting to form. Their leader begins to question their mission, his daughter secretly hopes to escape the compound and his oldest son is confronted by the sins of his past. McBride describes The Righteous Gemstones as a takedown of hypocrites, not of religion. And don’t let the religious element fool you—this show isn’t afraid of anything (read: dicks, and lots of them).

What’s new on Crave on August 19

What’s new on Crave on August 20

What’s new on Crave on August 21

What’s new on Crave on August 22

What’s new on Crave on August 23

I Am Patrick Swayze

What’s new on Crave on August 24

What’s new on Crave on August 25

Executive produced by George Clooney and starring Kirsten Dunst, On Becoming a God in Central Florida is a dark comedy series about Krystal’s (Dunst) relentless pursuit of the American Dream. Though her family was ruined by Founders American Merchandise (FAM), a cultish pyramid scheme, she cons her way up its ladder in the hopes of a better life. Since it hasn’t premiered, the word’s still out on whether it’s good, but this series is shaping up to be a pretty interesting look at a woman’s attempt to make it on her own in a world that’s beating her down.

What’s new on Crave on August 26

What’s new on Crave on August 27

The Bold and the Beautiful, Season 33, episodes 1–3

What’s new on Crave on August 28

What’s new on Crave on August 30

How to Train Your Dragon: The Hidden World

Nancy Drew and the Hidden Staircase

The Adventures of Super Mario Bros. 3

Viceland’s cooking competition tests chefs with little to no experience cooking with cannabis to see if they can include it in their food. Besides main hosts B. Real, Vanessa Lavorato and Miguel Trinidad, you can expect lots of stoner guest judges, including Wiz Khalifa. This is the biggest (and possibly the only) international cannabis cooking show, and the hosts told Forbes they hope it can help end the stigma around weed and let people know there are lots of ways to consume it. Bonus: it’ll teach you how to infuse your meals with the right dosage.

*Only available as part of the STARZ add-on to Crave