Can You Spot The 5 Photoshop Quirks On The Cover Of Vanity Fair’s Hollywood Issue?

Extra leg plus extra hand minus one alleged sexual predator equals a feast for the eyes.

I don’t know about you, but every time I hear shouts of yet another Photoshop fail, my Twitter-wracked brain starts its familiar whirl: Which gorgeous, curvy model have they robbed of her rightful waistline this time? Which gorgeous celebrity have they whitewashed this time? And perhaps most importantly: Just how hard is Photoshop, anyway?

Somehow, the cover of Vanity Fair’s much-anticipated 2018 Hollywood Issue — shot by noted wind-machine fan and VF stalwart Annie Leibowitz and peppered with all the usual hot Hollywood subjects (plus Wonder Woman) — manages to have not one but several interesting editing quirks. Let’s review which ones Internet users have already plotzed over — and highlight a couple headscratchers of our own.

Sitting front and centre, sidled up next to the always regal Oprah, Witherspoon can be seen daintily crossing her two legs, while her third leg is tucked demurely away under her beaded gold gown—wait, what? How did we not notice that when she was hiking her way through Wild? Well, Twitter quickly pointed it out:

Imagine the millions of dollars that have been spent digitally removing Reese Witherspoon's third leg from films and TV shows over the years. pic.twitter.com/mawsX6WLZ9

The mag responded to the gaffe on Twitter, noting that what was mistaken for Hollywood’s best-hidden medical miracle was merely the coincidentally leg-coloured lining of Witherspoon’s dress. (K, sure.) For her part, the Big Little Lies star was good-natured about the whole mix-up.

How dare they defile the angel-crafted frame of Queen Oprah! Not saying she couldn’t use the extra digits given all the project-juggling she does, but man, this operation is pure chaos. And yet, because she is magnanimous and full of God’s radiant light, Oprah chose to forgive VF’s extra appendage by laughing along with her Wrinkle in Time costar (and fellow Barbie): 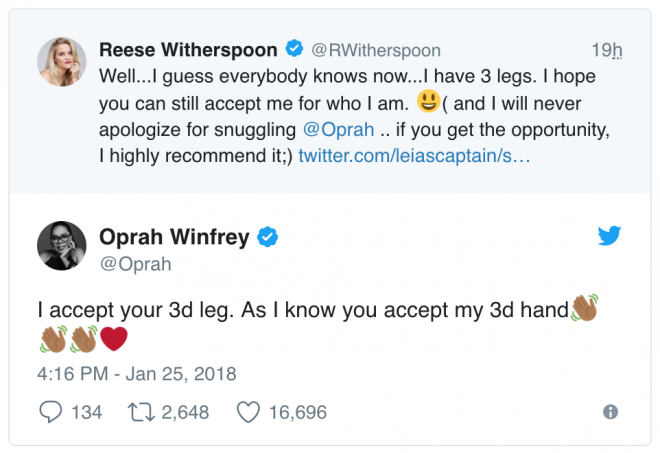 If you’re saying “where,” it’s not because The Disaster Artist lead is a better illusionist than that sneaky bastard Waldo — he’s just been cropped out. Franco, who recently accepted a Golden Globe while wearing a Time’s Up pin, was digitally edited off the cover by VF editors once they “learned of the misconduct allegations against him.” (Franco has been accused of sexual misconduct by five women.) So basically Vanity Fair’s editorial policy is: “Please leave, creeps. Extra hands: you can stay!”

Are you all right, Claire Foy? You appear to have fallen, albeit into a surprisingly graceful position. (Props to all that Crown training.) Is her blood sugar okay? Someone help Claire Foy!

Okay, he’s not there, but, first of all, if VF editor Graydon Carter is included in the celebrity corral, why isn’t Captain von Trapp? Secondly, we hear he’s a great understudy.