Sia’s genius Grammys move – and what's so wrong about it

In order to protect her anonymity, Sia thrust a 12-year-old girl in a nude leotard into the spotlight. Ironic at very best. 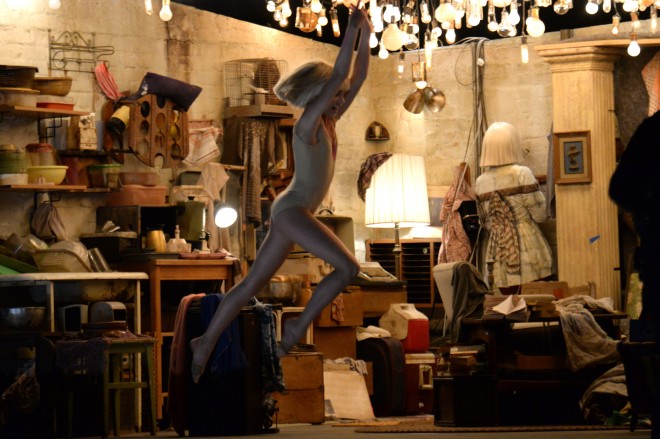 Somewhere between Sam Smith accepting yet another Grammy and Beck doing the same, something fascinating happened on Sunday night: Sia pulled off the most memorable performance of the evening without even showing her face.

Ever since the elusive singer announced she’d appear at the Grammy Awards, everyone wanted to know: how will someone who doesn’t appear in her own music videos possibly deliver a performance on an international stage? Here’s how: For each perfect, eerie note of Chandelier, Sia stood with her back to the cameras, turning the stage over to two people you never expected to see dancing together, and yet couldn’t stop watching once you’d started: actress Kristen Wiig and Maddie Ziegler, the talented 12-year-old who starred in the singer’s last two music videos. Both dancers wore Sia’s trademark blond bob—one way to hide on the biggest night in music is among a multitude of decoys.

Sia didn’t win any 0f the four Grammys she was up for on Sunday night, but that doesn’t change the fact that her hot-and-cold music career is now decidedly on fire. Ironically, now that she’s bigger than ever, we’re less likely to see her face. Shortly before the release of 2014’s 1000 Forms of Fear, Sia started hiding from the cameras.

It’s a move that would stump a Kardashian. That’s what makes it so revolutionary.

At 39, Sia has found a way to put her voice first, and say “no” to the criticism that would inevitably befall her as a pop star who dares to age. She can be seen as the most extreme example so far of a quietly growing rebellion against the red-carpet aspect of fame. At last year’s Screen Actors Guild Awards, Elisabeth Moss flipped E!’s Mani Cam the bird – twice — and when a camera operator surveyed the length of Cate Blanchett’s dress, she bent down to his level and demanded to know, “Do you do that to the guys?”

There’s a sense in our culture that we have a fundamental right to consume our female celebrities. So it comes as little surprise that while no one seems to have a problem with Daft Punk wearing robot masks on stage, Sia’s back-to-the-camera policy has been widely derided. Critics have called on her to show her face, dismissing her tactic as a publicity stunt, and arguing it’s pointless anyway because it’s easy to find pictures of her face from earlier in her career.

The cries of “faker!” against Sia tend to ignore the path that led to her decision: addiction to drugs and alcohol, suicidal thoughts, and rehab. In October 2013, she penned an anti-fame manifesto for Billboard, appearing on the cover with a paper bag over her head. “If anyone besides famous people knew what it was like to be a famous person, they would never want to be famous,” she wrote.

Sia is hardly the first pop star to feel conflicted about fame. But she’s one of the few to find a solution that works for her. In recent interviews, she’s sounded almost giddy as she recounts how much her life has improved. “I was at Target the other day buying a hose and nobody recognized me, and my song was on the radio,” she told Nightline, when Chandelier was at the top of the charts. “And I thought, okay, this experiment is working.”

But there is a problem with Sia’s new MO. It’s that in order to protect her anonymity, she has thrust a 12-year-old girl in a nude leotard into the spotlight. At best, it’s ironic. At worst, it’s hypocritical.

Sia spotted the immensely talented Maddie Ziegler on the Lifetime reality series Dance Moms and over the past year, has turned her into an on-stage mini-me. It started with the video for Chandelier, and Maddie now joins Sia for most live performances. The young girl is the reason Sia’s sets are still captivating, even though the singer won’t make eye contact (and in the case of her music videos, won’t appear at all).

Sia couldn’t handle fame in her late 30s; why does she think Maddie will be able to as a pre-teen? This is a girl who, from the time she was eight, has had the private highs and lows of her dancing career exposed to a national audience: from the rehearsals to the competitions to the tears.

As a dancer, Maddie merits the attention and the accolades. As a child, she isn’t yet capable of deciding if worldwide fame is what she wants. But Sia has catapulted her there, making the past year of Maddie’s life a blur of TV and awards show appearances that included trying to teach Jimmy Kimmel her famous Chandelier dance. At the Grammys, Sia and Maddie walked the red carpet together in matching outfits. Only, Sia’s white wig was big enough to conceal her face.

Their partnership ignited controversy last fall with the video for Elastic Heart. In it, Maddie performs alongside 28-year-old actor Shia LaBeouf, in a routine that shows the two of them dance-fighting in a cage, smudged with dirt.

While Sia stands by the artistic merits of the video, she did acknowledge and apologize for any hint of pedophilia. ”All I can say is Maddie and Shia are two of the only actors I felt could play these two warring ‘Sia’ self states,” she wrote on Twitter.

It’s not weird to wish for privacy. But it is weird to insist that a young girl is the right person to hold your place. It muddies what is otherwise the most interesting thing happening on the red carpet today: a woman rewriting the rules of the game.

The piece was originally published on Macleans.ca.