In Shrill, Aidy Bryant is an inspiration to every woman who has been fat-shamed. 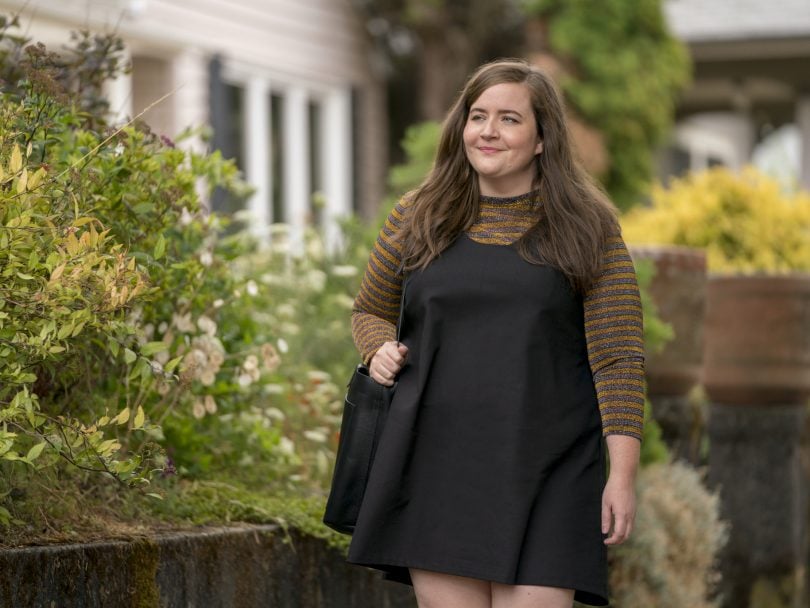 One of the first things women are ever taught about their bodies is that being fat is one of the worst things you can be. We’ve been made to believe that fat bodies are lazy, sloppy, unhealthy, unlovable and weak. We’ve been taught that fatness is shameful—a failure.

Embracing your body and untapped power while fighting back against trolls and fat-shamers (including your own inner critic) is the premise of the extraordinary new series Shrill. Based on the book of the same name by Lindy West, it’s streaming on Crave and stars Aidy Bryant (of Saturday Night Live). There’s a memorable scene in the fourth episode where Bryant’s character, a self-conscious, budding journalist named Annie Easton, arrives at a body-positive pool party clad in dark jeans and a nondescript button-down shirt. She shyly nibbles on watermelon while other women indulge in the chocolate fountain. Old habits die hard.

When I was growing up, there were only two ways bodies like mine and Bryant’s were portrayed on television. One was the “Before” picture in commercials for weight loss programs. The other was a punchline.

The ’90s were a lousy time to be a fat teenager. I grew sizeable breasts and a belly to match during the height of heroin chic. The boys I had crushes on had crushes on Kate Moss. They plastered their lockers with Calvin Klein ads featuring graceful protrusions of clavicles and hip bones.

I hid my decidedly un-waiflike body in oversized band t-shirts, plaid flannel button-downs and men’s jeans from Mark’s Work Warehouse. After the grunge era passed and I headed to university, I continued to hide behind overalls, cargo pants and safely shapeless hoodies. In my mid-twenties, I discovered the 1950s pin-up girl aesthetic. Bold, sexy and hyperfeminine—I felt like I wasn’t hiding anymore and had made peace with my body. I was wrong. I was still hiding in the voluminous fit-and-flare dresses that camouflaged my hips, thighs and butt. Despite showing off more of my body, I continued to use clothing as armour—a means of concealing all that I didn’t love about myself.

But it’s nearly impossible to hide your body during swimsuit season. As any fat kid will tell you, bathing suits were often worn under oversized t-shirts in the pool—ostensibly a guard against sunburn, but we all knew the truth and they didn’t hide much once they got wet. And as any fat adult will tell you, the act of shopping for a bathing suit can be an exercise in humiliation.

That’s why episode four of Shrill felt as refreshing as swan diving into a cool pool on the hottest of days. Met with the glorious technicolour vision of bikini-clad bodies that look like hers—round bellies, jiggly thighs and all—Annie eventually sheds her clothing cocoon to happily splash and swim with all the other confident babes. It’s a metaphor for jettisoning narrow beauty standards, shame, self-consciousness and other assorted bullshit and just enjoying your goddamned life.

Zero fat jokes. Zero judgement. Just fat bodies like mine in swimsuits and bikinis being happy and attractive and just existing. It was, quite frankly, a revolutionary moment in television. And it brought tears to my eyes.

That scene serves as a solid reminder that our bodies—all bodies—are amazing. They do not require anyone else’s stamp of approval. Whether we’re a size 2 or a size 42, our bodies belong to us. Nobody else gets to dictate how we feel about them.

If you haven’t yet joined the party, it’s time to unbutton, unzip and jump right into living life the way you’ve been waiting to live it. I promise you—the water’s perfect. It always was.