Should you watch the Fifty Shades of Grey movie?

Two very different takes on the month's steamiest release in our she said, she said review.

It’s the cinematic moment we’ve all been waiting for—well, at least two of us at Chatelaine have been waiting for it. The Fifty Shades of Grey movie is now in theatres, and we took it upon ourselves to cut out of the office and catch a Friday matinee screening so we could answer your burning Fifty Shades question: Should I see this film? Two very different responses in our she said, she said review below. 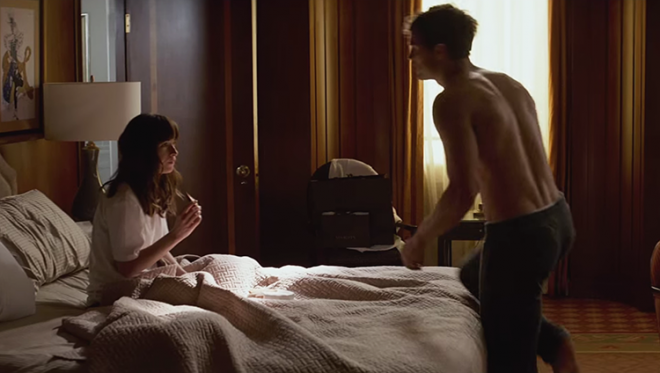 In the end, it was my attention span that took the hardest beating during Fifty Shades of Grey. This movie is, almost to a minute, cripplingly dull. That’s not a surprise: The book isn’t much interested in conventions like “plot” or “dialogue that doesn’t make you physically ill,” and it doesn’t need to be, because not a single one of the 100 million worldwide readers opened that book for its literary merit. We were in it for the racy bits! And—very likely—skipped straight past everything that wasn’t the racy bits! In the lead up to the release of this film, people wondered if titillated viewers would favour the privacy of their own homes over the public theatre. You should. You should emphatically do that. But only because you’ll have the advantage of a fast-forward button.

So let’s get to those racy bits. For all its flirtation with BDSM, Fifty Shades struck me as an enormously traditional book. There’s the obvious stuff about how a moody man can be saved by the tender love of a good woman (Edward Rochester had an attic wife long before Christian Grey had a Red Room of Pain). But there’s nothing transgressive at all about that Red Room. It’s not where Christian enjoys his sexual predilection—it’s where he performs his sexual pathology. What did feel new—or at least newer—was Fifty Shades’ insistence on female pleasure. In that Red Room and outside it, Ana always comes first. So it’s curious that, on screen, we never actually see Ana have an orgasm. And while Jamie Dornan’s abs (and arse) get trotted out a decent amount, most of director Sam Taylor-Johnson’s camera is trained firmly on Dakota Johnson’s body, which doesn’t feel especially transgressive, either.

In fact, if you’re looking for the female gaze, you’ll have to search the small screen. There, quality shows like (among others) The Americans, Outlander, The Mindy Project, Masters of Sex, The Fall (starring a much better, and bearded, Dornan), Orphan Black and How to Get Away with Murder all feature strong, sexually unapologetic women, as well as plenty of shirtless men. You can watch these shows in the privacy of your own home right now! And you won’t even need that fast-forward button.

Danielle’s rating: 3 handcuffs out of 10.

Let’s get something out of the way: Fifty Shades of Grey is not a good movie. But you knew that already. It’s not supposed to be good. It’s supposed to be hot: full of whips and chains and Red Rooms of Pain—and Jamie Dornan, a man who knows how to not wear a shirt. And boy can he unbutton. That’s enough to get me and maybe you—c’mon, admit it—to the theatre. Despite the fact that the source material is as deep as a wading pool and that Dornan is 75 percent sexier when not talking (seriously, your cable company’s automated voice is steamier than his), the Fifty Shades movie is worth a $13 ticket and bag of popcorn.

This is your standard love story, although one with an R-rating, a few leather props and a killer slow-jam version of Crazy in Love. Thankfully, director Sam Taylor-Johnson did away with the most cringe-worthy bits of the book—the Inner Goddess, all but one “holy crap” and the abundant references to Icarus flying to close to the sun—and sprinkled on just the right amount of cheese, including a romantic dance to Sinatra and some well-timed lip-biting. Another treat: Jennifer Ehle, who you know as Elizabeth Bennett to Colin Firth’s Mr. Darcy, is deliciously cast as Anastasia’s free-spirit mother.

The film’s triumph, though, is Anastasia Steele herself, who’s played with extraordinary charisma by Dakota Johnson (hand this woman an award, STAT). Johnson’s Anastasia is the kind of girl you wouldn’t mind having a cocktail with. She wears army boots and Black Keys tees and has stylishly mussed-up hair. She negotiates the terms of her contract with Christian like a boss, pokes fun at his over-the-top behaviour and is very much in control of their relationship. Johnson out-performs Dornan in every scene, which you think would be horrific but is actually a joy to watch. So, no, the movie’s not good in the traditional sense of the word, but who’s interested in tradition, anyway?