A bandwagon jumper's guide to the Emmy-nominated (and award-winning!) Canadian TV series. 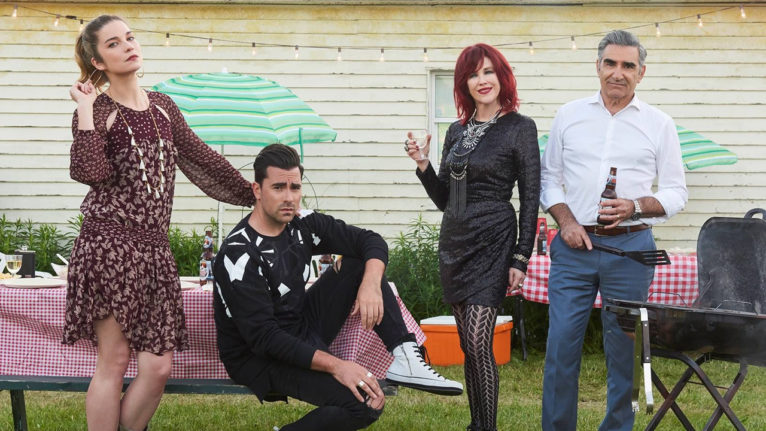 Well, Moira finally got her Emmy! Or at least Catherine O’Hara, the iconic Canadian comedic actor who portrays Moira Rose on Schitt’s Creek, did. After six seasons, the hit CBC series took home nine awards at the September 20 virtual Emmy Awards (including Best Actor, Actress, Supporting Actor and Supporting Actress in a comedy). And if you haven’t already watched the show and fallen in love with the Rose family and the town of Schitt’s Creek (a character in itself), the award show buzz and numerous accolades probably mean that you’re going to now. And, honestly, welcome to the best TV you’ll ever watch.

Before you dive in, here’s a guide to the little show that could. Everything you need to know about Schitt’s Creek, for those who are a little late to the party.

The show follows the ups-and-downs of the Rose family—a formerly rich and out-of-touch clan who are forced to relocate to the middle-of-nowhere town of Schitt’s Creek after losing their fortune when they’re defrauded by their longtime business manager. The family—which includes video store mogul Johnny Rose, his former actor wife Moira Rose, and two children, Alexis and David (a party girl and art gallery owner/curator of funky black and white sweaters, respectively)—had purchased the small town as a joke years earlier, but end up living in its only motel after the town becomes their only remaining asset. Hijinks ensue as they attempt to (at first) get their money back and get out of town, and in later seasons adapt and become a part of the community.

Who are the Rose family members in Schitt’s Creek?

If one were ranking the Rose family on a scale of neutral to chaotic, they’d all be *firmly* in the chaotic category—in the absolute best way. The family is comprised of patriarch Johnny Rose (played by Eugene Levy)—a former video store tycoon who eventually manages Schitt’s Creek’s motel and is known for his penchant for three-piece suits and his iconic bushy brows; Moira Rose (played by Catherine O’Hara)—the mama bear of the family and a former soap opera star who’s always waiting on her next big break. O’Hara’s Moira is known for her honestly one-of-a-kind accent (O’Hara told Newsweek of Moira’s accent: “It’s almost like she wants to sound somewhere between Marilyn Monroe and Audrey Hepburn”) and her massive wig collection; eldest child David Rose (played by writer and series creator Daniel Levy), a lover of all things luxury, who later becomes a small business owner in Schitt’s Creek; and younger sister Alexis Rose (played by Annie Murphy), a socialite with a wild past who is—at the beginning of the series—best known for “casually seeing Prince Harry” and being described by Us Weekly as “up for anything.”

In the words of Moira Rose: “This wine is awful. Get me another glass.”

Additional characters of note are: Roland Schitt, the mayor of Schitt’s Creek and his wife, Jocelyn, who become friends with the Roses (albeit begrudgingly so at first); Twyla Sands (played by Dan’s IRL sister Sarah Levy), a server at Cafe Tropical and Alexis’s friend; Patrick Brewer, David’s business and life partner; Stevie Budd, David’s BFF and co-owner of The Rosebud Motel; and Ted Mullens, the town vet and Alexis’s longtime BF.

Where was Schitt’s Creek filmed?

Because this series is *peak* Canadian content, Schitt’s Creek was filmed in the heart of smalltown Ontario, specifically Goodwood, Ont. North of Toronto, with a population of only 663 (can you believe this Schitt?!), the small town was turned into Schitt’s Creek, USA from 2015 until filming wrapped in 2019, serving as the background for some key locations including Bob’s Garage, Rose Apothecary general store and Cafe Tropical diner. (Fun fact: many of these landmarks are actually located right across from each other in one intersection of the town.)

Where can I watch Schitt’s Creek?

Because the powers that be *truly* love us, seasons 1 to 5 of Schitt’s Creek can be streamed on Netflix Canada. In addition, all six seasons of the series can be streamed on Amazon Prime. For Canadians, the entire show can be streamed for free on CBC Gem (also the home of our other quarantine fave, Normal People).

How many Emmys has Schitt’s Creek won?

While the show was nominated for four Emmys in 2019, 2020 was truly the Schitt for the show, its creators and fans. During the September 20 broadcast, Schitt’s Creek swept the comedy category, setting the record for most wins in a single season for a comedy show, taking home nine of the 15 awards it was nominated for!

When does Schitt’s Creek get good?

While the show is a runaway success now, as many people (including Dan Levy) pointed out online during the awards show, that wasn’t always the case. For many viewers, the series got off to a slow start, with many now-fans initially abandoning it before giving it another try and falling head-over-heels.

“Schitt’s Creek is a triumph of television and I HATED it so much in the first few episodes—why should I care about these white people—that it took me two years between starting it to go back and finish it,” editor Imani Gandy tweeted. “If you’re stuck on season 1, push through. I promise you it’s worth it.”

Schitt's Creek is a triumph of television and I HATED it so much in the first few episodes—why should I care about these white people—that it took me two years between starting it to go back and finish it.

If you're stuck on season 1, push through. I promise you it's worth it.

Series creator and writer Levy even noted following the awards show, that the show—if not given the space to grow—would have been “yanked off the air in Season 1 for ‘underperforming’.”

A gentle reminder that TV shows need time and space to lay foundation, to develop, and to grow. In the wrong hands, this show would have been yanked off the air in Season 1 for “underperforming”. Thank you @cbc @PopTV for letting us fly. https://t.co/Ygwrmuzjbs

Which is all to say that if you’re just getting into the show now—give it a chance. Specifically, give it until at least episode 6 of season 1, “Wine and Roses.” In this episode, Moira becomes a spokesperson for Herb Ertlinger Fruit Wines, a hard to pronounce local wine that also incredibly difficult for the main characters to digest. The episode gives us true gems like Moira’s commercial sign off: “You’ll remember the experience and you’ll remember the name: Herb Erfling ger. Burt Herngeif. Irv Herb-blinger. Bing Livehaanger. Liveling. Burt Herkurn. Ban-Bingo ling-fucker!”

And, honestly, watching the entire series is worth it for *so* many reasons; but if you only need one, it’s to get to episode 6 of season 4, “Open Mic,” when Patrick romantically serenades David with an acoustic version of Tina Turner’s “Simply the Best.” It’s one of the most romantic TV moments of all time, and will never let you hear that song the same.

If you make it through this episode without ugly crying, you’re truly a monster.

If you’re going to go into a binge-watching session of Schitt’s Creek with *any* knowledge, it has to be of one of the series’ most iconic lines: “Ew, David!” Uttered by true icon of over-pronouncing words, Alexis Rose, this catchphrase is used by Alexis whenever David does anything she doesn’t approve of…which is pretty much everything.

What does the show have to do with Mariah Carey’s “Always Be My Baby”?

While Patrick’s performance of Tina Turner’s “Simply the Best” immediately made the song synonymous with the show, another well-known song that’s become a classic of Schitt’s Creek is Mariah Carey’s “Always Be My Baby.” As Out magazine notes, it’s not *exactly* clear when fans realized that Levy’s David was obsessed with the songstress—but he was. (And so is Levy himself, it appears). This all culminated in the finale of the series when *SPOILER ALERT* Patrick sang the iconic song to David during their wedding.

And it appears the love is *very* mutual. As part of the Dear Class of 2020 online commencement events for graduating students amidst COVID-19, Carey teamed up with the cast of Schitt’s Creek (in character, of course) for a rendition of her hit “Hero.”

Carey even tweeted a big congrats to Levy on his Emmy wins!

Also, why does Moira Rose wear wigs in Schitt’s Creek?

Honestly, we don’t know, but we LOVE it.

Aside from “Ew, David!” the most iconic part of the series has to be Moira Rose and her over-the-top sense of fashion that involves a rotating and enormous collection of wigs. It’s rare to see Moira without one of her wigs, the only real remaining luxury from her days as a wealthy woman.

They get her through the tough moments:

And the truly unhinged moments:

And we wouldn’t have it any other way.

Why is Schitt’s Creek so popular?

Because it’s amazing, duh! But actually, because not only is the show incredibly well-written, directed and acted (as exemplified by the recent Emmys sweep), but it’s also incredibly meaningful, especially for members of the LGBTQ community. From the moment that Levy’s David first talked about his pansexuality in season 1 (using his love for different wines as a metaphor), viewers knew the show was going to be different. As FLARE writer JP Larocque wrote in an April 2020 article about the end of the show: “Dan Levy’s David Rose is noteworthy entirely because he isn’t—a queer character granted the permission to be himself without the typical burdens of representation for the sake of checking a box. And in a world where so much is the source of humour, his sexuality is never a punchline.”

For many queer Canadians, the show became an example of how the world at large could—and should—be. As HuffPost noted in a January 27 article about the show’s lasting legacy for representation, for queer viewers watching same-sex relationships blossom on shows is great, but also often comes with anxiety. “Too often, LGBTQ2 representations in pop culture either end in tragedy or farce, and parents (if not absent altogether) fail to affirm their kids’ gender identity or sexual orientation,” the article notes. Viewers were primed to worry whether David’s pansexuality will be accepted, whether Patrick’s parents would disown him, or whether their relationship would ultimately fail, because that’s the typical fate of LGBTQ characters in mainstream media (see: Elite, Degrassi and pretty much any other show with queer characters). But thankfully, that’s not the case, with Schitt’s Creek.

Instead, Patrick and David’s relationship is given the respect and room to thrive that it deserves. And with Moira running around town in a wig that resembles something worn in the French court of Marie Antoinette, David’s sexuality is the *least*exceptional thing about the Rose family.