Divorce follows a middle-aged couple in a painfully long and nasty process of trying to uncouple. 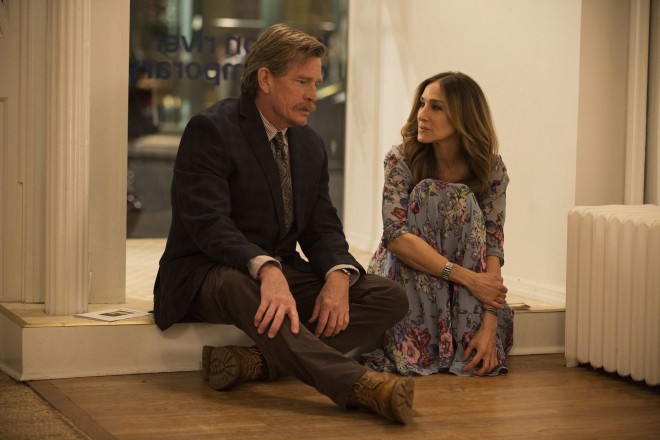 Watching the pilot of the new HBO comedy-drama Divorce, premiering Oct. 9, feels like being trapped inside a marriage counsellor’s office with bitter couples who’ve been marinating in red wine and resentment for way too long.

In the first five minutes, a nasty husband publicly shames his 40-something wife for not having kids in her youth. She retaliates by drunkenly shooting him with a gun, sending him into a coma. Another wife, who’s been unfaithful to her moustachioed dolt of a husband, bluntly informs him she wants out of their marriage while she can still salvage a shred of happiness. He responds by vomiting several times at her feet.

The show establishes its ethos with ruthless efficiency: Marriage at mid-life is suffering.

Sharon Horgan, the wonderfully sharp co-creator of another, less scathing marriage sitcom, Catastrophe, made the show with Sarah Jessica Parker as executive producer and star, and it’s hard not draw an evolutionary line between Parker’s last HBO series, Sex and the City, and this one.

SATC was an aspirational fantasy for single twenty- and thirty-something women who could project their fears and excitement about the future onto four women full of questions: Will I ever meet someone? Will I have kids? What will settling down look like? Divorce is a grim portrait of what happens when all those questions are answered.

Parker’s character, Frances, is a well-dressed New York art gallerist whose husband Robert, played by Thomas Haden Church, has moved her and their two kids to a small town outside New York City, so he can start his own contracting business.

Though France’s hair is straighter, her squeal less adorable, her movements less frenetic and more exhausted than Carrie’s, her voice is pure sex columnist narrator when she asks Robert, rhetorically, “How do you go from eight years of happy marriage to wanting to blow your head off?”

Related: Why we need to to embrace the happy divorce

It’s as though Carrie got married, had kids, moved to the suburbs and, wizened from the drudgery of picket-fence living, is desperately seeking a way out.

But Frances’s quest for freedom backfires, and she finds herself stuck in an awkward and unconscious uncoupling that escalates in viscousness with each episode. (The ensuing one-upmanship will no doubt provide a perverse kind of wish fulfillment to anyone who has navigated a divorce.)

Horgan and Parker position the show as a more “real” look at a relationship, and the complicated ways love morphs over time — one of many modern portrayals of marriage in pop culture to puncture the happily-ever-after bubble. (Togetherness and Married are two other bleak prestige sitcoms about the grind of modern coupledom that were recently cancelled, perhaps because they were a little too real.)

Twelve years after Carrie finally found her happy ending (with Big on a bridge in Paris), TV has changed drastically. The glossy, unattainable fantasies of pre-recessionary sitcoms like Friends and SATC no longer play with an older, wiser audience whose Manolo Blahnik budget (not that it ever existed) now goes to mortgage payments. Divorce offers a darker kind of wish fulfillment for the 40ish set: The dream of blowing it all up, of refusing to compromise, of articulating all the anger you’ve swallowed to co-exist with another human, of putting your own happiness before others.

There’s comfort in seeing more accurate reflections of middle age on TV, but there’s also something oppressive about the fact that, at 40 and beyond, the aspirations on offer are those of landing a badass divorce lawyer or struggling to save just a shred of happiness, instead of chasing a lifetime of it. In Divorce, the characters haven’t just lost their naivety with age, they’ve also lost their optimism.

In the quest to correct the romcom fairy tales that have dominated TV for so long (by the time Ross chased Rachel to the airport, we’d seen that move a hundred times before), this new genre of grown-up marriage plot has swung beyond “real” into depressing. We get it: marriage is work (and so is divorce). Watching TV shouldn’t have to be.

More:
11 best turkey recipes for a perfectly roasted holiday bird
The 10 sweetest finds from Ikea’s new fall line
The orgasm shot: Why women are injecting blood below the belt