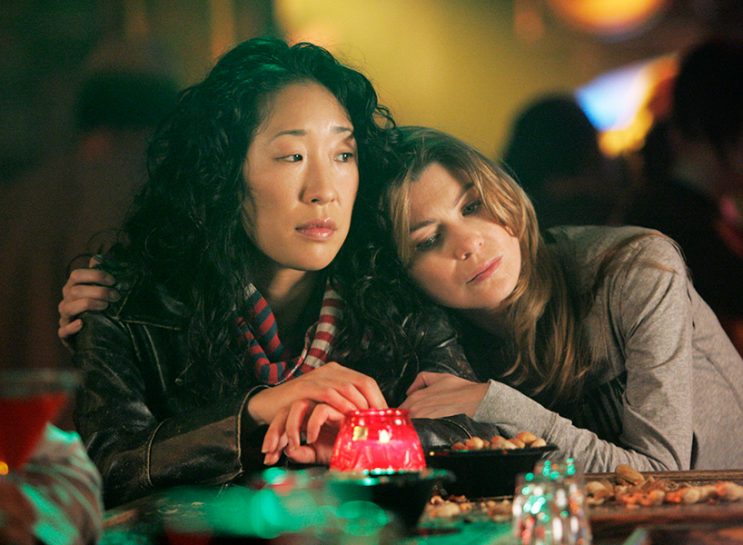 If you’re like us, you’ve been desperately trying to fill the emotional void that This Is Us left since the season 2 finale (which we’re *still* not over). Who knew weeping every Tuesday could be so therapeutic? If you can’t wait until season 3 premieres on Sept. 25, we’ve compiled our go-to TV shows and movies on Netflix that make us sob like newborn babies every. damn. time.

Synopsis: A stunning cancer diagnosis spurs Abbie to seek a future girlfriend for her current fiancé Sam, who’s clueless when it comes to dating.
Cast: Gugu Mbatha-Raw, Michiel Huisman, Christopher Walken
Streaming: Yes
Why it will make you ugly cry: Even though the opening scene reveals that Abbie (Gugu Mbatha-Raw) dies, this Netflix original will take you on a freaking emotional rollercoaster. For instance, in the weeks before her death, Abbie and fiancé Sam (Michiel Huisman) spend most of it fighting — until they realize what little time they have left together.

Synopsis: Intern (and eventual resident) Meredith Grey finds herself caught up in personal and professional passions with fellow doctors at a Seattle hospital.
Cast: Ellen Pompeo, Sandra Oh, Katherine Heigl
Streaming: Yes
Why it will make you ugly cry: From Preston Burke (Isaiah Washington) leaving Cristina Yang (Sandra Oh) at the altar to that fatal plane crash, this show is Shonda Rhimes at her finest, and we love every damn second of it.

Synopsis: Weighed down by a dark secret, IRS agent Ben Thomas tries to improve the lives of seven strangers in need of a second chance.
Cast: Will Smith, Rosario Dawson, Woody Harrelson
Streaming: Yes
Why it will make you ugly cry: Grab the tissues, y’all. This 2008 drama starring Will Smith is equal parts heartwarming and emotionally shattering. Watching the impact that Thomas (Smith) had on the selected strangers hits you right in the feels — and we’re not going to spoil it, but the ending will leave you in pieces.

The Best Of Me

Synopsis: Sparks fly between former high school flames when they return home for a funeral, but painful memories may keep them from having a future together.
Cast: Michelle Monaghan, James Marsden, Luke Bracey
Streaming: Yes
Why it will make you ugly cry: Let’s be honest, what Nicholas Sparks movie doesn’t leave you feeling like an emotional hot mess? The Notebook aside, this film takes it to the next level with storylines touching on child abuse, cancer, teen pregnancy and one totally unexpected and completely tragic conclusion. That said, watching Dawson (Luke Bracey) and Amanda (Liana Liberato) fall in love had us crying a whole lot of happy tears.

Synopsis: Ben Sherwood’s intriguing novel is the basis of this ghost story about Charlie, who is devoted to his brother, Sam, even after Sam’s death.
Cast: Zac Efron, Charlie Tahan, Amanda Crew
Streaming: Yes
Why it will make you ugly cry: First of all, seeing our childhood crush Zac Efron in tears is painful enough, but watching him grieve the death of his little brother and struggle to live his life without him will make your innocent heart shatter into a million pieces. We’re here for you, b.b.

Synopsis: When professors discover that an aimless janitor is also a math genius, a therapist helps the young man confront the demons that are holding him back.
Cast: Robin Williams, Matt Damon, Ben Affleck
Streaming: Yes
Why it will make you ugly cry: This 1997 Oscar-winning flick will hit you right in the heart. We still well up every time we see the pivotal scene where Sean Maguire (Robin Williams) and Will Hunting (Matt Damon) connect over an unexpected shared experience.

Synopsis: An accomplished pianist diagnosed with ALS and the aimless young woman who is her caregiver form a bond that enriches each of their lives.
Cast: Hilary Swank, Emmy Rossum, Josh Duhamel
Streaming: Yes
Why it will make you ugly cry: This film, based on the bestselling novel by Michelle Wildgen, will not only make you weep from the plethora of touching moments (like Emmy Rossum’s character helping Hilary Swank’s character play the piano again), but will also make you sob uncontrollably from watching Swank’s visceral portrayal of a woman struggling with a degenerative physical illness.

Synopsis: Two young lovers are torn apart by war and class differences in the 1940s in this adaptation of Nicholas Sparks’s best-selling novel.
Cast: Ryan Gosling, Rachel McAdams, James Garner
Streaming: Yes
Why it will make you ugly cry: Do we even need to explain ourselves here? This classic romance is filled with countless sob-worthy moments, like Noah (Ryan Gosling) and Allie’s (Rachel McAdams) iconic rain-soaked kiss — which won them an MTV Movie Award in 2005.

Synopsis: Witness the wrenching emotions that accompany end-of-life decisions as doctors, patients and families in a hospital ICU face harrowing choices.
Streaming: Yes
Why it will make you ugly cry: This Netflix original documentary is not for the faint of heart. In just 24 minutes, you’ll get deeply invested in the families’ remarkable stories, and you’ll see their struggles of wanting to keep their loved ones alive, despite their terminal illness.

Synopsis: Tracking one family’s harrowing experiences, this gripping drama depicts the chaos generated by the massive 2004 tsunami in Southeast Asia.
Cast: Naomi Watts, Ewan McGregor, Tom Holland
Streaming: Yes
Why it will make you ugly cry: Two words: Tom Holland. Watching the young actor (he was only 16 at the time!) be torn apart from his family will have you reaching for your tissue box—and wanting to call your mom — even before the opening credits. The fact that this is a true story just makes it *that* much more worth watching.