Hey Renee Zellweger, it’s OK if you *have* had work done

In a recent essay on the Huffington Post, Renee Zellweger attempted to kill those plastic surgery rumours. 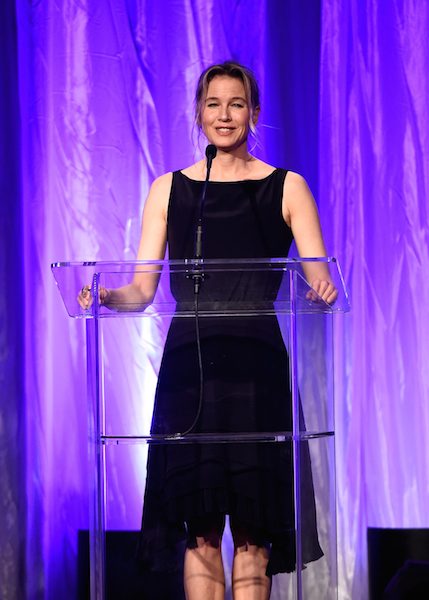 Like Jennifer Aniston before her, Renee Zellweger published an anti-tabloid screed on the Huffington Post this past Friday.

While Aniston’s bête noir was relentless pregnancy rumours, Zellweger’s is persistent plastic surgery talk: has she or hasn’t she done something to her eyes? Also like Aniston, who was plainspoken in refuting the most recent spate of pregnancy rumours (“For the record, I’m not pregnant”), Zellweger denies she’s had an eyelid lift: “Not that it’s anyone’s business, but I did not make a decision to alter my face and have surgery on my eyes.”

She’s 100 percent right that it’s no one’s business as to whether she’s had work done, just as the status of Aniston’s uterus is also none of our concern. But as with Aniston’s essay — in which she could have easily dispelled all.the.pregnancy.rumours.ever if she had just come out and said ~if true~ “I actually don’t want to have kids” — I can’t help but wonder why Zellweger, if she has in fact had some other type of cosmetic procedure on her face, just didn’t come out and own it and spike the rumours for once and for all?

According to The American Society for Aesthetic Plastic Surgery’s 2015 Cosmetic Surgery National Data Bank Statistics, American women had more than 11.5 million surgical and non-surgical cosmetic procedures last year. Is this depressing? It doesn’t necessarily have to be. What this report doesn’t track is how many of these women felt happier about their bodies after having eyelid surgery or a breast lift or Botox.

Yes, it’s entirely, grossly wrong for women to feel pressured into having their bodies sliced, diced and pricked in the pursuit of physical perfection as decreed by society/the media/our insane celebrity obsession. But at the same time, it is also within any woman’s right to change a feature that she’s chronically displeased with. (Personal note: rest assured I’m not in the pocket of the plastic surgery industry — though what a plush, flush and unlined pocket that must be. I’ve never had a cosmetic procedure of any type and I don’t have any plans to at the moment, but in the wise words of Canadian sage Justin Bieber, my personal stance remains “never say never.”)

The speculation around Zellweger’s appearance began in October 2014, when the Oscar winner appeared at a Hollywood gala with what many considered to be noticeably more open-looking eyes. This appearance prompted widespread deconstruction, with even the New York Times weighing in:

“Dr. Michelle Copeland, a plastic surgeon in New York City, said that Ms. Zellweger had probably elected to have a blepharoplasty, or upper eyelid lift, and possibly also a forehead lift, with the addition of injectable fillers that may have widened the planes of her face. She has also likely benefited from laser or ultrasound procedures that tighten the skin.”

Zellweger issued a denial then too, telling People: “I’m glad folks think I look different! I’m living a different, happy, more fulfilling life, and I’m thrilled that perhaps it shows.” She also noted that she was responding because, “it seems the folks who come digging around for some nefarious truth which doesn’t exist won’t get off my porch until I answer the door.”

To which I say: owning whatever shit is being said about you is, IMHO, often the best way to shut it down. In the case of Zellweger and the persistent plastic surgery rumours, imagine the power of saying (if, of course, this is actually, legitimately true): I didn’t have surgery on my eyes, but I got fillers/Botox/a nose job — and it made me feel freaking great. I have a feeling that porch would clear out pretty fast.

More:
Canada’s MMIW will be the focus of a doc backed by Zoe Saldana
What to do if you’re being harassed online
Bad Moms is awesome — except for the really bad dads