Princess Charlotte Starts Her New School With Mom, Dad And George By Her Side

Prince George's little sister strolled up to Thomas's Battersea like a boss, looking cute as can be for her first day of big-girl school. 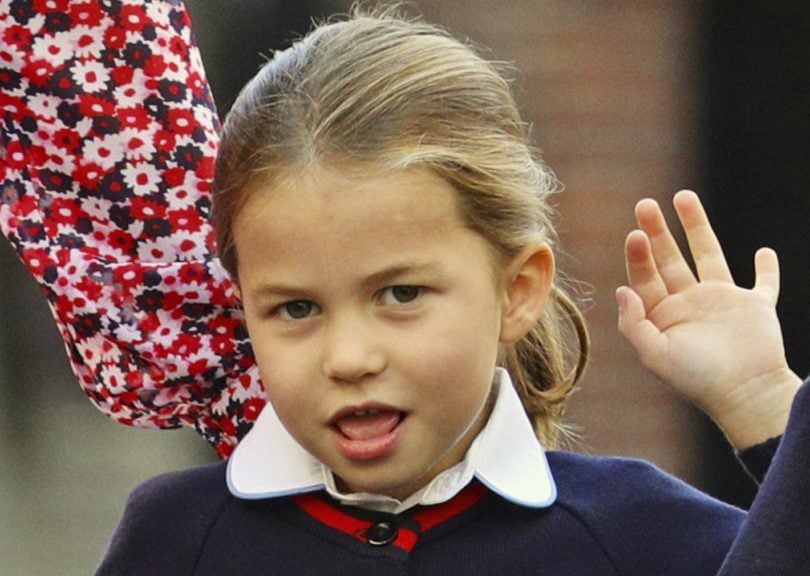 First-day-of-school jitters are real, but as Princess Charlotte was dropped off for her first day at Thomas’s Battersea on Thursday she mostly kept her nerves under wraps. The confident four-year-old held hands with Kate Middleton, staying close to her mom but smiling at the cameras. Prince George, who made a few funny faces, clutched dad Prince William’s hand as the sweet foursome made their way into the historic building. 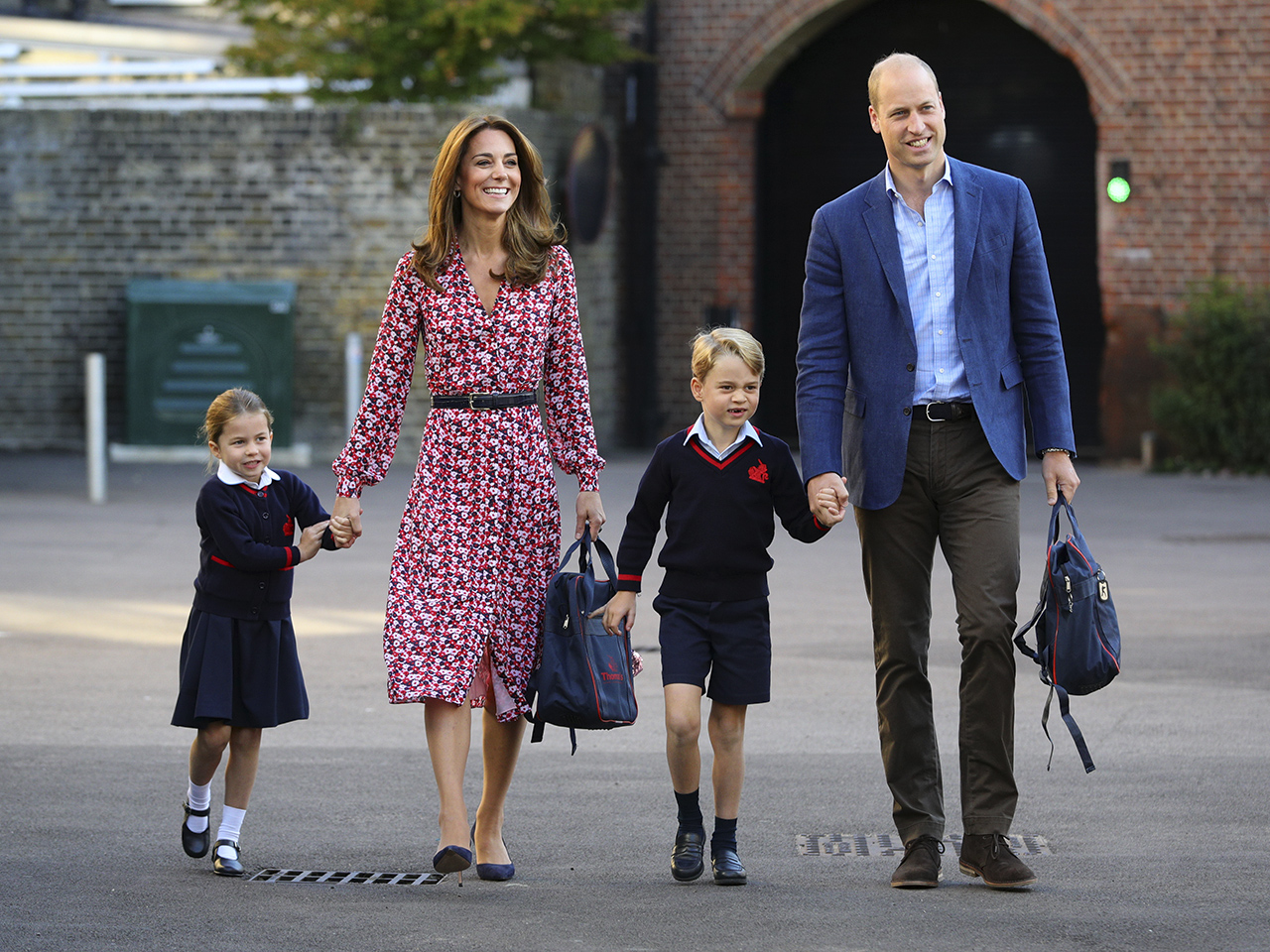 The princess, who will go by Charlotte Cambridge (and maybe her nickname “Lottie” with close friends), looked adorable in her school uniform—a navy knee skirt, matching cardigan with red piping, white socks and her blue Mary Janes. Kate, who wore a red floral Michael Kors midi dress, held onto her little girl’s backpack (complete with a sequin unicorn key chain!).

William and Kate must be so excited to have their kids in one place—not just because they can look after each other but also since their parents don’t have to shlep to two drop offs anymore! After taking the duo to school, the proud parents shared a personal snap from earlier that day. The Instagram caption read: “The Duke and Duchess of Cambridge are very pleased to share a photograph of Prince George and Princess Charlotte at Kensington Palace this morning. The photo was taken shortly before Their Royal Highnesses left for Thomas’s Battersea.”

The Duke and Duchess of Cambridge are very pleased to share a photograph of Prince George and Princess Charlotte at Kensington Palace this morning.

The photo was taken shortly before Their Royal Highnesses left for Thomas’s Batterseapic.twitter.com/oiMKArFQnd

Prince George’s little sis looked all grown up compared to her first day at Willcocks Nursery School last year, where she wore a little red coat, matching Mary Janes and a cozy pink scarf to pose on the steps of Kensington Palace.

Back in 2017, when Prince George made his debut, the future king only had his dad by his side—and looked a bit nervous making his way inside. Kate was at home dealing with her third bout of extreme morning sickness (Hyperemesis gravidarum), and we can’t blame her for having to sit that one out. No wonder she was clearly so excited to be back in action for Charlotte’s first day (we’re guessing one-year-old Louis was back at home with nanny Maria). 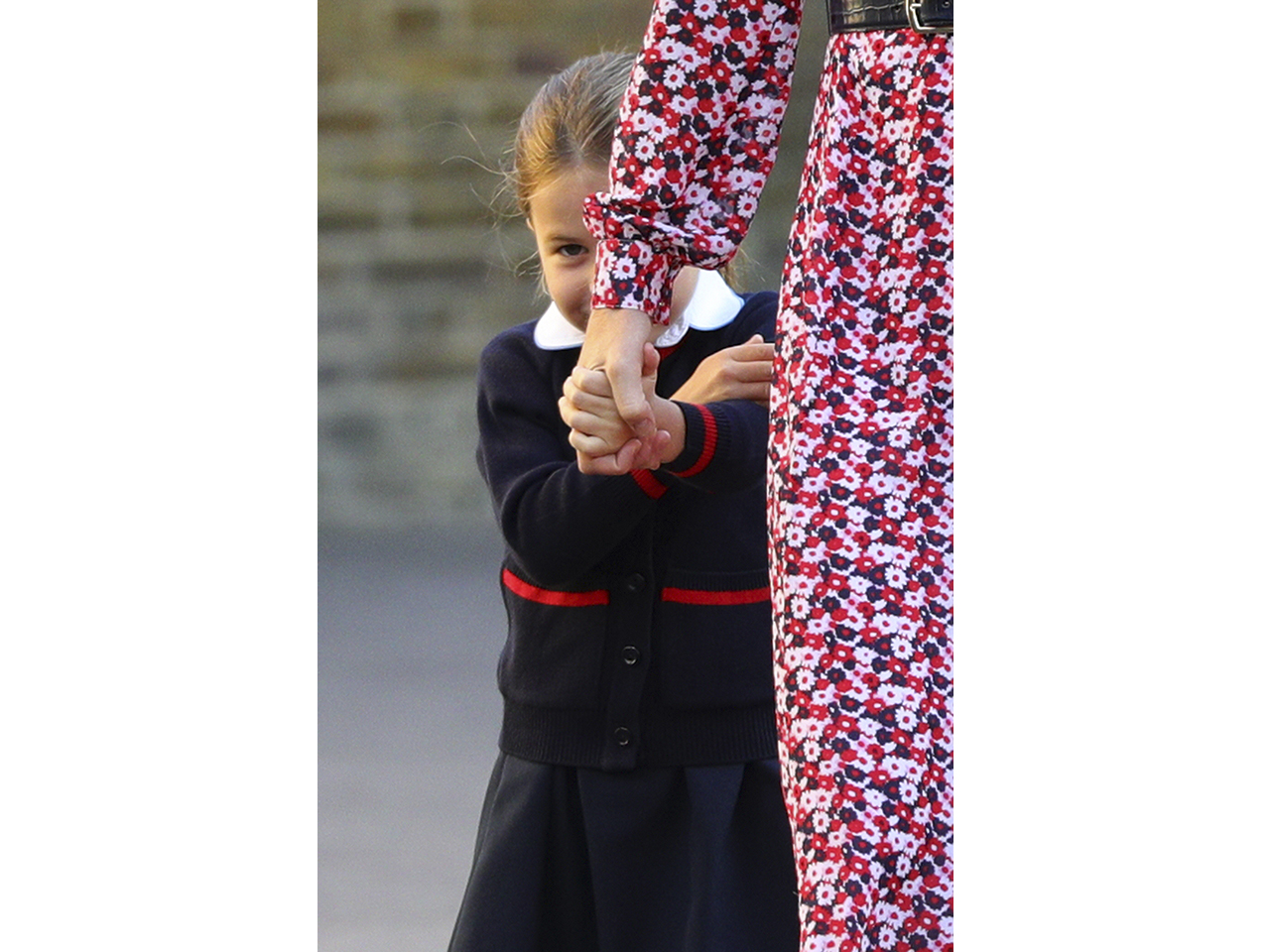 The Cambridges were welcomed by Helen Haslam, the head of the lower school, who shook Charlotte’s hand outside the $30,000-per-year school, where the top rule is to “be kind.” Starting in her reception year (that’s pre-K on this side of the pond), Charlotte will also learn core values like courtesy, confidence, giving and humility while studying art, French, music, drama, phys. ed and ballet. 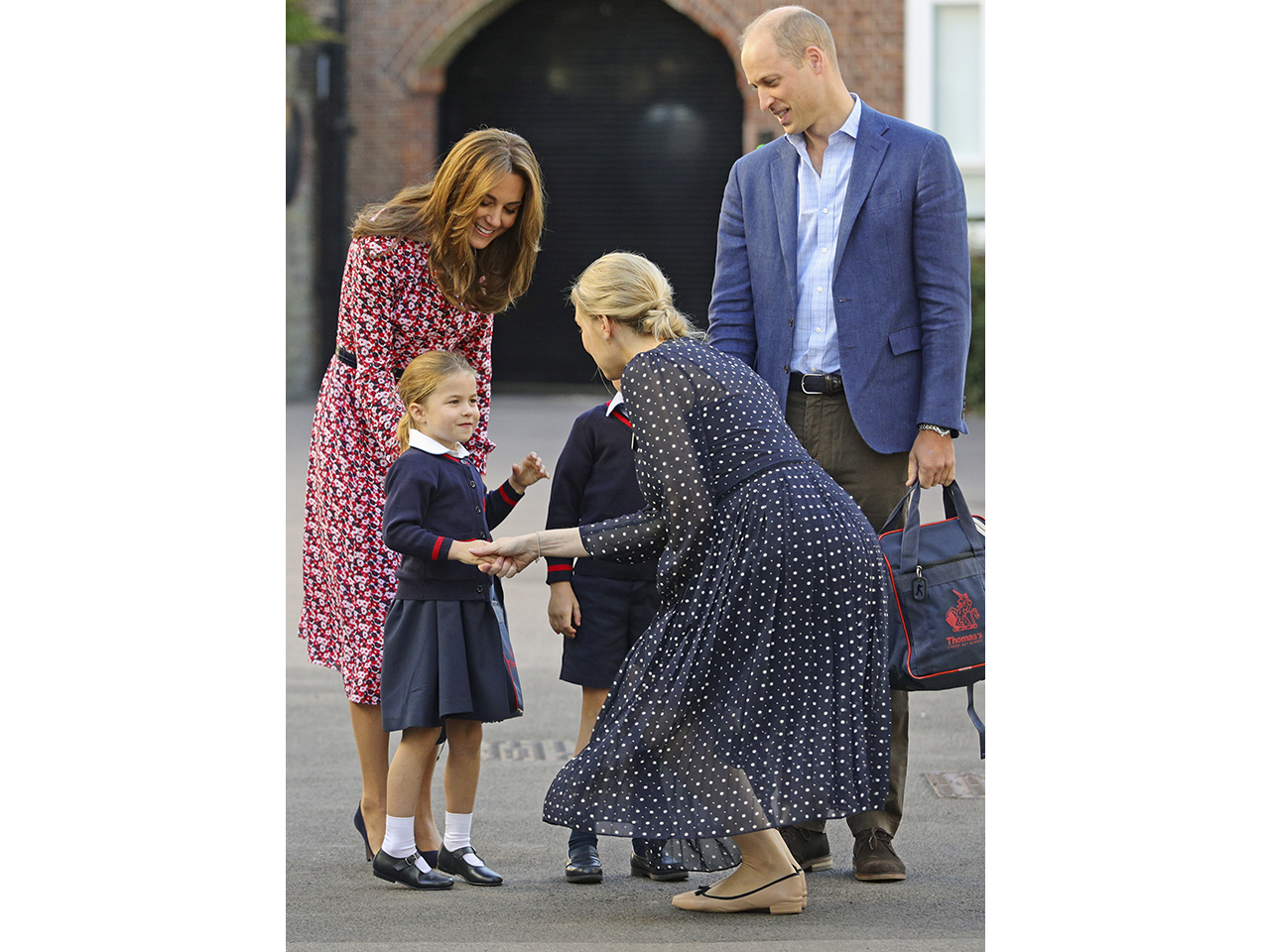 If the royal newcomer has any issues at school, historian Penny Junor told Hello! that she’ll have the perfect ally in her six-year-old brother, who has been at Thomas’s for two years and is kicking off grade one. “Prince George is a very protective and lovely older brother. I’m sure he’ll look after his little sister and take great pride in showing her the ropes.”

Like any proud preschooler, we’d bet Charlotte was feeling herself on that walk into her big-girl school. “She can’t wait to be with George at big school. She is so excited about it all,” a source told People. “They are close in age, and they spend so much time together”—and with good reason! “Playdates [with outsiders] can be tricky, so they learn to lean on each other.” 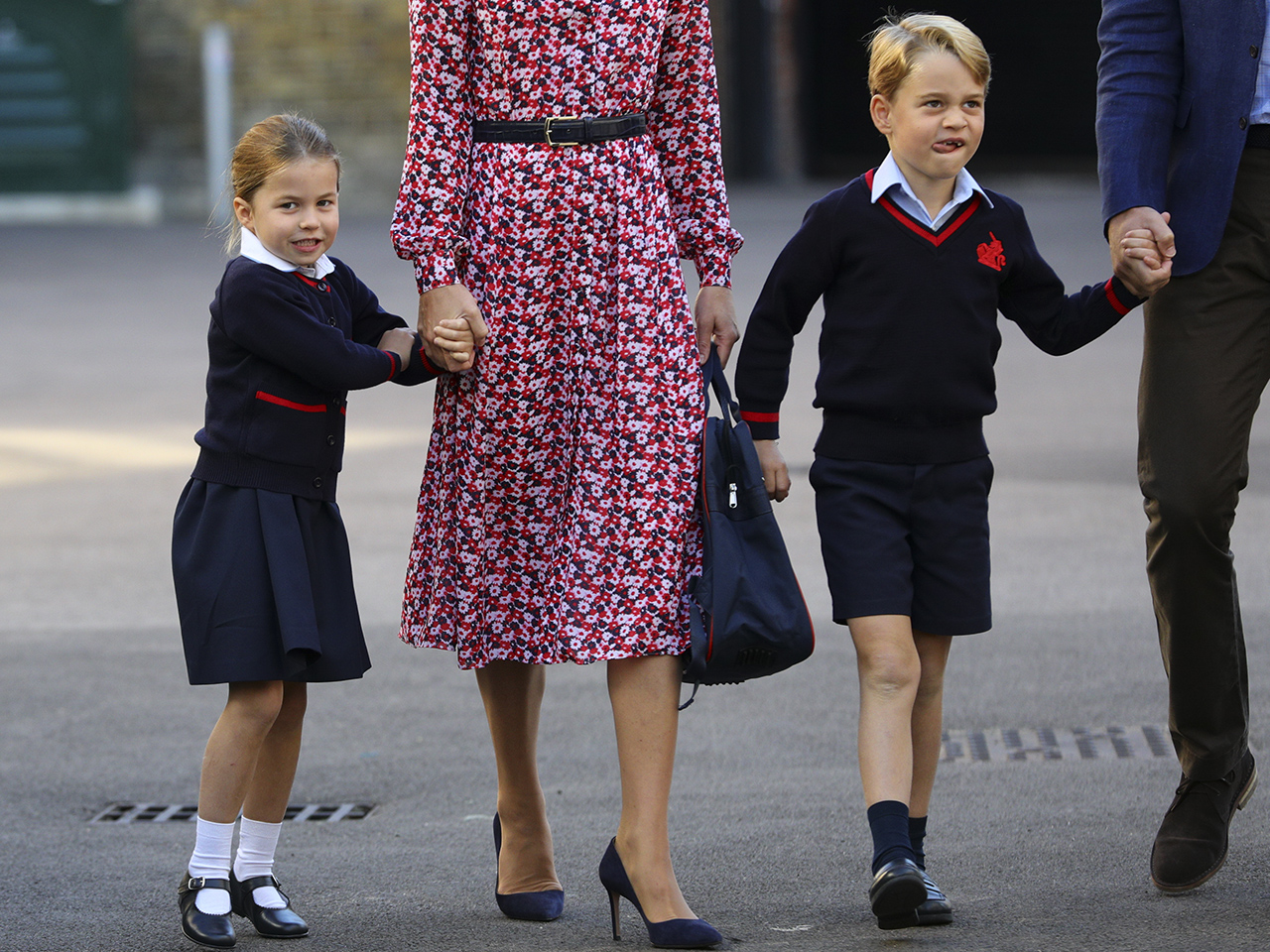 And while Charlotte may find her first day daunting, she’ll have plenty of help adjusting—and the school couldn’t be happier to count the royal cutie as a pupil. Headmaster Simon O’Malley said in a statement: “We are delighted that the Duke and Duchess of Cambridge have decided that Princess Charlotte will join her elder brother, Prince George, at Thomas’s Battersea. We greatly look forward to welcoming her and all of our new pupils to the school in September.”