Matt Damon, Michael B. Jordan and others have recently committed to 'inclusion rider' contract clauses to tackle the entertainment industry's diversity problem. 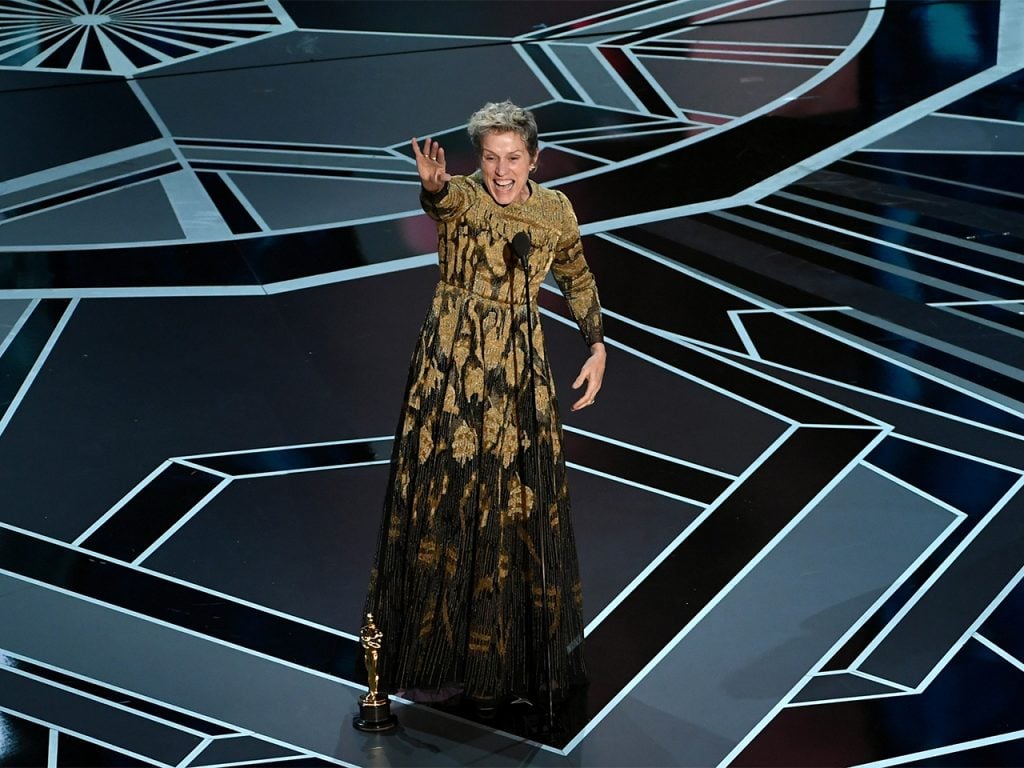 One very obvious high point of the Post-Weinstein awards season — in addition to the sea of black dresses, Time’s Up pins and powerhouse speeches (thanks, as always, Oprah) — was Frances McDormand’s instantly classic call to arms at the Oscars. Accepting the best actress trophy for her performance as a bilious, grieving mother in Three Billboards Outside Ebbing, Missouri, McDormand implored Hollywood’s elite to diversify their cast and crew with the help of inclusion riders — a contract clause that industry players like Michael B. Jordan, Matt Damon and Ben Affleck and Bridesmaids‘ Paul Feig have all recently pledged to adopt.

Now, if you’re wondering what “inclusion riders” are (I heard “inclusion writers,” myself), you’re not alone.

‘Inclusion’ is our top search on the night, followed by ‘cinematography,’ ‘in memoriam,’ ‘feminism,’ and ‘rider.’ #Oscars

But this little-known contractual clause could legitimately and visibly overhaul the established roster of silver-screen talent.

So, what is an inclusion rider (not writer!), anyway?

It’s an “equity clause” that an actor can have written into their contract, which requires a film’s cast and crew to meet a certain threshold of diversity that reflects societal demographics (e.g., a 50-50 gender split). It’s essentially a way to weed out biases at the casting stage, however unconscious they may be. The clause was originally introduced in a 2016 TED Talk by Dr. Stacy Smith, founder of the Annenberg Inclusion Initiative at the University of Southern California.

In a post-Oscars interview with The Guardian, Smith elaborated that “the goal is that talent can take the inclusion rider and adopt it in ways that make sense for their values and their beliefs,” she said. With that wiggle room in mind, Smith suggested that, regardless of the requested percentages, the clause could have broader implications for fair pay and representation among groups historically denied both (LGBTQ talent and people of colour or with disabilities, for example). And if the clause was violated? Smith says the contract could also stipulate that the film’s distributors “pay a penalty to a fund that supports female directors and other underrepresented groups.”

Has a similar rule been successfully implemented in other industries?

Yes. Many companies, regardless of industry, have internal hiring quotas for diversity’s sake, but in a 2014 op-ed for The Hollywood Reporter, Smith specifically name-checked a measure already in play at the NFL.  “In interviews we conducted with [film] industry decision-makers, they used masculine words (such as “authoritative”) twice as often as feminine words (“nurturing”) to describe successful film directors,” she wrote. “To battle this bias, consider the Rooney Rule, an NFL-wide commitment to considering people of color for head coaching positions. A Hollywood Rooney Rule would ask execs and studio heads to at least interview women for director jobs.”

So how do the women feel about inclusion riders?

They’re into them — and have been for some time. Just ask Wrinkle In Time director Ava DuVernay. Or Jessica Chastain, who negotiated a joint deal to guarantee co-star Octavia Spencer a higher salary for an upcoming film. Or 2016 Best Actress winner Brie Larson, who voiced her support on Twitter during the Oscars telecast:

I’m committed to the Inclusion Rider. Who’s with me? https://t.co/yvQ0wR5D80

Or ask Smith, who told The Guardian she has already worked with lawyers within the film industry to craft contract language and spoken with actors interested in folding it into negotiations. As McDormand reiterated backstage following her big win, there’s “power in rules.”