Oscars 2022 Recap: The Biggest Moments From This Year’s In-Person Show 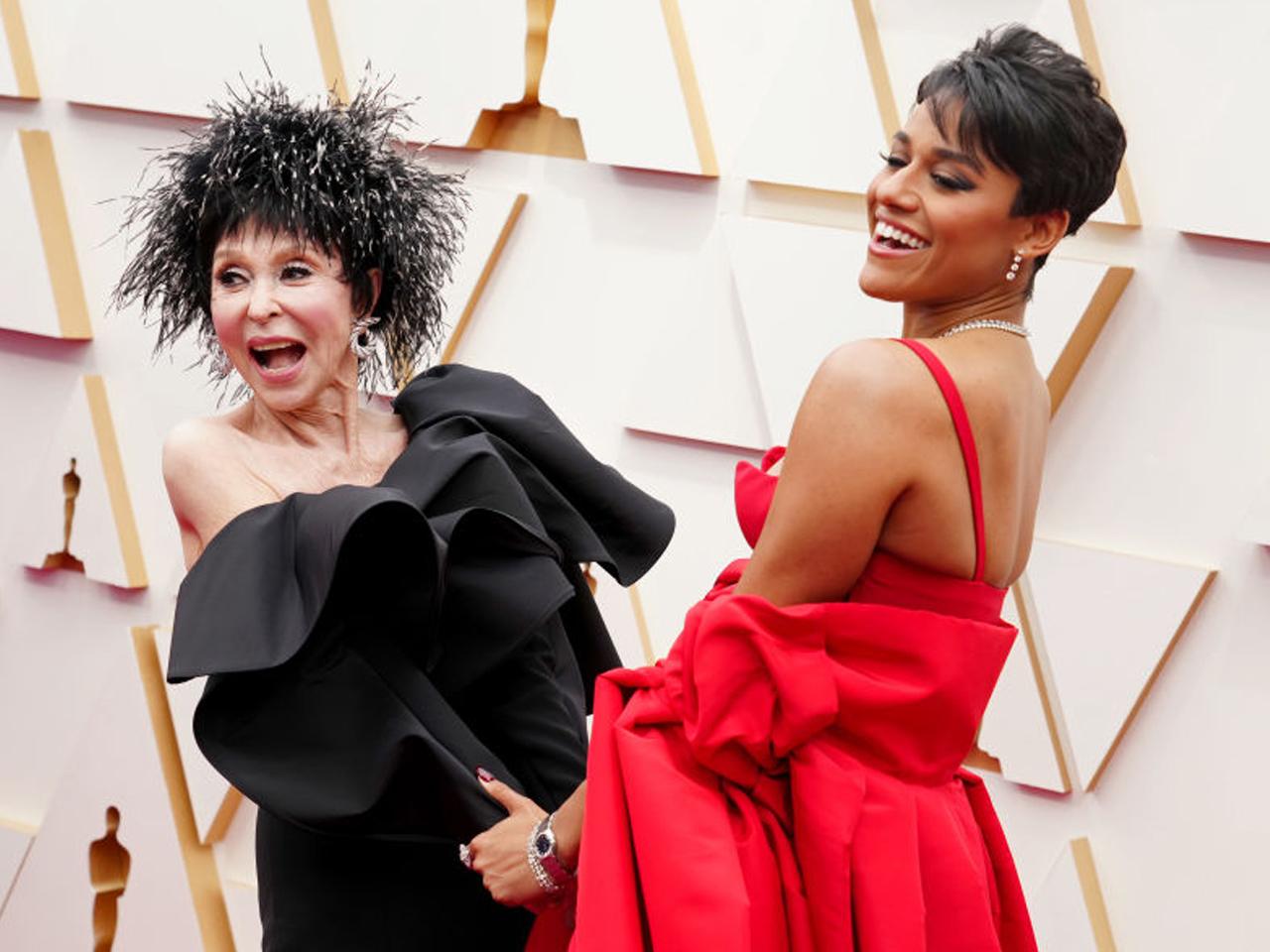 One year after a socially distanced ceremony was held at a Los Angeles train station, the Oscars returned to the Dolby Theatre on March 27—bringing plenty of glamour, excitement and unplanned drama.

For starters, Hollywood’s biggest night had not one, but three hosts. To usher in the return of in-person festivities, Wanda Sykes, Amy Schumer and Regina Hall teamed up to emcee the ceremony for the first time in three years. The 94th Academy Awards welcomed a star-studded lineup of presenters including Canadians Elliot Page, Simu Liu and Shawn Mendes. Beyoncé opened the ceremony with a pre-recorded performance of her original song “Be Alive” from the Oscar-winning King Richard (with a surprise cameo from her daughter Blue Ivy). Brother-sister musical duo Finneas O’Connell and Billie Eilish also performed their original song “No Time To Die” from the latest James Bond film, and then they won an Oscar for it. 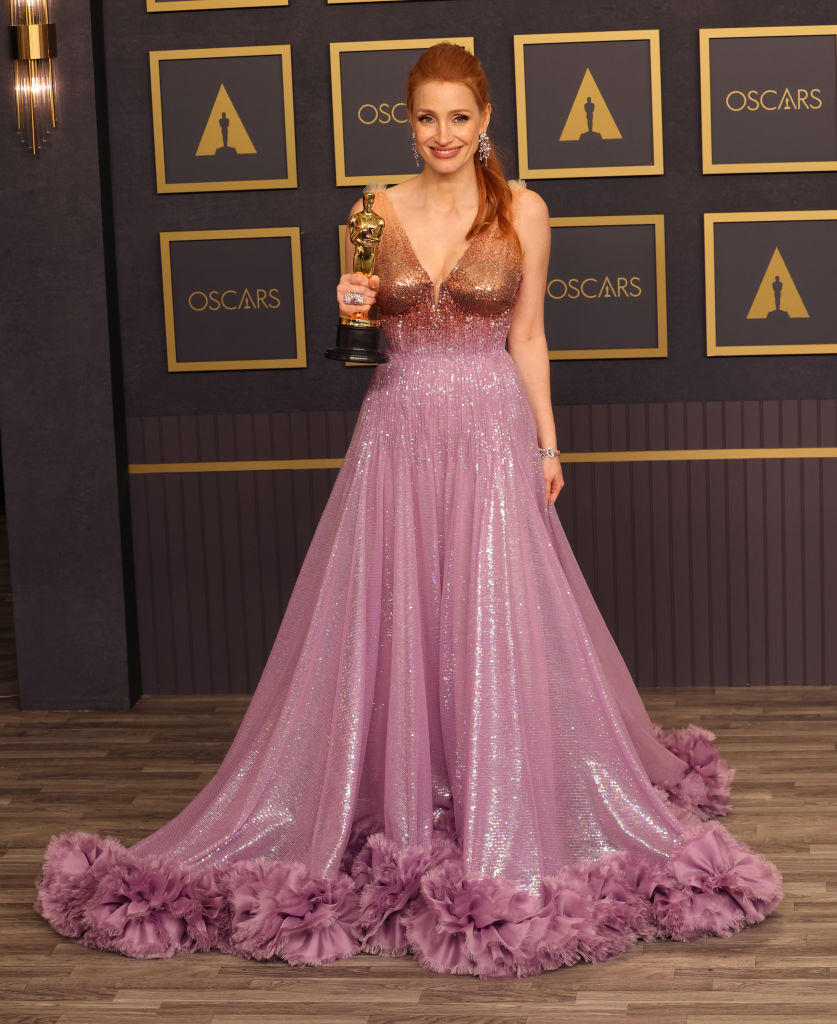 Jessica Chastain, winner of the Actress in a Leading Role award for ‘The Eyes of Tammy Faye’ poses in the press room at the 94th Annual Academy Awards. (Photo by David Livingston/Getty Images)

Some of this years’ changes were met with controversy. For the first time, the Academy made the decision to cut eight awards from the live telecast by announcing them ahead of time—including film editing, original score and production design, all won by Denis Villeneuve’s Dune. Those wins were then woven into the show, making for an edited telecast that some fans found to be clunky and disorganized.

In contrast to last year, the Oscars felt very back-to-normal, with few masks and no social distancing in sight. Dune took home the most trophies, winning six awards in total. Netflix’s The Power of the Dog also made history after Jane Campion won for best director. Campion is now the third woman to ever win that category, following Kathryn Bigelow (The Hurt Locker in 2010) and Chloé Zhao (Nomadland in 2021). The night was marked by first-time victories—like Jessica Chastain winning for her leading role in The Eyes of Tammy Faye—and some unscripted surprises. All in all, it was certainly a year to remember. Read on for our recap of the 2022 Oscars.

The hosts tackled the wage gap, race and Oscar controversies

The emcees’ commencement speech was a decidedly toned-down roast compared to previous years. Even still, they managed to cover a slew of hot-button issues. The three women started off by joking that the Academy had them host “because it’s cheaper than one man.” They addressed race, too, with Hall declaring that she was “excited to be representing Black women who are standing proud.” Schumer replied, “I’m representing white women who call the cops when you get a little too loud.” They also referenced the Academy’s contentious decision to cut technical awards from the live broadcast by presenting them ahead of time. “It was a controversial and difficult decision but I think we’ve moved on,” said Hall. Meanwhile, the stage lights behind her flickered—showing just how vital behind-the-scenes production is.

Ukraine was referenced on the red carpet

Ahead of the big night, the UN Refugee Agency distributed blue ribbons that read, “#WithRefugees,” to guests. As stars made their way down the carpet, the ribbons were spotted on stars like Jamie Lee Curtis, Samuel L. Jackson and Youn Yuh-jung. Other celebs gave nods to Ukraine’s yellow and blue flag in their own ways, including Best Actor nominee Benedict Cumberbatch who wore a dual-coloured pin and Dune star Jason Momoa who sported a yellow and blue handkerchief.

Academy Award Winner Youn Yuh-jung arrives at the 2022 #Oscars donning a blue ribbon in support of those who have fled Ukraine and other conflict zones. pic.twitter.com/UQElOOTMvL

To mark the return of in-person Oscars festivities, it’s perhaps no surprise that red—the quintessential colour of passion and excitement—was a wardrobe theme. Variations of vermillion were worn by Hollywood fashionistas like Tracee Ellis, Jennifer Garner and Canadian actor Simu Liu. The bold hue was also seen on Oscar nominees, from Ariana DeBose in a Valentino pantsuit and cape to Kirsten Dunst in a Christian Lacroix tulle gown. Statement-making trains had their own memorable red carpet moments, donned by the likes of Nicole Kidman, who wore an Armani Privé blue number, Zendaya, who opted for a two-piece set with a trailing sequin bottom and Jada Pinkett Smith, who emerged in an emerald green Jean Paul Gaultier ruched frock with a dramatic train.

No shirt, no problem, if you're Timothée Chalamet at the #Oscars https://t.co/M5GljMMdCx pic.twitter.com/pXwipXrkBE

DeBose made history after winning the Best Supporting Actress award for her role as Anita in West Side Story. She is the first queer woman of colour to win an acting Oscar and the second Latina to win, following Rita Moreno, who won for playing the same role 60 years ago. She and Moreno are now the first pair of actresses to win an Academy Award for playing the same character. In her teary acceptance speech, DeBose shouted out “the divine inspiration that is Rita Moreno,” who starred alongside her in the film and was sitting in the audience. “Your Anita paved the way for tons of Anitas like me,” she continued. She called out to all queer women of colour watching, saying, “I promise you this: there is indeed a place for us.”

In one of the most memorable moments of the evening, Kotsur made history for his role in CODA. He joined co-star Marlee Matlin as the only two deaf actors to win at the Academy Awards. The victory was made even more heartwarming with the adorable moments between him and actor Youn Yuh-jung, who was presenting the award. Before declaring his win, Yuh-jung announced it in ASL. And when Kotsur came onstage to accept it, Yuh-jung took the trophy so he could sign his acceptance speech. “This is dedicated to the deaf community, the CODA community and the disabled community,” said Kotsur. “This is our moment.” The speech was met with a standing ovation of audience members clapping in ASL by waving their hands.

In a shocking and unplanned turn of events, Will Smith slaps Chris Rock

When presenting an award, comedian Chris Rock jokingly compared Jada Pinkett-Smith to “G.I. Jane,” in reference to her bald head. Pinkett-Smith has spoken openly about having alopecia, an autoimmune disorder that causes hair loss. Her husband Will Smith then got up on the stage and slapped Rock. When he returned to his seat, the sound was cut as he yelled, “Keep my wife’s name out of your f*cking mouth.” The unscripted moment prompted Rock to say, “Will Smith just smacked the sh*t out of me. That was the greatest night in the history of television.” Actor Lupita Nyong’o, who was seated behind Smith, quickly went viral thanks to her understandably shocked facial expression.

… and then apologizes for it.

Roughly thirty minutes later, Smith won the Best Actor Oscar for his role in King Richard. In the biopic, he stars as Richard Williams, the father and coach of famed tennis players Venus and Serena Williams. While accepting his award, Smith said he relates to Williams as a “fierce defender of his family.” He went on to apologize to the Academy and his fellow nominees for his earlier confrontation with Rock. “Love will make you do crazy things,” he tearfully continued. Before leaving the stage, he concluded, “Thank you, and I hope the Academy invites me back.”

The heartfelt drama, which has a predominantly deaf cast, took home all three of its nominations: best supporting actor, best adapted screenplay and best picture. The Apple TV+ original made history by becoming the first film from a streaming service to take home the coveted best picture award. It was also a momentous win for deaf representation onscreen. In accepting the award, producer Philippe Rousselet said, “Thank you to the Academy for letting our CODA make history tonight.” The telecast ended with guests standing to applaud the film in ASL. It was a refreshing image to see at the Academy Awards, which have not historically been representative or inclusive of deaf communities. (Some viewers noted, however, that the show was still lacking in accessibility by only including ASL interpreters for speeches related to CODA.) 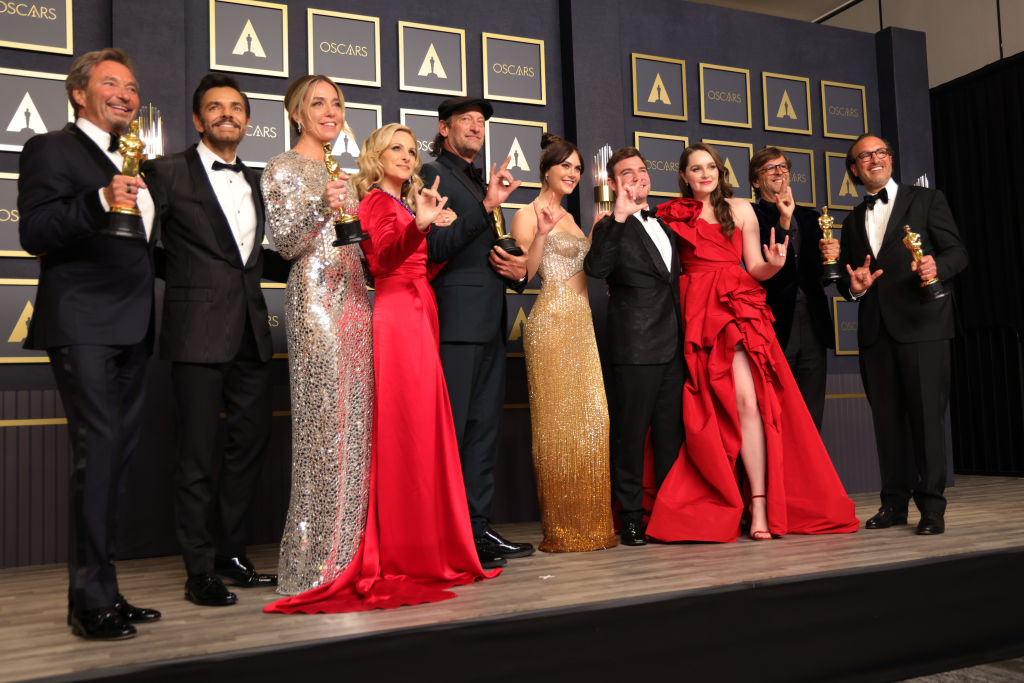