Oscars 2020 Recap: The Biggest Moments Of The Night

Including an awesome example of women supporting women, a major celeb's first statuette for acting and two hugely historic wins. 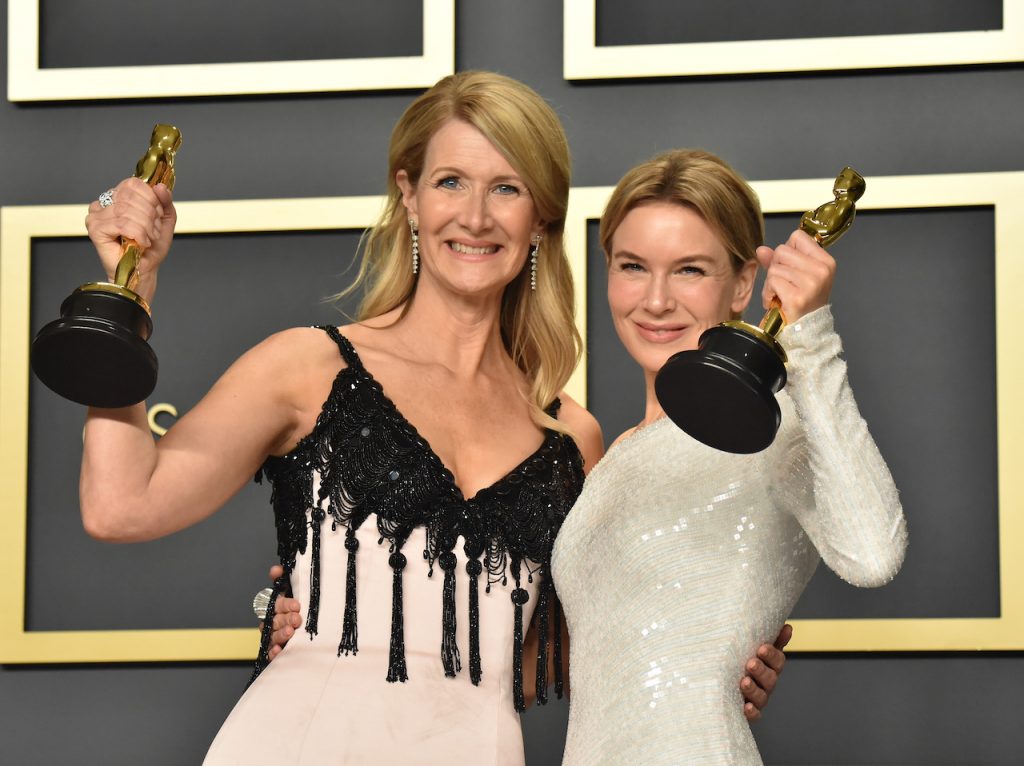 This year, the Oscars drama started well before stars set foot on the red carpet. Despite 2019 being a record year for women and people of colour in lead or co-lead roles, the 2020 acting nominees were nearly all white (except for Harriet’s Cynthia Erivo). Oh, and not a single woman was nominated in the Best Director category—a major snub to this year’s many stellar female directors, including Greta Gerwig (Little Women) and Lorene Scafaria (Hustlers).

At the same time, there was at least one major bright spot: Bong Joon Ho’s Parasite made history as the first South Korean film to earn a nomination—actually, make that six: including the potential for his thriller to become the first-ever foreign-language film to win Best Picture. It was a big night with big stakes.

Didn’t manage to catch all the action? Don’t worry, we watched so you didn’t have to. Here’s what you need to know.

At least one starlet packed a snack

With an award show that lasts at least three hours, and no host to pull an Ellen DeGeneres and order pizza for the crowd, Once Upon a Time…in Hollywood’s Julia Butters came prepared. The 10-year-old starlet showed up with a turkey sandwich tucked into her bedazzled clutch. “I don’t like some of the food here,” she told L.A. Times reporter Amy Kaufman.

Julia Butters brought a turkey sandwich in her purse because "I don't like some of the food here. #Oscars pic.twitter.com/sCDTr4GZYq

In 2018, Natalie Portman went viral for calling out the “all-male nominees” in the Best Director category at the Golden Globes. With yet another all-male directing category at this year’s Oscars, Portman found a new way to shine light on deserving female directors. The actor walked the red carpet with a black cape that was embroidered with the first names of directors Lulu Wang (The Farewell), Lorene Scafaria (Hustlers), Greta Gerwig (Little Women), Marielle Heller (A Beautiful Day in the Neighborhood), Melina Matsoukas (Queen & Slim), Alma Har’el (Honey Boy), Mati Diop (Atlantics) and Céline Sciamma (Portrait of a Lady on Fire). 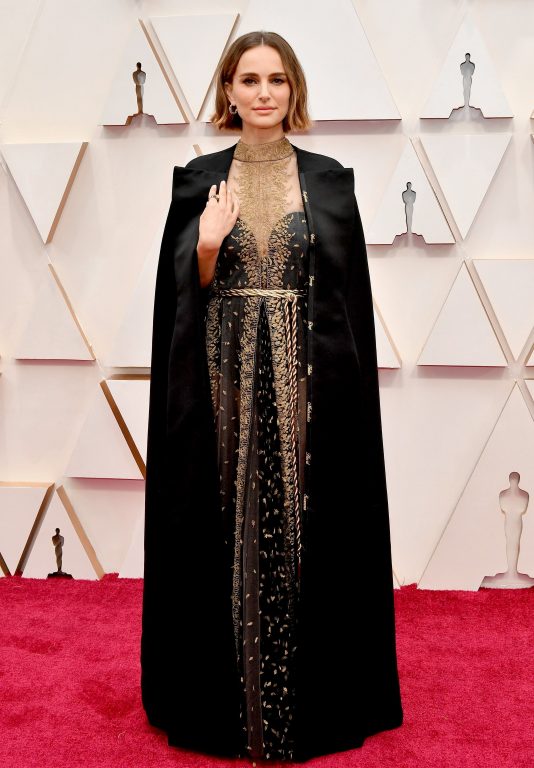 Films like Us, Queen & Slim, Dolemite Is My Name and Midsommar may have been completely snubbed by the Academy, but they made an appearance in the show’s opening number. Janelle Monáe kicked things off with a high-energy performance that included background dancers dressed to represent those films, as well as Little Women, Joker and Jojo Rabbit. In case it wasn’t clear that this performance was a giant metaphor for Hollywood’s song-and-dance act around issues of representation and inclusion, Monáe drove the point home by singing “it’s time to come alive because the Oscars is so white.”

#Oscars Moment: @JanelleMonae kicks off the #Oscars with an opening number that leaves everyone feeling alive! pic.twitter.com/J76UFuqxby

No host is the new normal

For the second year in a row, the Oscars went hostless. After the opening performance, Steve Martin and Chris Rock, both past hosts, took the stage to deliver a joint opening monologue—which they joked felt like a significant demotion. “They don’t really have hosts anymore, why is that?”  asked Martin. “Twitter!” replied Rock.

Instead, the show once again relied on its A-list presenters and performers, including Oscar winner Regina King and Hamilton’s Anthony Ramos, to keep the show moving. Hollywood icon Jane Fonda, rocking a new silver ’do, closed out the night.

But if we got back to having a host, please make it Kristen Wiig and Maya Rudolph

We said it last year, but it bears repeating: the women of SNL would make phenomenal Academy Awards hosts. This year, that was proven by alumni Maya Rudolph and Kristen Wiig, who presented the Best Production Design and Best Costume Design awards and jokingly showed off their acting chops for the directors in the room.

#Oscars Moment: @JanelleMonae kicks off the #Oscars with an opening number that leaves everyone feeling alive! pic.twitter.com/J76UFuqxby

The lack of representation was constantly called out

From the opening performance and monologue to mentions from presenters and winners, the Awards’ lack of diversity and inclusion was frequently called out during the night. The tone was perhaps summarized best by Pitch Perfect actor Utkarsh Ambudkar, who rapped a recap of the show at its midway point. “Keep an open mind, I’m sure you’ll find there’s plenty of light for us all to shine,” he said, referencing the change that still needs to happen in Hollywood.

Eminem did a surprise performance

Blink and you might’ve thought it was 2003. Eminem surprised the crowd with a performance of his iconic track, “Lose Yourself” from 8 Mile, which won the Academy Award for Best Original Song in 2003. As Variety noted, this was somewhat of a do-over since Eminem did not perform at or even attend the awards when he was nominated.

After 18 years , Eminem lights up the #Oscars2020 stage with his Oscar-winning song. 🔥
.
.
.#Eminem #eminemoscars pic.twitter.com/FEHdfdLQPc

In 2012, former NFL athlete Matthew A. Cherry tweeted that one day, he would win an Oscar. This year, he achieved that goal with his animated short Hair Love. “We wanted to see more representation in animation, we wanted to normalize Black hair and there’s a very important issue out there, the CROWN Act,” he said during his acceptance speech, referencing the “Creating a Respectful and Open World for Natural Hair” Act, a law that has gone into effect in three states—and is currently under consideration by 22 others—that prevents discrimination based on hair style or texture.

Cats got a few laughs

In pitch-perfect casting, James Corden and Rebel Wilson presented the award for Best Visual Effects. The duo hit the stage dressed in character from Cats, hilariously noting that, “As cast members of the motion picture Cats, nobody more than us understands the importance of good visual effects.”

Taika Waititi had a historic win

Prior to Sunday night, Jojo Rabbit writer-director-star Taika Waititi had already made history by becoming the first Indigenous person to be nominated for Best Adapted Screenplay. Waititi, who is of Maori descent, then made history again by winning the category. “I dedicate this to all the Indigenous kids in the world who want to do art and dance and write stories. We are the original storytellers and we can make it here, as well,” he said. When he took the stage as a presenter, he also made what is likely the first-ever land acknowledgment at the Oscars.

"The Academy would like to acknowledge that tonight we have gathered on the ancestral lands of the Tongva, the Tataviam and the Chumash. We acknowledge them as the first peoples of this land on which the motion pictures community lives and works."

— Taika Waititi at the #Oscars pic.twitter.com/aWrBpollxC

Bong Joon Ho won Oscar after Oscar, and it was heartwarming to watch

Parasite’s director was the absolute gem of the 2020 award season, not only because of his formidable film, but also because of his proud dad energy and on-point acceptance speeches. The Academy Awards was no exception. After his first win of the night for Best Screenplay, Bong dedicated the award to South Korea, smiling ear-to-ear as he clutched his new statue. After he accepted the award for the newly-renamed Best International Feature Film—a category that, he noted, used to be for Best Foreign Language Film—he grinned and told the crowd, “I’m ready to drink tonight.”

But the Oscars weren’t done with him yet, and Bong soon found himself back up on stage accepting the award for Best Director. Truly shocked, he used his time at the mic to honour his fellow nominees and say that he wished he could saw his award in pieces to share with them all.  “Thank you, I will drink until next morning,” he said, solidifying his status as the must-have guest at all Oscar after-parties.

For the first time ever, the Oscars included a female conductor

In 91 years, the Oscars has never had a female conductor. That changed this year with Irish musician Eimear Noone, who conducted the orchestra in a medley of the songs nominated for Best Original Score. Her energetic performance earned thunderous applause and a standing ovation from Janelle Monáe.

There were other big wins—including another hugely historic one

Brad Pitt may be a household name, but until this year, he hadn’t won an Oscar for acting. The Once Upon a Time…in Hollywood star won Best Supporting Actor. Laura Dern took home Best Supporting Actress for Netflix’s Marriage Story, tearfully thanking her family. “Some say never meet your heroes, but I say if you’re really blessed, you get them as your parents,” she said, acknowledging her parents and “acting heroes,” Diane Ladd and Bruce Dern.

In the biggest win of the night, Parasite took the top honour at the 92nd Academy Awards, becoming the first foreign-language film to ever win Best Picture.

“We never imagined this to ever happen, we are so happy. I feel like a very opportune moment in history is happening right now,” said Parasite producer Kwak Sin-ae via translator Sharon Choi, who is also a director. By the time the cast and crew of Parasite accepted their trophies, the Oscars were more than 30 minutes over their allotted time—but this inspiring and historic win was well worth the wait.