Here's everything you missed from the 90th Academy Awards. 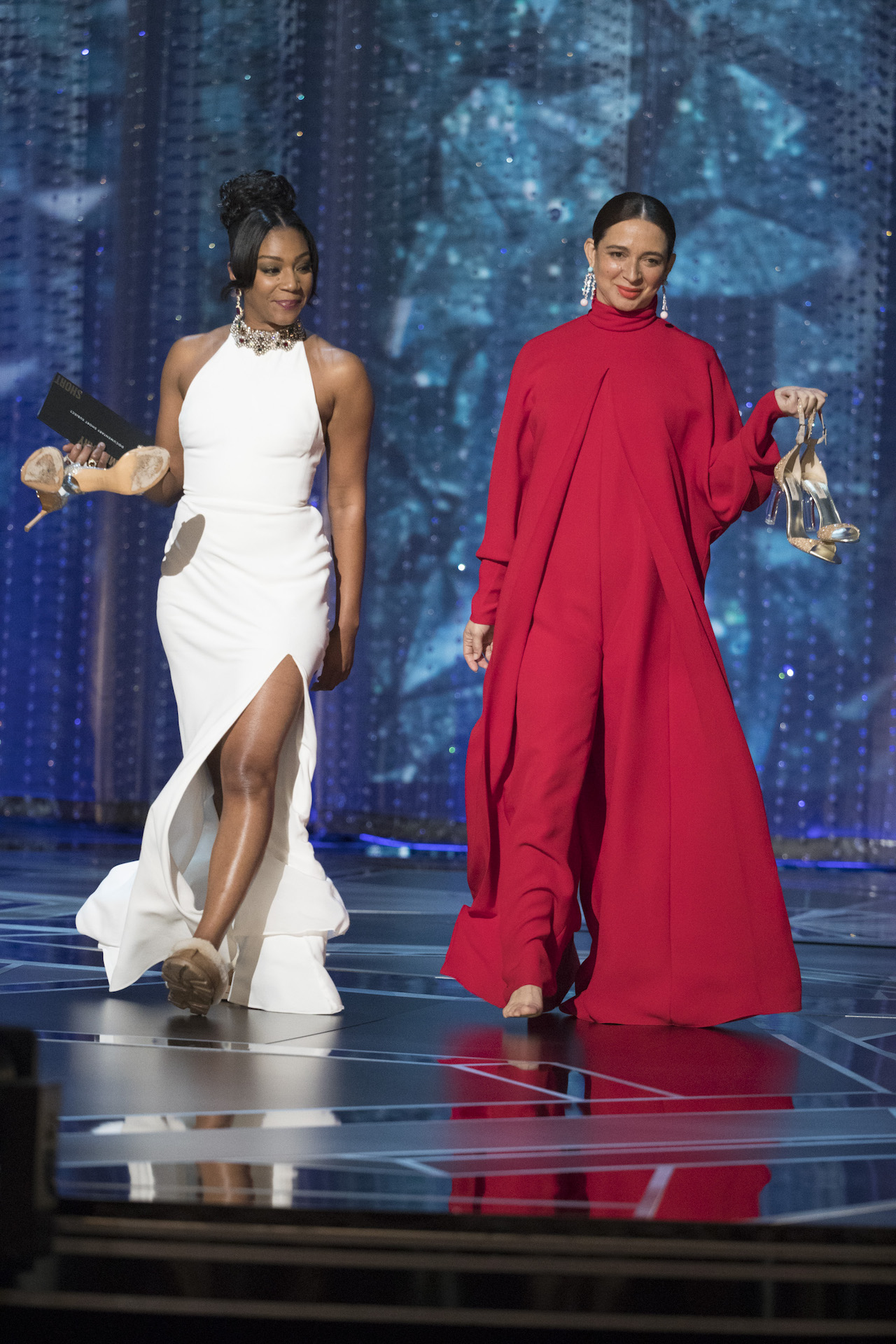 This year’s Academy Awards promised to be one of the most dramatic broadcasts ever with America’s current political climate, the fall of Harvey Weinstein and the #MeToo and #TimesUp movements that followed. But did Oscars 2018 live up to the hype? Here, a rundown of all the biggest moments — the good, the bad and the girl power.

Jimmy Kimmel is the definition of bleh 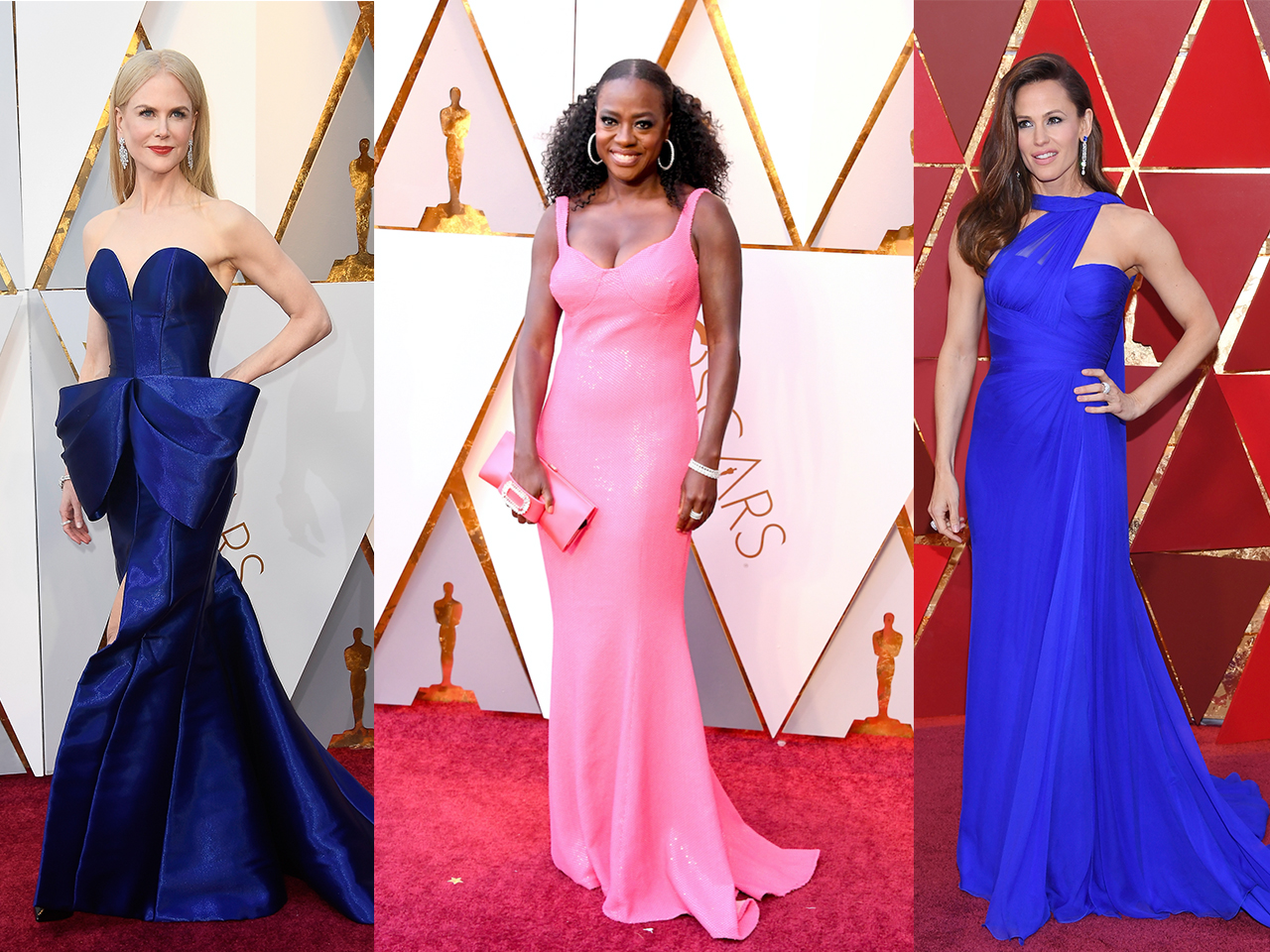 All The Most Heart-Stopping Looks On The Oscars Red CarpetEarlier this week, the host of Jimmy Kimmel Live! said he still hadn’t figured out how he was going to address post-Weinstein Hollywood in his opening monologue. And then, one can only assume, he ran out of time. How else to explain the cringey joke about how Oscar (as in the gold statue man) is unthreatening because he doesn’t have a penis. Or the one about how Tonya Harding must have broken someone’s knees to get an actress as pretty as Margot Robbie to play her? It’s true Kimmel “went there” in terms of talking about the cultural context of this year’s ceremony, and he had some decent zingers (“I remember a time when studios didn’t believe that a woman or a minority could front a superhero film… And I remember that time because it was March of last year), but after seeing Maya Rudolph and Tiffany Haddish present an Oscar together, was there anyone who didn’t think they should have just hosted the whole thing? By comparison, Kimmel’s schtick felt not just male, but stale. 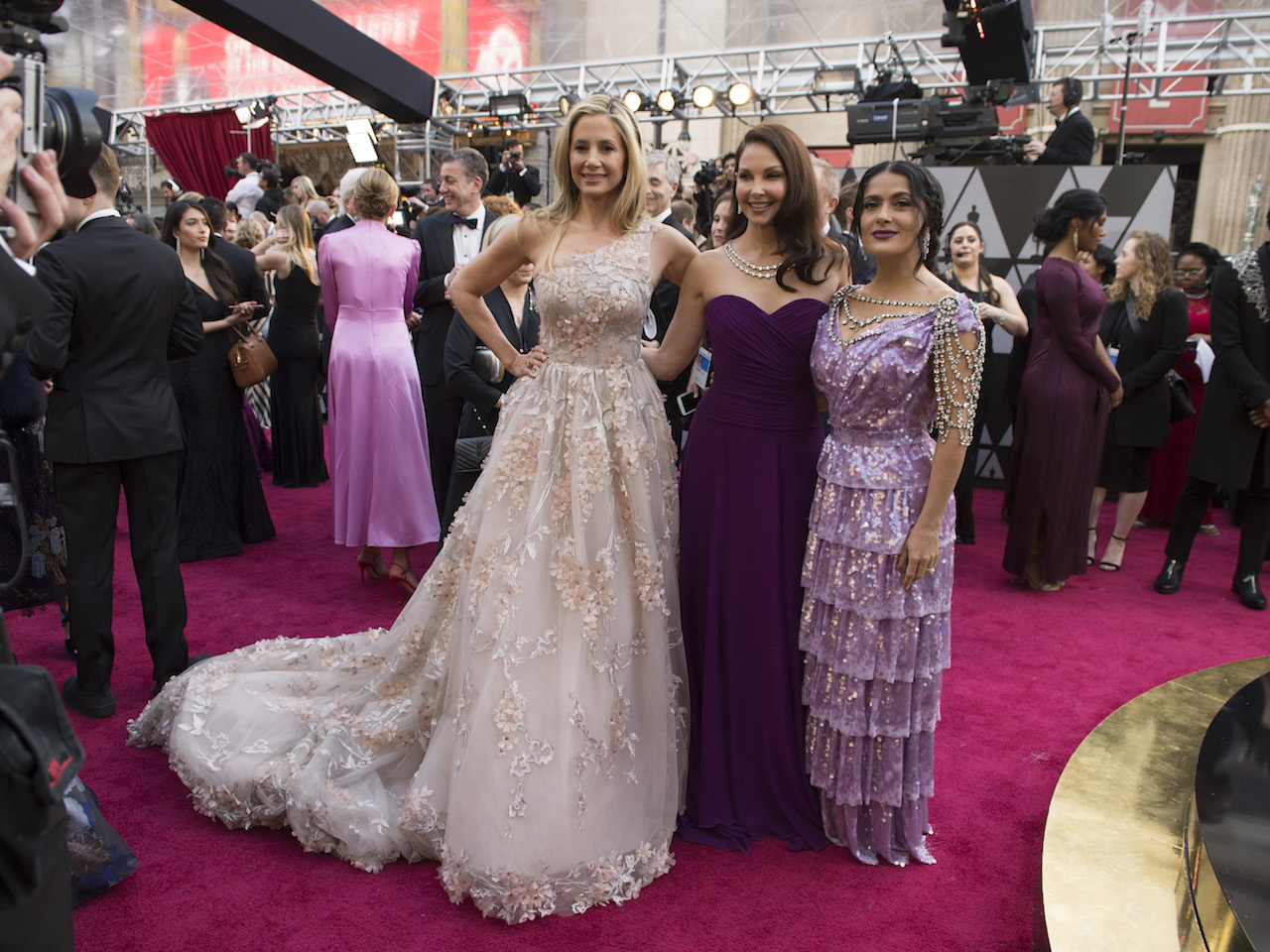 The most noteworthy couple of the night wasn’t Warren Beatty and Faye Dunaway, who returned to present Best Picture (minus the mix-up). After coming forward as two of the original voices against Harvey Weinstein, Ashley Judd and Mira Sorvino took a well-deserved victory lap on the red carpet, attending the ceremony together as dates. ’90s trivia alert: The actresses co-starred in the 1996 made-for-TV biopic Norma Jean & Marilyn. More recently though, both have been instrumental in the fight to end sexual inequality in Hollywood and beyond. “I’m joyful tonight,” Sorvino told Entertainment Tonight. “I feel like so happy that telling the truth actually leads to change…and we’re not going to stop until this behavior and sexual misconduct isn’t anymore for anyone, not just people in Hollywood.” 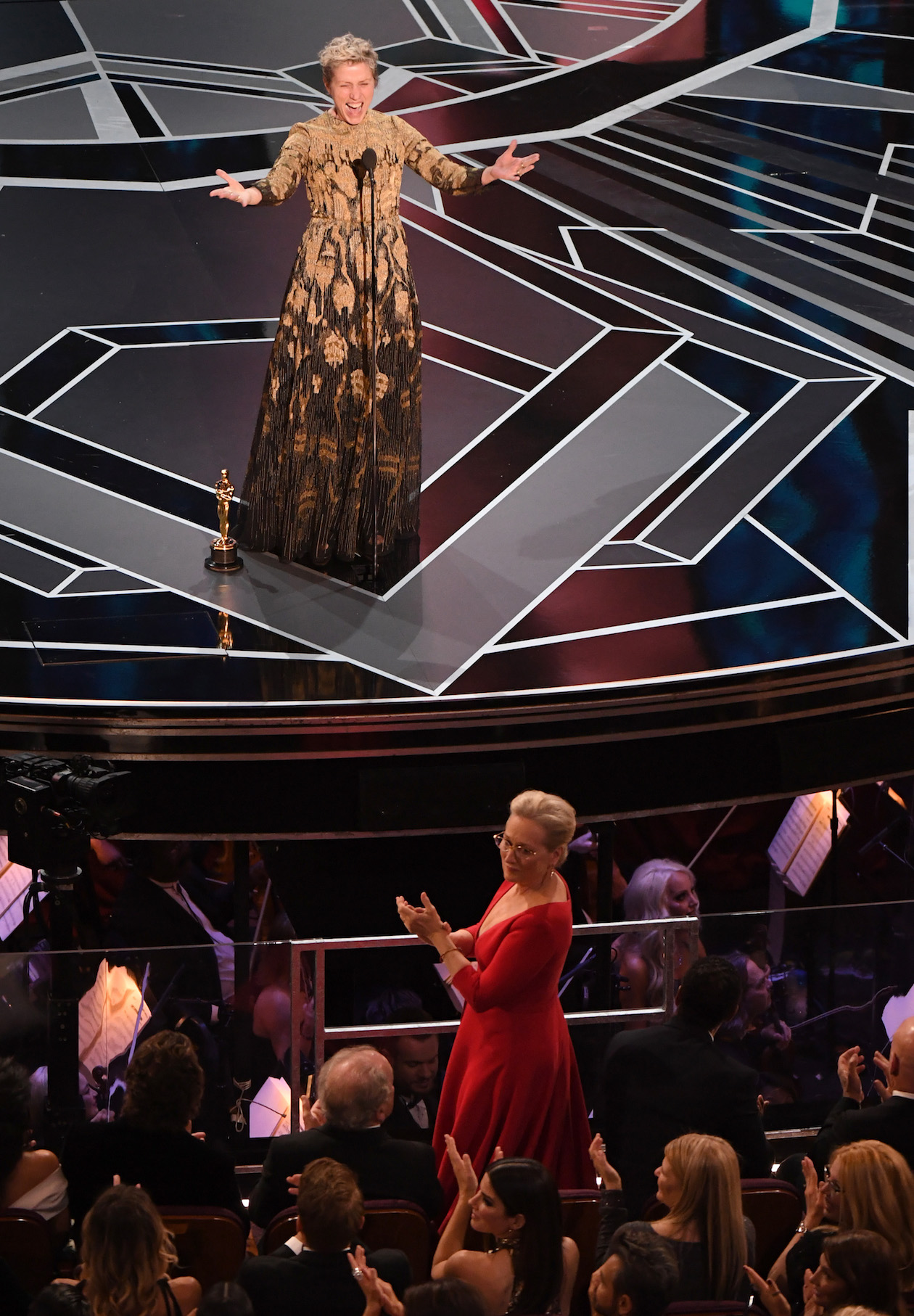 A night for wonder women

Celebrations of sisterhood continued into the ceremony when Judd, Salma Hayek and Annabella Sciorra spoke on the importance of #TimesUp. Laura Dern and Greta Gerwig presented the award for Best Documentary holding hands; Jane Fonda and Helen Mirren were similarly hand-in-hand when they walked onstage to present. Maya Rudolph and Tiffany Haddish officially became the new Tina and Amy after their hilarious presenters’ routine. The duo, who came onstage holding their stilettos, joked about #OscarsSoWhite: “I know what you’re thinking,” Haddish said. “Are the Oscars too black now? Don’t worry. We were just backstage and there are still a bunch of white people still to come.” And Best Actress winner Frances McDormand engineered one of the night’s most inspiring moments by asking every female nominee in the audience to stand up. “We all have stories to tell and projects we need financed,” McDormand told the audience. “Don’t talk to us about it at the parties tonight. Invite us into your office in a couple days, or you can come to ours, whatever suits you best and we’ll tell you all about them.” 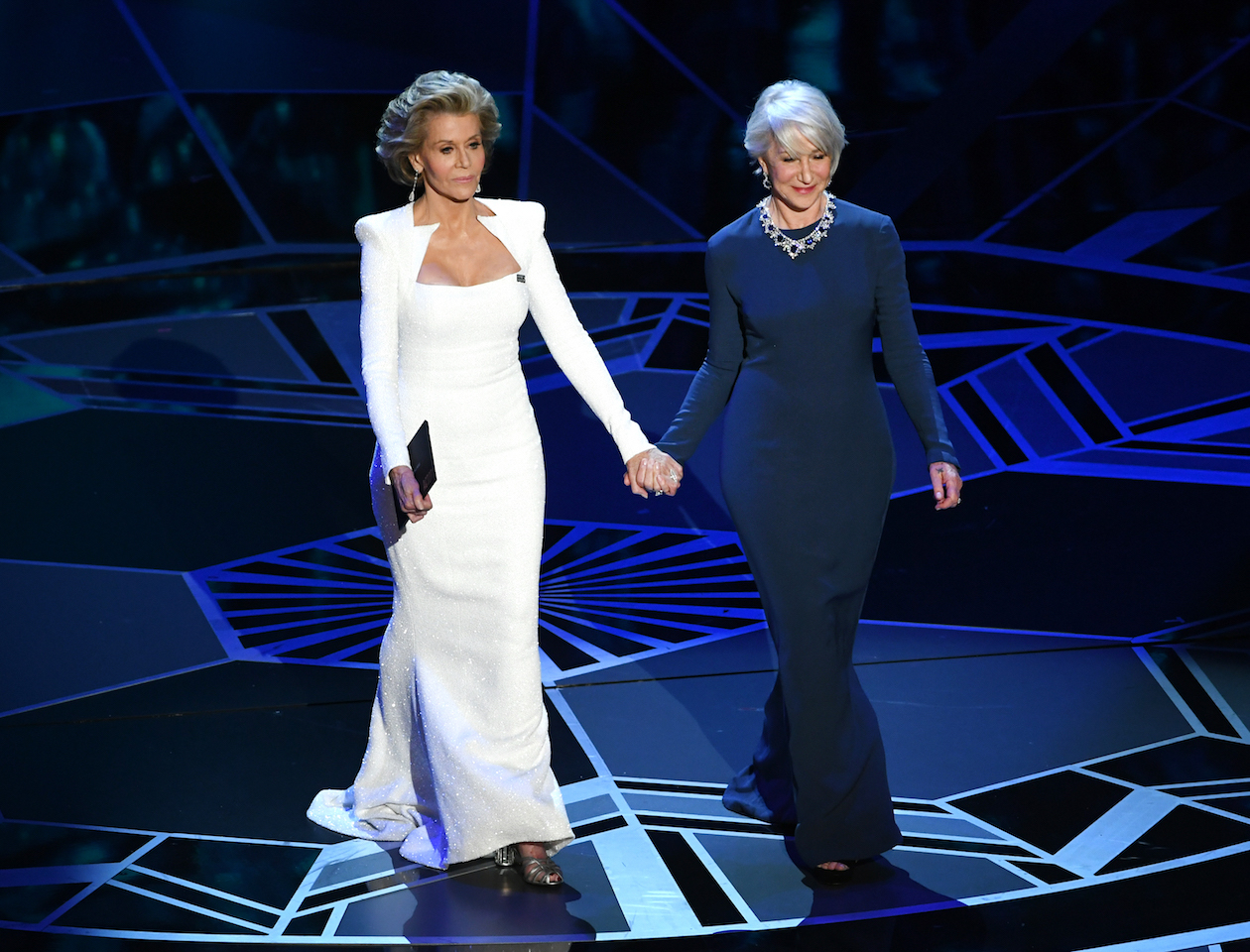 And the Oscar for most the embarrassing snub goes to…

Donald Sutherland is a Canadian legend, but when it comes to our country’s star system, The Hunger Games actor could clearly use a refresher course. During an interview with Ben Mulroney — longtime eTalk shiny guy and son of Canada’s 18th prime minister — Sutherland was surprised to learn that Mulroney is a fellow Canuck.

And the Oscar for lamest stunt…

Ever since Ellen DeGeneres took her famous Oscar selfie, hosts have been trying to recreate that average Joe magic. Last year, Jimmy Kimmel brought a bunch of regular people into the Dolby Theatre. This year the A-listers — Gal Gadot, Armie Hammer, Lupita Nyong’o, Margot Robbie, Emily Blunt and Mark Hamill — went on a mid-Oscar field trip to surprise movie-goers attending a screening of A Wrinkle In Time across the street. Cue the screaming theatre crowd (and a somewhat ill-considered hot-dog cannon). It was … um … odd. “This is so much better than the Oscars!!” proclaimed Gadot to a crowd that was probably thinking, “Well, it’s nowhere near as good as A Wrinkle In Time!” 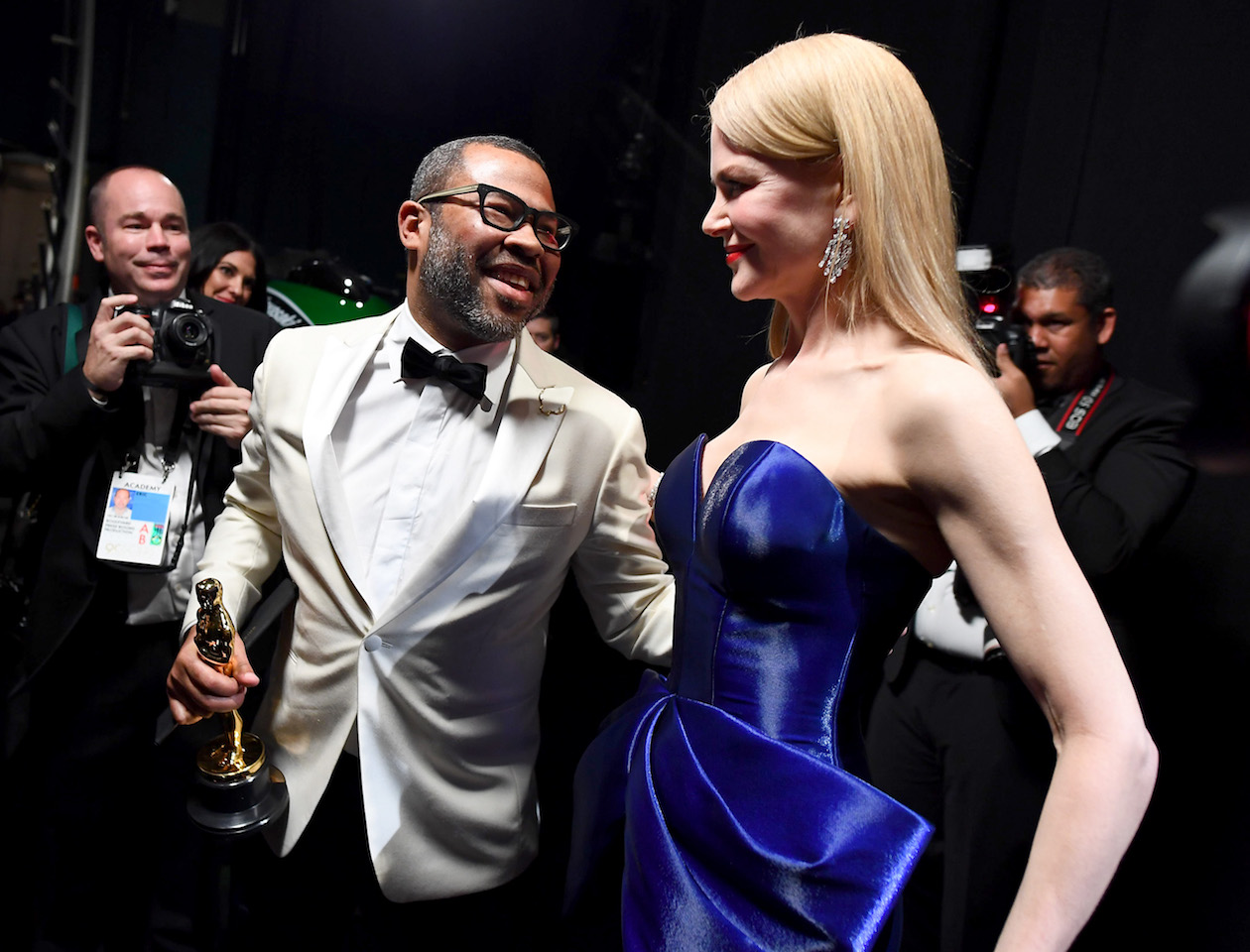 Jordan Peele celebrates his Best Original Screenplay win for Get Out with Nicole Kidman. Photo, Matt Petit/A.M.P.A.S via Getty Images.

The actual Oscars went to…

Oh, right — those. The vast majority of hardware went to the people who everyone thought they were going to go to: Frances McDormand and Sam Rockwell won for Three Billboards Outside Ebbing, Missouri, Allison Janney for I, Tonya and Guillermo del Toro for Best Director and Best Picture for The Shape of Water. Jordan Peele’s win for Best Original Screenplay for Get Out was probably the biggest welcome surprise of the night. Less surprising was the fact that the ceremony ran over  — more than 3.5 hours, at the end of which, we were all this lady with the book.

Toronto gets a shout-out

In his acceptance speech for best production design for The Shape of Water, which was shot in part in Toronto, Canadian Paul Austerberry said: “First of all, thank you to all the Canadian crew who are partying right now at the Palais Royale in Toronto. This is for you.” 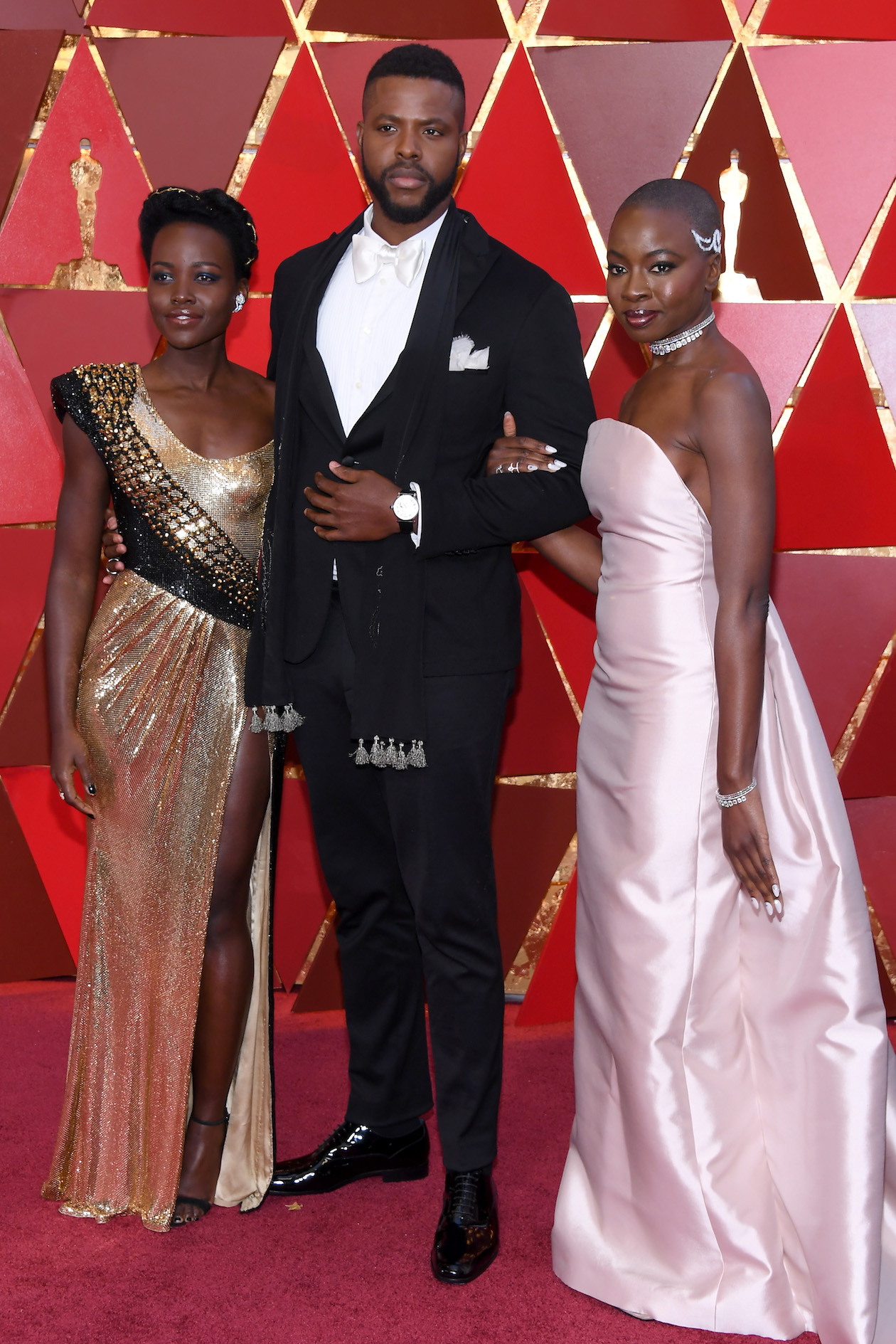 Earlier this week, Ryan Seacrest’s former assistant went public with allegations of sexual assault and harassment, leaving E! with an awkward decision around whether to bench their golden-tinted goose. Over the weekend, rumours circulated that publicists would ensure their big clients didn’t talk to Seacrest, while #MeToo founder Tarana Burke told Variety that he should not be there. Ultimately though, E! chose to stand by their man, which may explain why a lot of prominent stars skipped the standard Seacrest stop-and-talk, including Judd and Sorvino, Viola Davis, Margot Robbie, Nicole Kidman, Sandra Bullock, Jennifer Lawrence, Emma Stone, Greta Gerwig and Jennifer Garner. Actresses who did speak with Seacrest included Allison Janney, Mary J. Blige and Taraji P. Henson, who told him that ‘The universe has a way of taking care of taking care of good people…Know what I mean?” (People on Twitter assumed that was covert shade, but Henson has since said that her comments were misconstrued and that she supports Seacrest.)

At the Golden Globes, Portman presented the trophy for Best Director, cheekily declaring, “And here are the all male nominees…” At the Oscars, it was Emma Stone’s turn to display similar sass. Announcing Best Director Oscar category she called out, “the four men — and Greta Gerwig — nominated for best director…”

In 1961, the now 86-year-old actress won an Oscar for her role in West Wide Story. This year she was back to present, sporting the same vintage gown almost sixty years later.

Despite rumours that Jolie might attend the 2018 ceremony in support of her movie The Breadwinner, the actress was a no show. Good thing, too, because nobody was out-legging Henson in custom Vera Wang. In an interview, the Empire actress said the slit could have gone even higher. 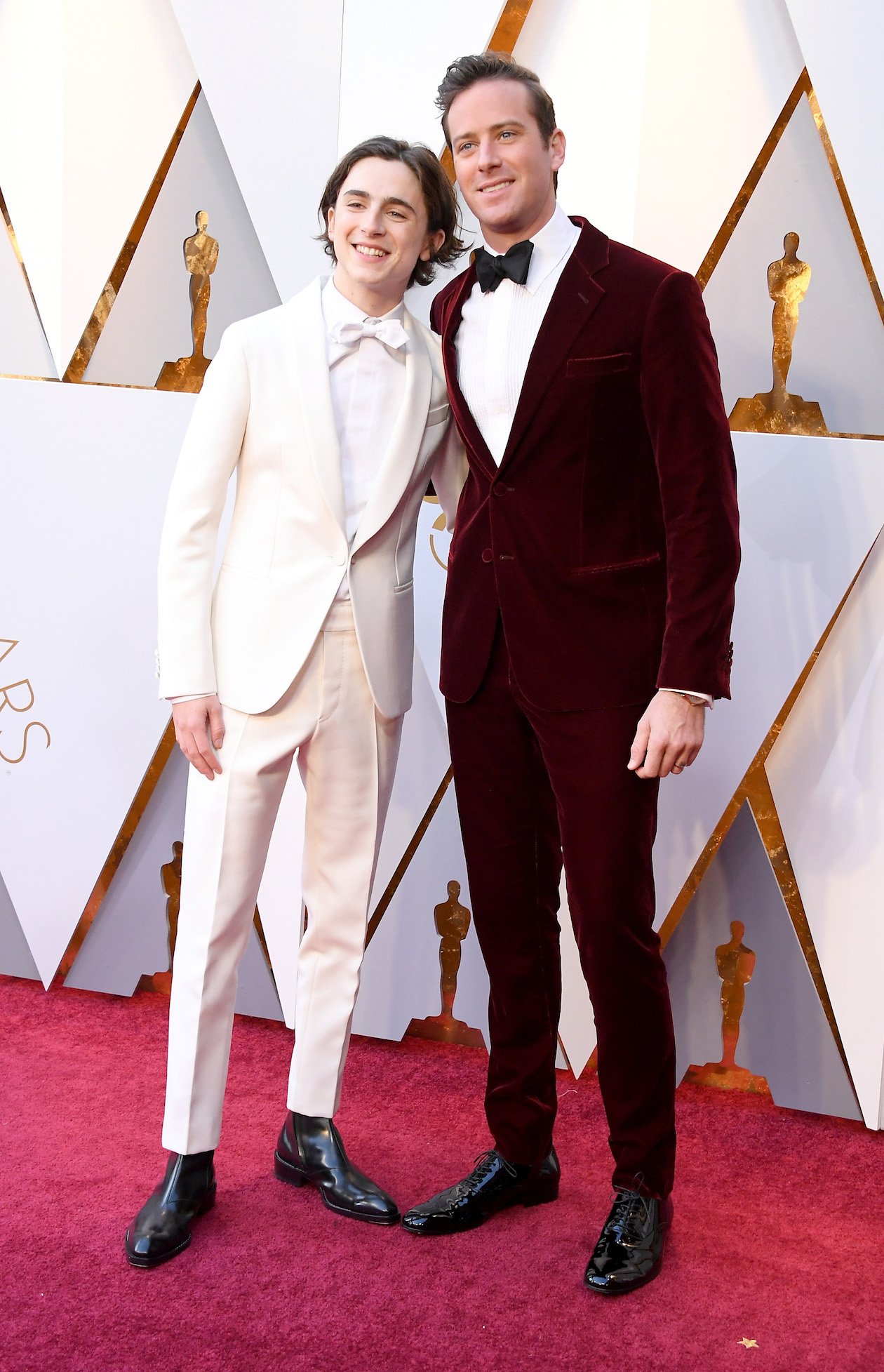 The dudes brought the dapper

Armie Hammer in burgundy velvet, Daniel Kaluuya in black-and-tan, Timothée Chalamet in all-white and Olympic figure-skating sensation (and Chris Pence feud partner) Adam Rippon in … hmmm … let’s call it deconstructed lederhosen. No question there were some memorable red-carpet gowns, but a lot of the male fashion statements were a refreshing escape from the standard penguin suit snooze-fest.